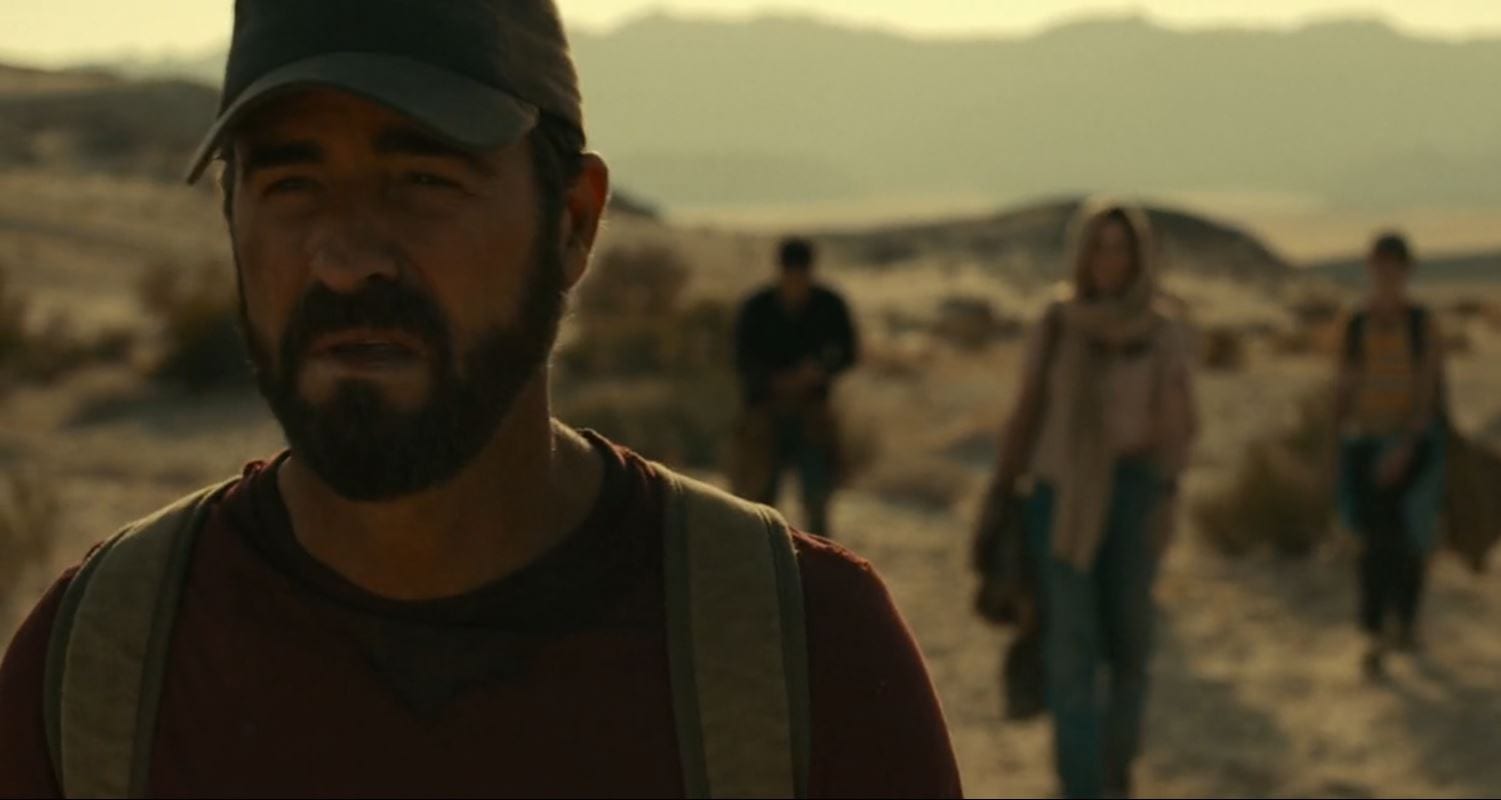 The Mosquito Coast is an American TV drama based on the novel of the same name by Paul Theroux. Developed by Neil Cross and Tom Bissell, the series started airing back on 30th April 2021, with two episodes. The series also stars Paul Theroux’s nephew, Justin Theroux, in the main role. The show also rounds off its main cast with Melinda George, Logan Polish, and Gabriel Bateman. Allie was an inventor with quite good ideals. He used to do odd jobs while living off the grid with his family. One day as Margot, Allie’s wife makes a risky call, they are tracked down by Agent Jones and Voorhees. Unknowing what they are being tracked down for, Allie and Margot decide to take on a dangerous quest. They decide to uproot their family and leave their place again to flee into Mexico safely away from the US Government.

Allie convinces his daughter, Dina, to take their family and leave America. They meet up with Margot and Charlie to set off on their journey. Meanwhile, they are being tracked down by Agent Jones and Voorhees. As Dina makes a call to Josh, the call is intercepted by Jones to be made use to interrogate. But as soon as Dina hears his voice, she chooses to stay silent and hang up the phone. Allie had previously contacted Hector to convince Juan, a coyote in Arizona to smuggle his family off to Mexico. But this information reaches the two agents as they interrogate Hector. As Juan and his friend Chuy take the family to Mexico, they have an encounter with the militia. This soon leads to a shootout which sees Juan pass away. Meanwhile, Chuy and the Fox family survive and continue their journey to Mexico on foot.

Allie, Margot, Charlie, Dina, and Chut are now on foot on their journey to Mexico. They are short on water, making everyone desperate for reaching their destination. Allie, who has seemingly started to lose it comes up with a plan. Considering the family will not be able to make any call, they will have to use Chuy. But considering they are miles off any network coverage, they must think of some new idea. Allie soon thinks of making use of an emergency beacon to make contact with any of Chuy’s friends. With the possibility of getting paid highly, Chuy accepts as they set forth on their long journey.

Here in this journey, they are to pass a bombing field which according to Allie is mostly safe. During this, as a helicopter is around their range, they run off to hide in one of the destroyed residences. Here, Allie decides to salvage water from the water bottle of a corpse. As they head ahead, Margot expresses her concerns about Chuy and how she doesn’t trust him. But she has a bigger cause for concern in Allie, who is coming up with wavered plans to flee the country. Dina is also trying to figure out what is up with her dad and what might he have done that her whole family must leave the country. Even Chuy discusses his family matters and suggests how Margot should take her children and go back to their home. Allie could possibly a threat to be around.

To reach the Emergency beacon will take a lot of time, so Allie decides to take a shortcut but Chuy isn’t fond of this plan. He doesn’t want to go there, but Allie convinces him on the grounds that they are short of water. While they pass through the way, they discover a place full of corpses. Chuy suggests that they must not be touched or disturbed as it would be disrespectful to the souls. But Allie doesn’t care for it as he begins to search the corpses. During this, Charlie finds a gun with one of them that he decides to hide with him. During this, as respect, Chuy lights a candle for the dead. A little later as a group of Coyotes come through that way forcing the group into hiding. One of the Coyotes spots the candle and tries to hunt them down.

A snake was about to attack Charlie when Chuy saves him. This causes him to get bitten by the snake. Later as the Coyotes move, the Fox family tend to Chuy after which they continue their journey. They finally reach the beacon where Allie connects Chuy’s phone and finally receives some service. Chuy makes the call to his contacts convincing them to help the white American family. They later meet up at a spot where the family is taken away in a car. While another one of the rescuers starts tending to Chuy’s snake bite.

When will The Mosquito Coast Season 1 Episode 4 Release?

The Mosquito Coast Season 1 Episode 4 is set to be released on 14th May 2021. The episode will be titled “Bus Stop” and will be airing at 12:00 am EST. Except for the first two episodes that aired on the same day, The Mosquito Coast had a release pattern of one episode every Friday. If you wish to watch the latest episode just when it airs, you must change the above-mentioned time to your local time zone and tune in. The first season of The Mosquito Coast is set to have a total of seven episodes. For this, we also have the release dates of the remaining episodes along with their episode titles.

The Mosquito Coast Season 1 Episode 4, titled “Bus Stop” will finally have the Fox Family away from the desert. They are finally about to escape to Mexico with some of Chuy’s contacts. The last episode, we saw how Chuy got bitten by a snake while trying to save Charlie. Now that he is out of commission, we can only hope that the rescuers are able to save him. Most likely, that should be the case. This part of the season is about to be very pivotal, as the Fox Family will finally be within Mexican borders that will see the introduction of many new characters. The next episode should be pretty slow, considering that much of the episode will be ominous.

The rescuers had only accepted to come help after they learned that the Fox Family is White, American, and has some Political connections. Considering the stack of money Allie is carrying, that could all be forced out of his hands soon. So now that Chuy will be out for some time, the rescuers may have other intentions for the Fox Family. We would learn of them when we finally witness the next episode. We could possibly also see an appearance of the government agent Jones. He has been hotly after the Fox Family’s trail and could possibly save the Fox family from an impending danger in Mexico.

Cracks in the Family.

We can also see the cracks formed within the family. Allie has been all over the place with his plans and strategies, which had already got Margot questioning her decision to follow him without question. Now that Chuy has warned him to leave him and go back home, she just might. This can also be seen in the case of Allie’s son Charlie. He has always looked up to his father but now there could be some cracks. While they were scavenging dead bodies, Charlie found a gun but he chose not to inform his father of the same. This gun could become very pivotal in the upcoming plot of the story. Considering the ominous setting of the rescuers, it’s not far off to consider that Charlie may have to use it against one of them.

Where to Watch The Mosquito Coast?

The Mosquito Coast is available to watch exclusively on Apple TV+. Just like many other shows at the moment, The Mosquito Coast is also a streaming exclusive. The first three episodes of the season are already available for one to watch. Apple TV+ even has a 7 day trial period that you can make use to watch all the episodes once it airs. If you wish to continue to use Apple TV+, you can get a subscription for it as well. The subscription cost for Apple TV+ is $4.99 per month. Considering that Apple TV+ is Apple’s direct-to-consumer streaming service, it is highly unlikely that The Mosquito Coast will be available on its competitors’ streaming services as well. Apple TV is filled with a plethora of exclusive content such as See, Foundation, Servant, Dickison, and Defending Jacob.