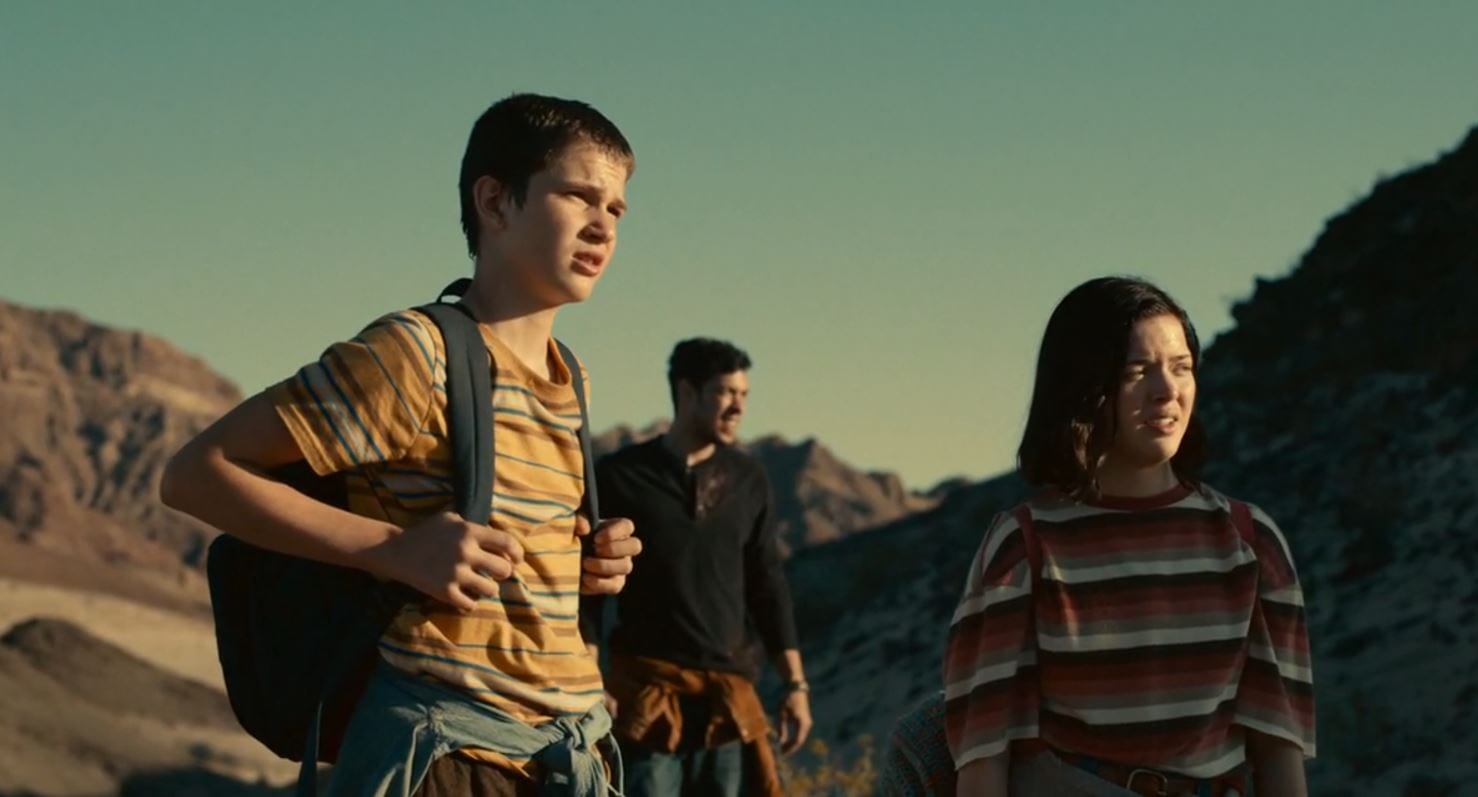 The Mosquito Coast is an American drama TV series based on the 1981 novel of the same name by Paul Theroux. This Apple TV+ show had its third episode released. And now, in this article, we will get The Mosquito Coast Season 1 Episode 3 explained. Allie and his wife Margot have been on the run for somewhere around 9 years. During this, they have even changed their identities six times. They have been living a minimalist life off the radar while Allie would work odd jobs to support the family. He was an idealistic inventor, who had amazing skills, but his talent wasn’t recognized, keeping the family away from a better life. One day as Allie heads off to take some used fuel for their car, he figures out that they are being tracked, which starts their journey to flee the country.

Initially, he convinces his family that they would move to Mexico, catch fish, and sip on the vine, but this hardly seems to be a fun trip. They are being tracked down by two agents by the name of Jones and Vorhees. So to try and flee from the country, Allie chooses to make use of a Coyote Group. They are typically hostile men, but Allie makes use of his smooth-talking skills to convince the two of them to help them out.

While the Fox Family, along with the Coyotes Juan and Chuy, head towards the Mexican border, they have an encounter with the militia. This causes a shoot-out where Juan passes away. So Chuy, along with the Fox Family, abandon the car as they head towards their journey on foot. This soon starts to look like a bad idea, as they are short on water, and the distance is too long to cover.

What happened in The Mosquito Coast Season 1 Episode 3?

The Fox Family, i.e., Allie, Margot, Dina, and Charlie, along with Chuy, survive the shootout as they are stranded on a deserted land. They are short on the water while the distance they need to cover is too long. Chuy, who just lost his friend Juan, is starting to hate Allie by the minute as his reckless plans have only made situations worse. Here they have a dispute which sees Allie on the ground saying that everything will be alright. The thing is, Chuy has some trouble in Mexico therefore, he cannot go back there. But due to the persuasion by Allie, and the lack of options he has, Chuy reluctantly agrees to be their guide. But the truth is that the distance they need to cover is way more than one would imagine. So, Allie finds a shortcut that goes through a bombing range.

This plan makes Dina anxious, which is soon shot down by Allie, who convinces everyone that only about 6% of the bombing range is used by the US military. As they head forward on their journey, they reached a mysterious place filled with bombarded buildings. This could have been a place for the military to practice their bombing for actual missions. This can be indicated by the fake building that seems to have no doors. Just then, a whirring sound approaches them, which happens to be a helicopter. The group runs off to hide in the buildings as the helicopter passes above them. Allie, who spots a corpse in the room, decides to salvage it for supplies, so he asks Chuyto to take the kids outside while he retrieves water from the corpse’s water bottle. 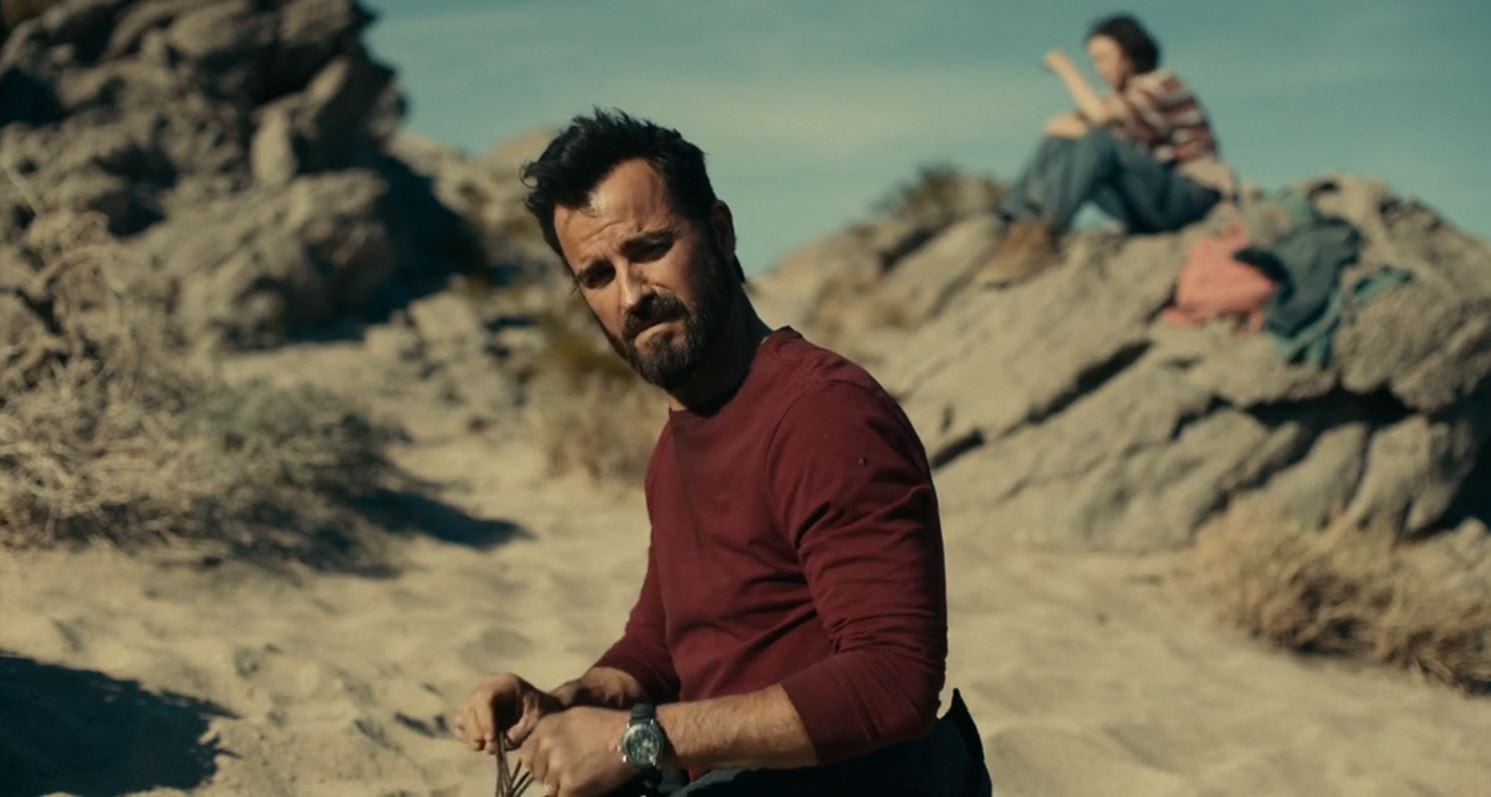 Chuy decides to upfront with the children to ask them regarding Allie’s past. He asks Dina in Spanish as to why the family was on the run. And what did Allie do that the US Government is after him? The truth is that even Dina doesn’t know as she can only make assumptions. While we have found out that Allie and Margot have been on the run from the Government for nine years, the reason still hasn’t been revealed. Margot says that Allie didn’t harm anyone, but the question further rises to what he did. While Dina kept questioning this, Charlie was blindly following his dad.

Chuy decides to open up with a concerned Margot. He reveals to him how he has a nine-year-old daughter named Ariella back in Mexico. But due to the money he owes to some dangerous people, he was not able to go back. Now that he was reluctantly heading there, he was planning to make things right and stay with his daughter. Chuy, who himself feared the safety of his daughter, tries to connect with Margot showing concern for her children. He expresses how Alli was going crazy, and his actions might just hurt her children. So Chuy suggests to Margot that she leave him and head back home with Charlie and Dina. 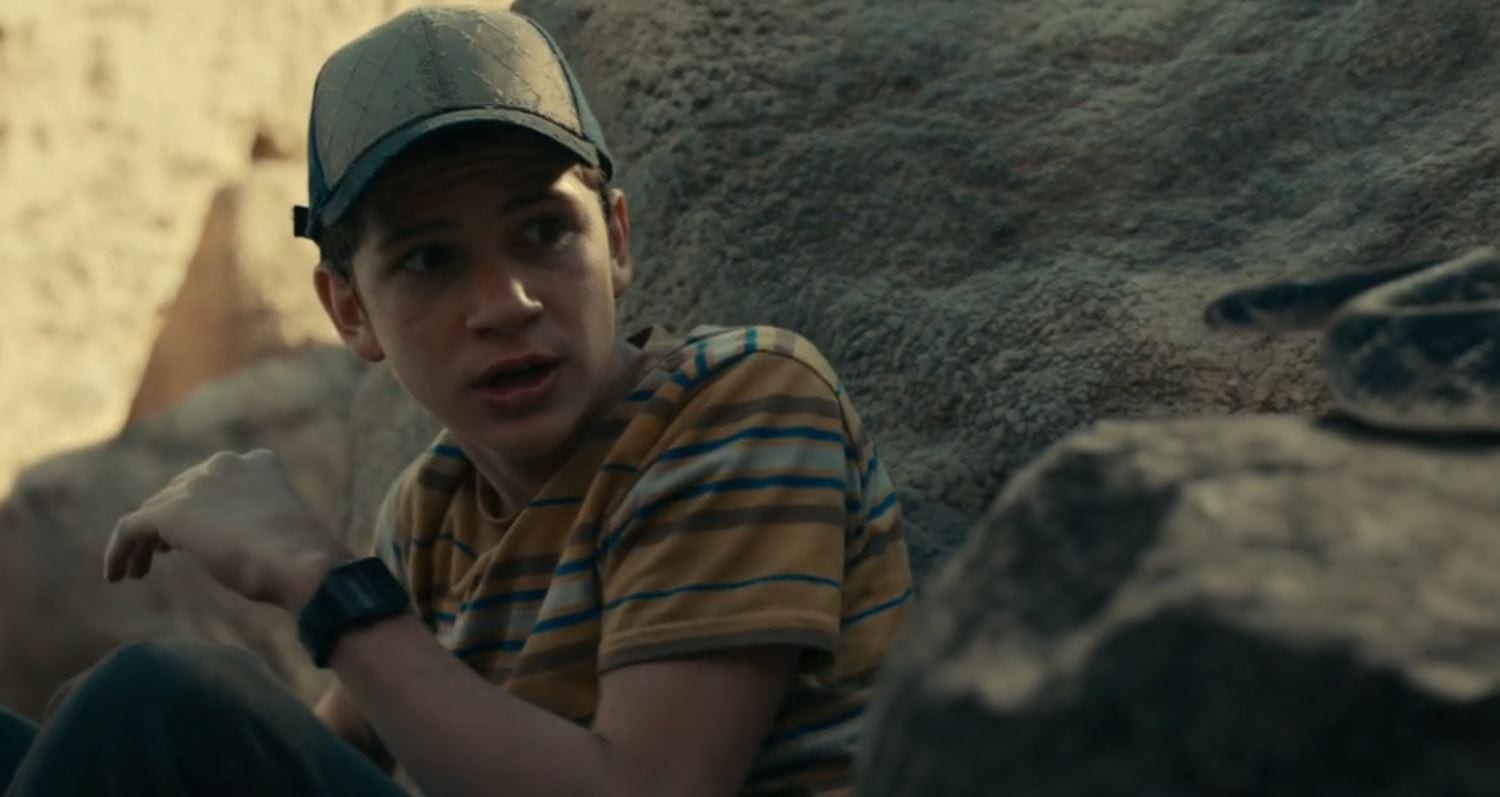 Charlie about to be attacked by a snake – credit Apple TV+

Even though the family had been traveling for two days, they still had to cover some distance. Allie had come up with the idea that they make use of an emergency beacon set at some distance. The plan was to contact one of Chuy’s associates to help them off to Mexico. For this, Allie was even ready to pay huge amounts of money. Persuaded by this, they plan to head there. Due to the shortage of water, they must take a shortcut through the hill range. Chuy refuses to do this out of some innate fear. But Allie is again able to persuade him out of fear of water shortage. They take the route during which they reach a very mysterious place. The place was filled with rotten corpses who had died due to some unrevealed reason.

Chuy suggests that no one should disturb their bodies, but Allie decides to salvage them for resources. While Chuy lights a candle with respect to the dead, Charlie finds a gun. But rather than informing his dad, he chooses to hide it in his bag. Just then, a large group of Coyotes heads towards them, so the group is forced to hide. But one of them spots the lit candle, therefore, he searches the area for anyone who had been hiding there. The situation only became worse when a snake approached Charlie from behind. Chuy came to his rescue but got bitten by the snake. After the Coyotes continue their journey, the Fox family runs to Chuy to tend to his wounds. They must reach the beacon soon and make contact so that Chuy could get cured. 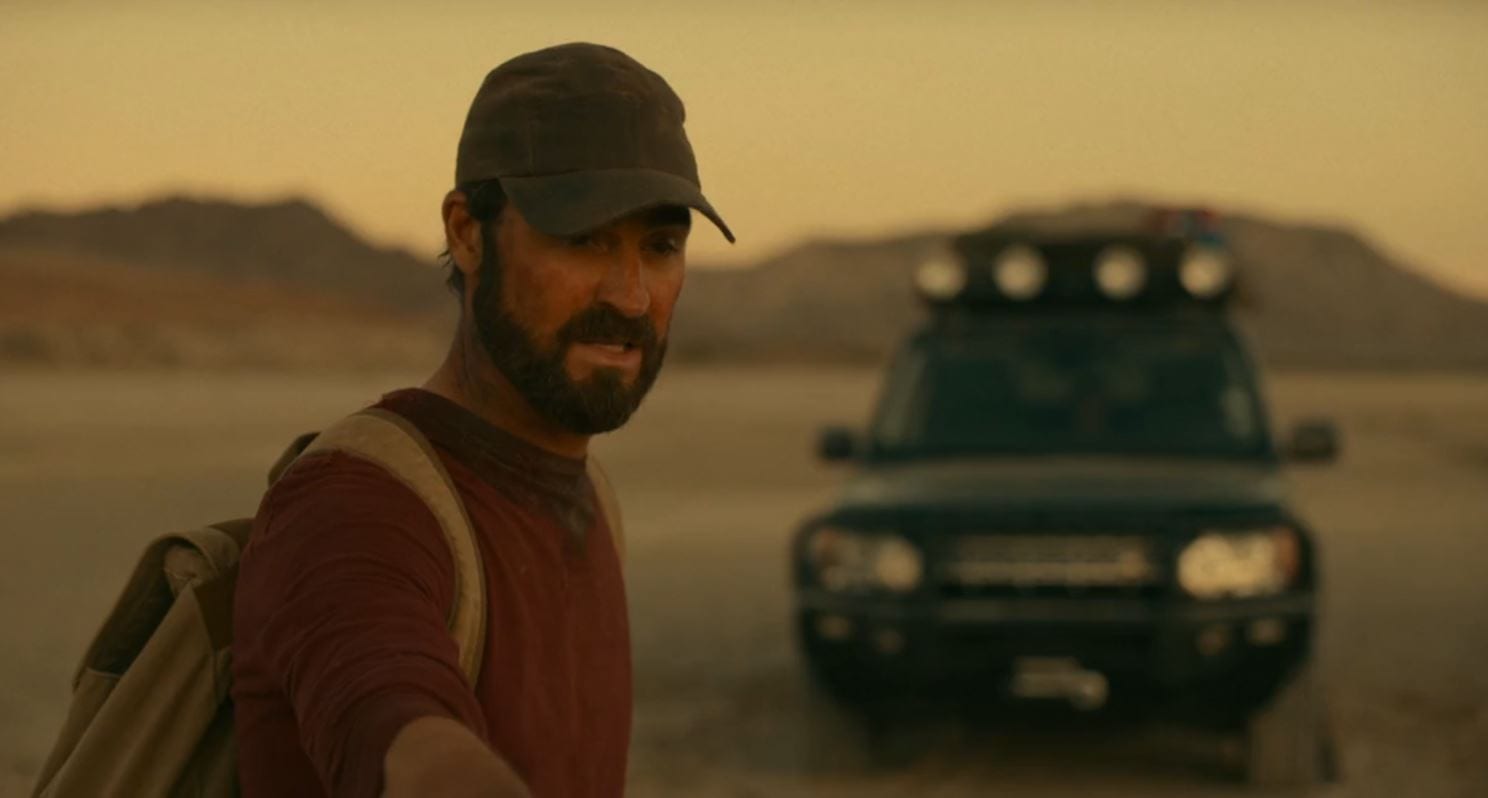 The group continues their journey when Chuy starts to see the effects of the snake bite as he falls down. Just then, they are able to spot the beacon. So, Allie and Margot help him walk all the way there so that he could finally make the phone call. Allie takes Chuy’s phone to configure it in a way that it receives the signal. Originally the emergency beacon is for immigrants who want to contact border patrol, so the configuration is important. Allie is able to tap into the network, allowing Chuy to make the call. Chuy makes the call as he convinces them to help by saying that the family which needed help were White Americans. Hearing this, the guys on the line ask them to reach some Church ruins from where they will get picked up.

Chuy falls unconscious while the family creates a makeshift stretcher to carry Chuy to the Church ruins. Here they spotted two men with two vehicles. One of them is polite with the family as he asks them to sit in the car, as they had to leave just then. Meanwhile, the other guy starts to tend to Chuy’s snake bite. Margot is a little reluctant to leave Chuy but is again convinced by Allie that they leave Chuy with the rescuer’s care. 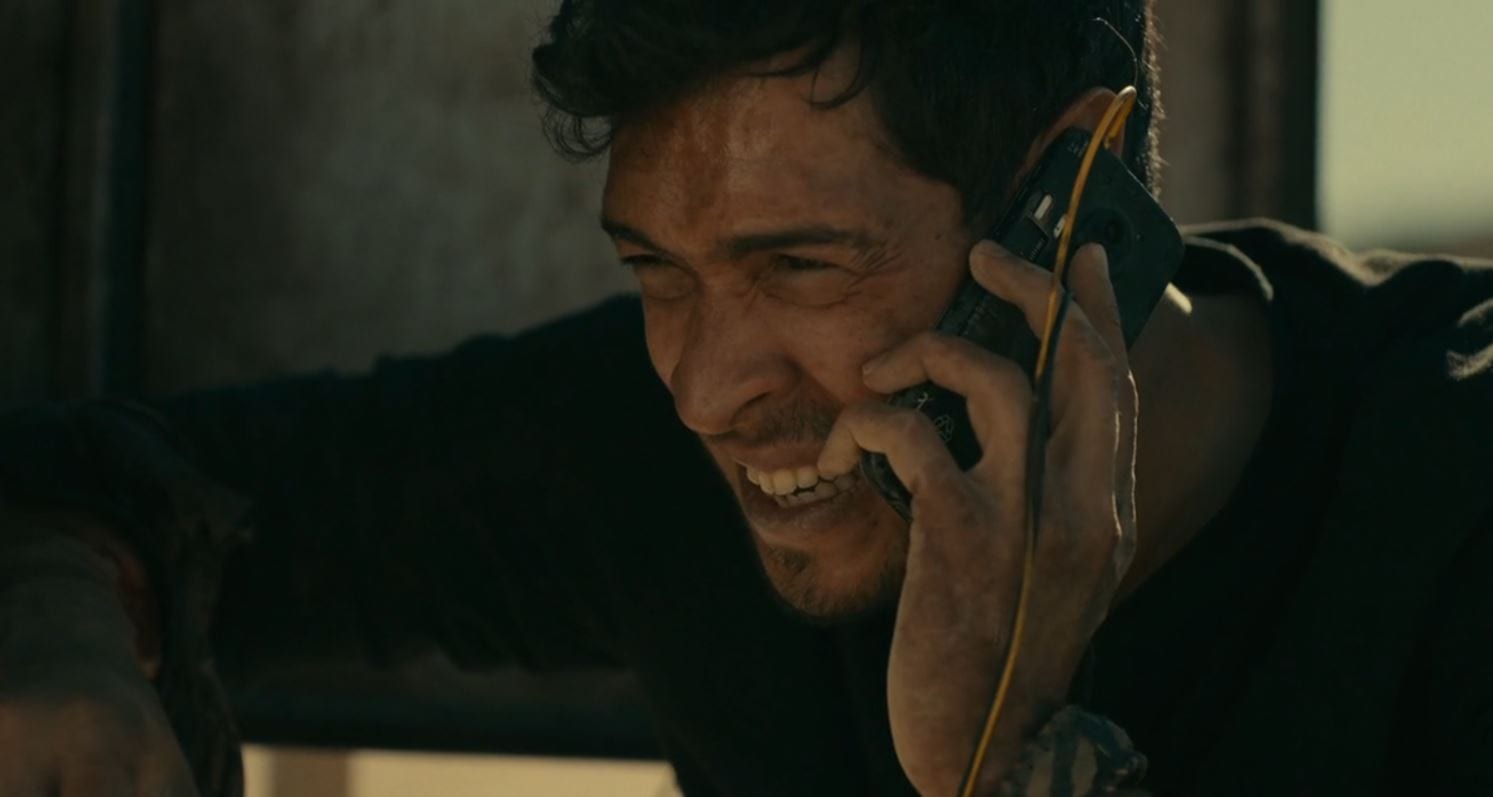 Chuy on a call with the rescuers – credit Apple TV+

Chuy has been bitten by a snake and has started to receive some treatment from the rescuers. Considering that he was able to survive this long, it can be assumed that the snake wasn’t the most poisonous one. Considering that there has been son ominous feeling with regards to the rescuers as to how they were convinced, it makes reason to believe that Chuy will survive. The rescuers only accepted to help after they learn about the family’s race. Also, taking into account that Chuy has connected with Dina and Margot, he could try and help them out from any impending dangers when they reach Mexico.