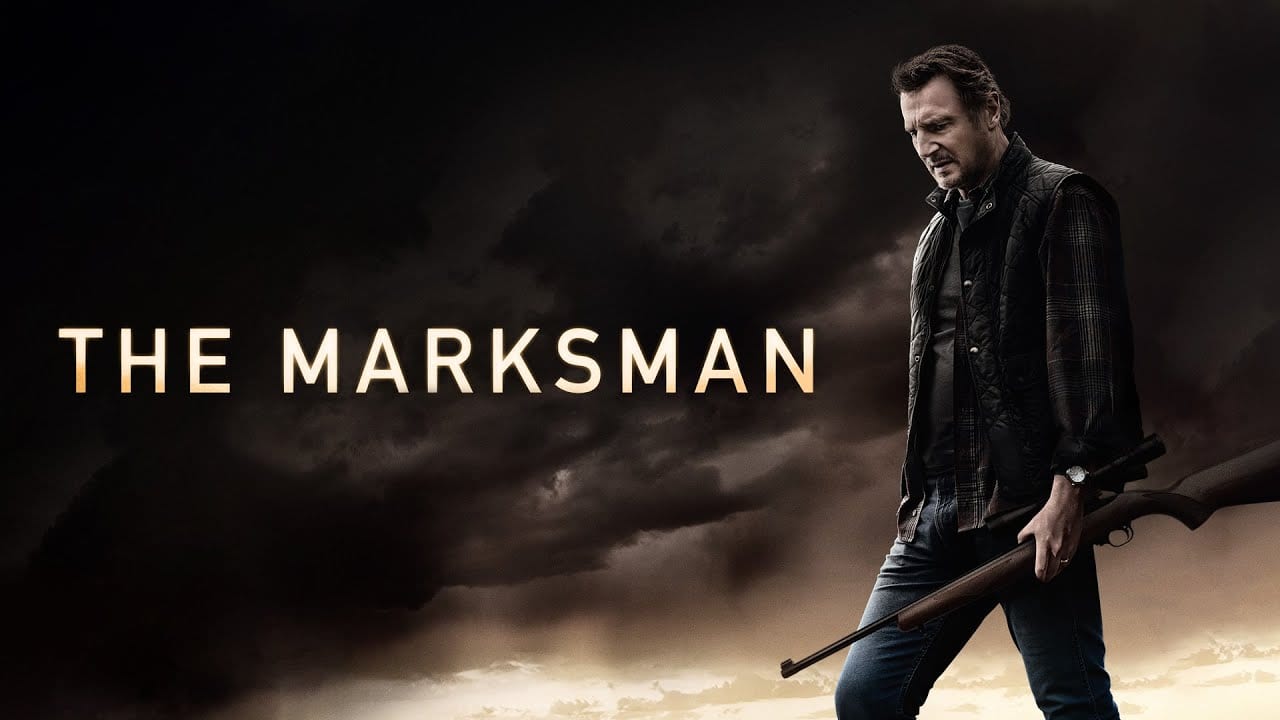 The Marksman is a 2021 action thriller directed by Robert Lorenz. Chris Charles, Lorenz, and Danny Kravitz have penned the screenplay. Music is given by Sean Callery, and Mark Patten handled the cinematography. Tai Duncan, Mark Williams, Warren Goz, Eric Gold, and Robert Lorenz have produced it. And Open Road Films and Briarcliff Entertainment have distributed the film. The premise of the film involves a rancher and a former marine who lives in a town on an Arizona border. His quiet life is perturbed when he encounters a young refugee boy who he must save from vicious drug cartels. Liam Neeson plays the former marine, while Jacob Perez plays the young boy. 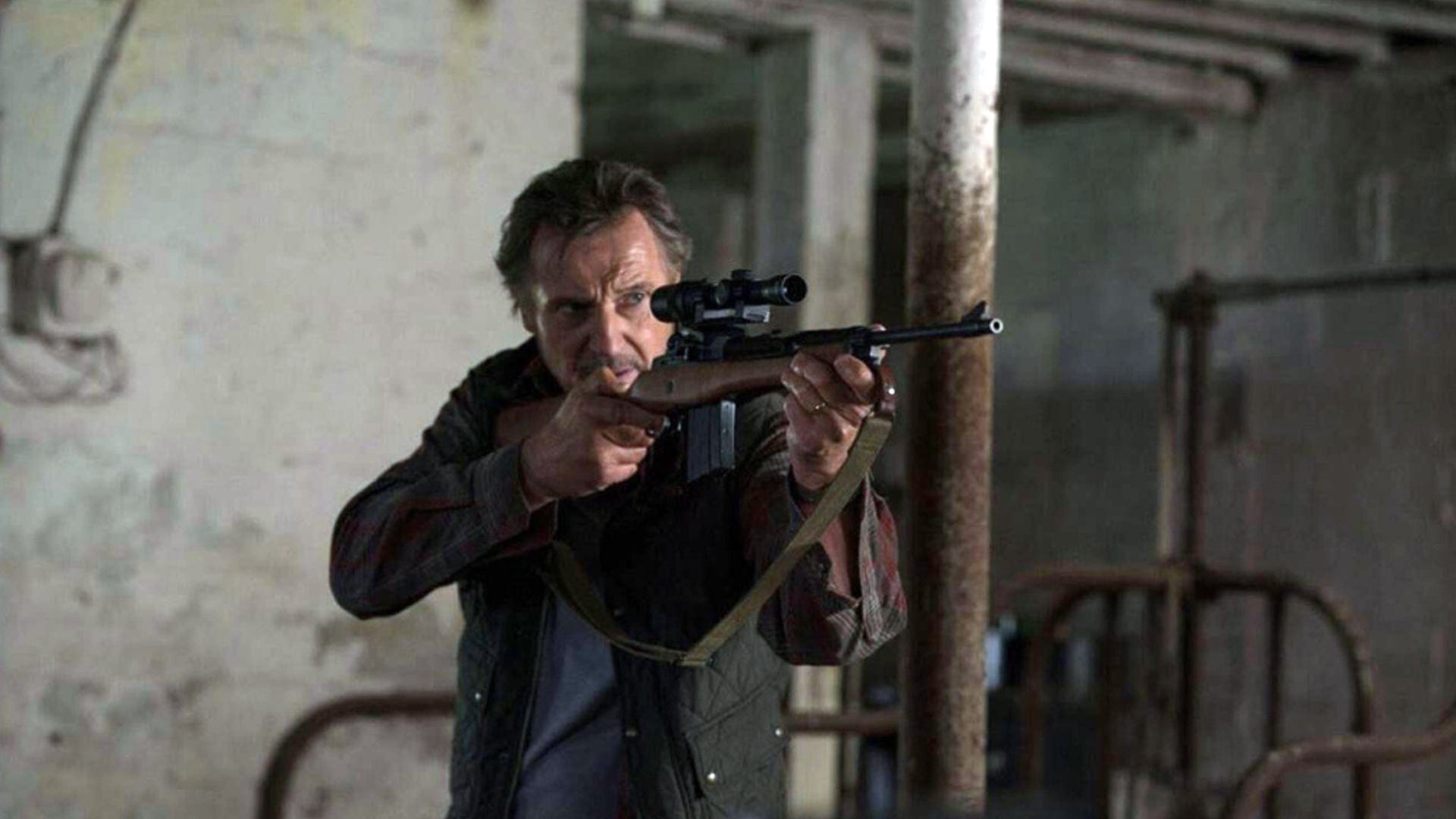 Liam Nesson plays a former marine in The Marksman (2021).

The Marksman — Plot in Detail

Jim Hanson lives a secluded life in peace along the Arizona-Mexico border. Jim Nia an ex-United States Marine Corps Scout Sniper and Vietnam war veteran. He reports attempted illegal border crossings to border patrol. One day, while on patrol, he comes across Rosa and her son Miguel. They are Mexican citizens who are escaping from a Mexican cartel. When Hanson encounters them, he calls the border patrol to report them. As he calls the patrol, he sees the cartel coming up. Very soon, he gets involved in a shout-out with the cartel. Mauricio is the leader of the cartel, and Jim kills his brother in the shootout. However, the shootout also leads to Rosa getting fatally wounded. As she dies, she gives Hanson a note that contains the address to her family that lives in Chicago.

Hanson is reluctant but eventually agrees to take her son Miguel to her family in Chicago. Rosa dies, and the border patrol shows up. However, one of the members of the cartel shows up and claims Miguel is his child. Hanson spots them and their car. He then sneaks Miguel out of there and heads off to Chicago to reunite him with his family. Meanwhile, the cartel uses fake passports to get into America. They follow Miguel and Hanson as they get into America with relative ease. We see a corrupt border patrol officer who lets the cartel in, despite their gang tattoos and sketchy appearances. They’re allowed to pass despite their fake passports.

Mauricio manages to track Hanson and Miguel down when Hanson uses his credit card for his truck repair. There’s another corrupt cop who follows and tracks the two down. He follows them and pulls them over. The cop then tells Hanson to get in the police vehicle while he talks to the boy. He doesn’t talk to Miguel. Instead, he takes Hanson’s driver’s license and keys. He then also rummages through his pickup truck. Hanson realizes that the cop is corrupt. He then gets out of the vehicle and subdues the cop. He gets his keys and skedaddles away with Miguel. Mauricio and his cartel eventually catch up with the corrupt cop. They kill the cop while Hanson and Miguel watch it go down from a safe distance. 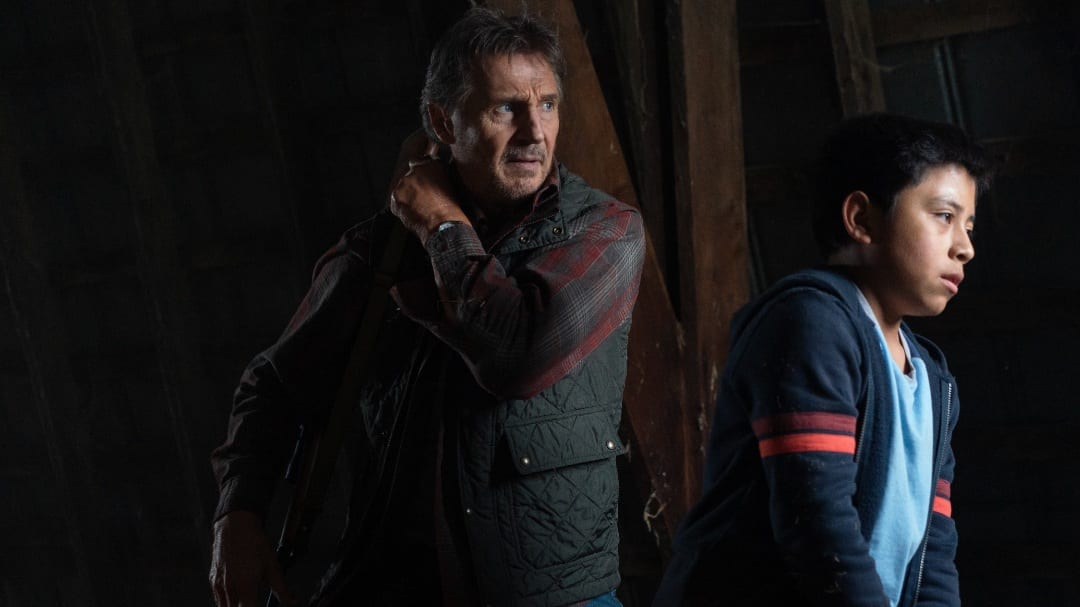 The duo proceeds to move north. On their way, they also stop at a church so that Miguel can properly send off his mother, Rosa. As they escape from the cartel, the truck’s radiator fails. They’re forced to stop as Mauricio, and the cartel catches up with them. They engage in a firefight on a nearby farm, and Hanson kills three members of the cartel. However, Mauricio manages to capture Miguel. Hanson then fights off Mauricio, who stabs him, but Hanson eventually emerges as the victor. After defeating him, Hanson leaves Mauricio with a single bullet. He tells him that he has two choices — he can either kill himself with the bullet or return to Mexico. Hanson and Miguel hear a gunshot as they leave the farm. They finally reach Miguel’s family in Chicago, and Hanson returns home on a city bus.

The Marksman is a Mostly Stale and Boring Experience

The Marksman adds to the long list of Liam Neeson features we’ve all become familiar with by now. He always plays a character with a particular set of skills. Somebody close to him or someone who he cares about is threatened and endangered. He then uses his set of skills to dispose of the villains. It might be repetitive and predictable but makes for good entertainment. One of the best features of a Liam Neeson flick is Liam himself. He brings his usual gravitas and seasoned skills to the table and elevates the movie. He’s one of the few action stars who hasn’t succumbed to just giving up on acting like Bruce Willis. But there’s only so much he can do to a film. If the film itself doesn’t have much going on for it, Liam can only hold it together so much.

This film doesn’t have much going on for it other than the star power of Liam Neeson. The story is nothing new, and the plot is very predictable. It’s one of those very familiar and predictable stories of a seasoned man saving a young life from the villains. And that’s what happens here as well. There’s nothing new to this story. The plot moves as you’d expect it to move. It’s overall stale and uninspired. Direct Robert Lorenz has produced a couple of Clint Eastwood movies. This might be the reason why the film feels like an Eastwood movie during the late part of his career. But this film doesn’t have the same kind of substance as an Eastwood film. The story is pretty stable and predictable. Neeson is also not much enjoyable as he doesn’t get to do all that much here. 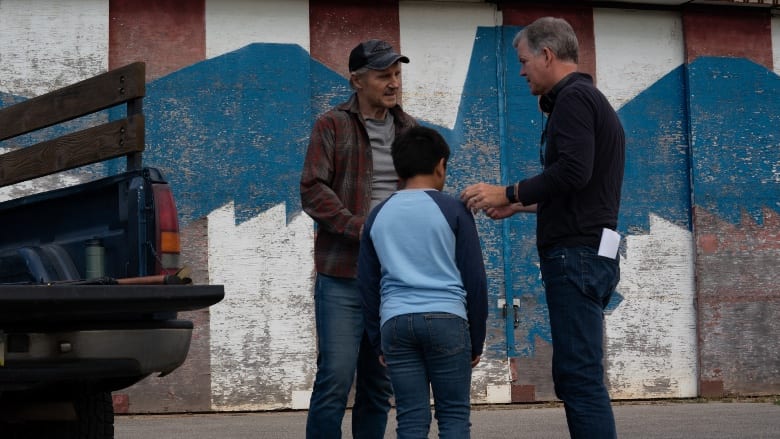 Robert Lorenz with the cast on the sets of The Marksman.

Liam is a supposed sharpshooter but only gets to flex his skills near the end. There aren’t energetic action sequences like the Taken movies. It’s pretty stale action-wise too. And for a movie with a lackluster story and predictable plot, lack of good action sequences makes matter worse. It feels as if Neeson is going through a routine; there’s not any originality to keep things exciting. The shootouts and then the hand-to-hand fight is not exciting or creative enough to warrant interest. Liam’s recent track record hasn’t been very good with action films that fail to emulate Taken. This film does away with even the exciting action sequences that will make it worth a watch. With boring stories and boring scenes, The Marksman fails to replicate the recent Neeson features, which themselves aren’t a big benchmark. One of the few redeeming parts of the movie has to be Neeson’s voice.

The acting perfect are alright, but the characters themselves are caricatures and lack any depth. They are all very generic and hollow. The story chooses not to delve deeper into the motivations of the characters. The cartel’s motivation or backstory isn’t fleshed out. They are just loud and caricaturish characters that make for good disposable villains. Even Neeson’s and Miguel’s characters aren’t fleshed out much. Miguel is shown to be a kind-hearted and sweet young boy. There’s nothing else to him, and Neeson has a considerable backstory, but it’s not explored. But one thing is for sure, the best part about a Neeson feature remains Neeson himself. He brings his charm and talent here as well, elevating the stale script, albeit slightly.

The Marksman is a contained and mildly enjoyable film. With poor writing, uninspired action sequences, and poorly developed characters, the film is an overall disappointing affair. Our rating for The Marksman is 2 out of 5.