"The Mandalorian: Chapter 8" entails a thrilling story and also concludes the first season. We will breakdown what goes down at the end of this Star Wars spin-off. 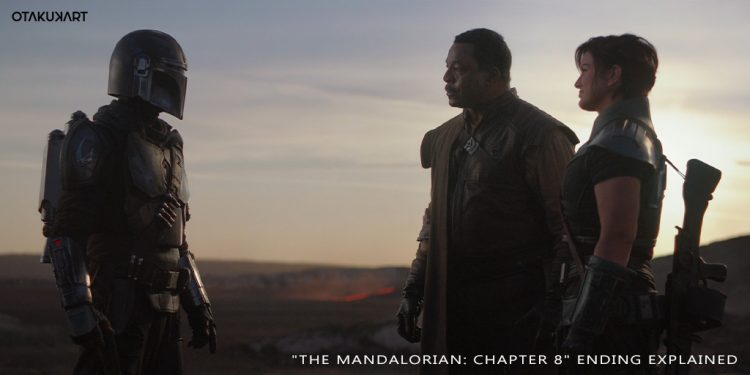 The 2019 space western series “The Mandalorian” was an enormous hit. But The Mandalorian: Chapter 8 ending got many fans with lots of unanswered questions. This series is a spin-off series of the infamous Star Wars franchise. Taika Waititi directed this Star Wars spin-off, whereas Jon Favreau wrote the screenplay and the plot for the series. The show features Pedro Pascal as Din Djarin, the title character of the show, Mandalorian. The series also features talented actors like including Carl Weathers as Greef Karga, Nick Nolte as the voice of Kuril, Taika Waititi as the voice of IG-11, Gina Carano as Cara Dune, Giancarlo Esposito as Moff Gideon, and Emily Swallow as “The Armorer”.

Further, the first season came out on November 16, 2019, and comprises eight episodes. Also, another eight-episode-long second season came out in 2020. A third season is under development which might release in 2022.

The series revolves around a lone bounty hunter, Mandalorian. He got a job to look after a mysterious child. But as the story continues, the bounty hunter develops an attachment to the child. The Mandalorian received lots of praise from the audience and critics for its directing and writing. Also, the actors were praised for their phenomenal performance in the series. The series has a magnificent plot along with mind-blowing action and VFX. However, the ending of the season one finale, The Mandalorian: Chapter 8, left the fans most confused. Thus, we will explain The Mandalorian: Chapter 8 ending in this article. Further, beware of reading this article as it will contain many spoilers. For avoiding spoilers, you can watch the series on Disney Plus before reading this article.

What Happens In The First Season’s Finale Episode?

The Mandalorian Season 1 finale is known as Redemption. The episode begins with two scout troopers kidnapping “The Child” or infamously known as Baby Yoda, among fans. Meanwhile, the imperial forces trapped the Mandalorian, Cara Dune, and Greef Karga in a building. The stormtroopers set an E-web cannon to threaten Mando and the two to come out of the hiding and cooperate with them. The leader of the stormtroopers calls Mando with his real name, Din Djarin, which shocks Mando. But he realizes that the leader is none other than Moff Gideon.

Karga informs that Gideon should be dead as he was executed. But Mando reveals that only Gideon knew his real name. Also, he further reveals that he doesn’t belong to the Mandalorian clan, but he was a foundling. When Din was a child, the Imperial forces attacked his home planet, where he lost his parents. However, a Mandalorian saved him and took him under his wing. Thus, Din was raised in the ways of Mandalorian, and he joined the creed. Further, Mando discovers a tunnel to sewers that he believes is the Mandalorian hideout. However, they were unable to open the way to the sewer. Meanwhile, IG-11 saves “The Child” and then rescues Mando and his friends.

After IG-11 joined with Mando and the crew, they retaliated against the stormtroopers. But Gideon injures Mando, forcing the team to get back to the hiding. Cara offers to help Mando, but to do so, he needs to take off the helmet. Mando, following his creed’s code, refuses to take the helmet off and advises Cara and all to escape from there and leave him behind. A stormtrooper attempts to kill Mando and his crew with a fire thrower, but “Baby Yoda” protects them with his “mystical prowess.” Everyone escapes from the sewer except for IG-11, who stays behind with Mando. Further, the Mandolorian asks IG-11 to kill him, as he would like to die in the hands of the droid rather than the Imperial forces.

What Happens In The Mandalorian Season 1 Ending?

Mandalorian wishes to die at the hands of IG-11. However, the droid refuses to follow those commands and tells him that he is now a nurse droid. Thus, IG-11 wishes to tend to Mando’s injuries, but he again refuses to take off the helmet. However, IG-11 states that he’s a non-living object. Therefore, Mando’s code won’t break, which states that he can’t show his face to a living being. IG-11 takes off Mando’s helmet and cures him while revealing the Mandalorian’s face for the first time in the show. Soon the two join Cara and Karga in the sewers.

While looking for the Mandalorian hideout in the sewers, they come across The Armorer. She was scavenging the equipment of the Mandalorian’s who abandoned that place. Further, she notifies Din that “The Child” might be part of Jedi, who are an ancient nemesis of the Mandalorians. However, she further tells Mando that he got two options whether return the child to his people or raise him. She also names him the father of “the Child” until he’s of the age and makes them a clan of two. Further, the Armorer carves a signet on Mando and also gifts him a jet pack.

The crew then prepares to escape the planet. Mando offers the Armorer to escape with them, but she refuses and wishes to stay behind. Mando and his crew were escaping in a boat through a lava stream in the sewer. But soon, they notice that stormtroopers are waiting for them outside the sewers. Thus, IG-11 sacrifices himself to clear the way for Mando and the group to escape. But Gideon attacks them with a TIE fighter. The Mandalorian using his jetpacks, plant a bomb on the fighter of Gideon, resulting in the fighter crashing.

After the defeat of Gideon, the dominance of the Imperial forces was near to none on Navarro. Thus, Karga wishes to stay behind on that planet, and Cara also joins him as his enforcer. He further offers Mando to join the Group, but he refuses. As he got to look after “the Child”. Mando gives a proper burial to Kuill and leaves the planet. Also, in The Mandalorian: Chapter 8 ending scene, Gideon was alive and cuts out of the crashed TIE fighter with his darksaber.

Also Read: Star Wars: How Old Is Yoda? From The Time He Died & More From The Mandalorian

Henry Ruggs’ Girlfriend: Who Is The NFL Player Dating?

Stephen Sondheim Net Worth: How Much was the Late American Composer Worth?