After witnessing his stepmother's betrayal, his father's casting out, and brothers' ignorance, Lee Bang Won is more determined to turn the course of history! 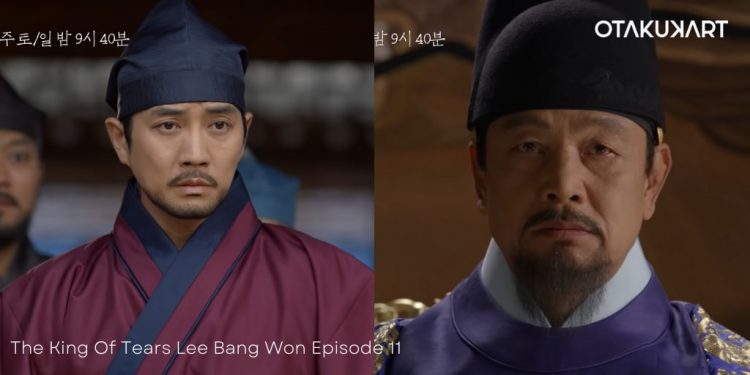 The King Of Tears, Lee Bang Won Episode 11 will show Lee Bang Won’s new resolution to fight against his father! The latest episode has excellently displayed the misery he has been through that made him the ruthless King Taejong. History shows his cruel, evil acts to become the king but, the kdrama narrates his inner battle and suffering, which leads him to the upcoming carnage. Furthermore, the episode shows a glimpse of his personal hell. Lee Bang Won tastes the bitterness of his stepmother’s betrayal, father’s abandonment, brothers’ ignorance, and loss of his child.

The latest episode reveals King Taejo announcing Lady Kang as his Queen and his youngest son as the Crown Prince. After hearing the news, Lee Bang Won tries to convince his brothers, who have already thrown the swords and accepted their fate. To change his father’s decision, he even meets Sambong only to meet the dead end. Everyone has turned their back to him. Also, he finally learns that it is all his stepmother, Queen Kang’s, scheme to eliminate him and his brothers and put his own son on the throne. Misfortune doesn’t end here! While his family celebrates their victory, Lee Bang Won losses his third son!

Now that everything has fallen apart, Lee Bang Won is ready to tear the remaining shell to build a new path leading to his self-written destiny. Therefore, The King Of Tears. Lee Bang Won Episode 11 will reveal a new chapter of this political tale with a new determination!

What To Expect In Episode 11?

The preview of The King Of Tears, Lee Bang Won Episode 11 shows a new side of Lee Bang Won. The upcoming episodes will be narrating a new chapter of this great political thriller saga! The ending of the latest episode reveals that Queen Sindeok Kang visits Lee Bang Won’s house. The preview answers the reason for her visit. It shows that finally, King Taejo forgives his oldest sons, and Queen Kang comes to deliver that message. From an outer viewpoint, it may look like Queen has a close relationship with her stepchildren, and she didn’t abandon them after earning the title. However, the reality is entirely opposite!

With his newfound determination, Lee Bang Won will plan his revenge! Therefore, he will try to gather his men who will stay by his side till the end. For that purpose, he approaches Jo Young Moo, one of the trusted comrades of King Taejo. Another twist the preview shows is about the eldest brother Lee Bang Woo’s story. His side of the story will fuel Lee Bang Won’s anger. According to Lee Bang Woo, their mother told him never to come to Gaegyeong. If he had returned to Gaegyeong, he would have become the crown prince. It seems there is no end to Queen Kang’s wicked games! Hence, it will be exciting to learn what more tricks Queen Kang has in her sleeves! Therefore, The King Of Tears, Lee Bang Won Episode 11 will show Lee Bang Won declaring undeclared war against his father!

The drama is airing on the KBS1 channel at 9:40 pm KST for South Korean viewers. After broadcasting, it will be available on Wavve, an online streaming channel accessible only in South Korea. As for the other nations, the drama will be out on the same day at 6:10 pm in India, 11:40 pm in Australia, 12:40 pm in the UK, and 7:40 am in the USA. As for global viewers, The King Of Tears, Lee Bang Won kdrama is streaming on Rakuten Viki and Kocowa (Only accessible in North and South America) with English Subtitles.