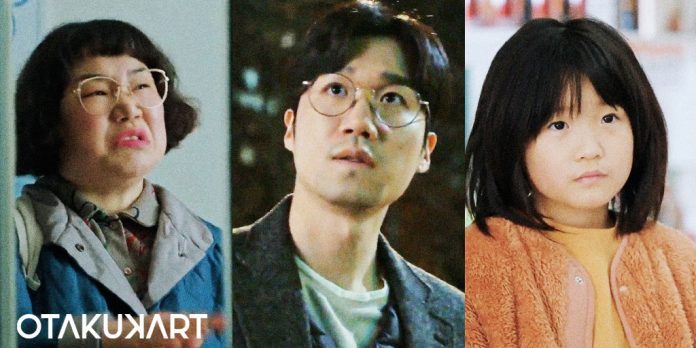 The release of The Killer’s Shopping List Episode 7 is being highly anticipated as the corpses are dropping like flies in the Nawoo Dong neighborhood, and there are only two episodes remaining to find out who the culprit really is. This time, it was Chairwoman Yang Soon who was attacked, her eyes and mouth being glued shut with a glue gun and thrown off the building where Oh Cheon Won coincidentally lives in. And what’s more, Dae Sung was in around the apartment when the body dropped off several floors.

Dae Sung is called on to the police station due to Oh Cheon Won falsely telling the police that he’s an eye-witness to Dae Sung torturing the chairwoman, but is eventually let go off due to flimsy pieces of evidence. But Dae Sung is after the Aunt who takes care of products in MS Mart, aka Products Aunt. Cue a cat and mouse chase between the two, with Products Aunt being wholly unaware that she was even a part of one! Furthermore, we also find out about the disturbing family dynamics of Yul’s parents. Let us brief you on the release date of Ep 7 of The Killer’s Shopping List, as well as what to expect from the episode.

It was Products Aunt who reported Chairwoman Yang Soon’s body to the police. When she finds out that she is still alive but in a coma, she takes a pine-scented drain cleaner to the hospital she is at. After persuading the officers guarding the room she is staying at, she finally gets access to the room. She makes the Chairwoman smell the pine scent of the drain killer and tries yet fails to get some answers. It’s worthwhile to remind the viewers that Products Aunty went to Yul’s house and saw the numerous bottles of drain cleaner that her father had hoarded.

Then she spots Dae Sung following her. Not thinking too much of it, she heads to the hospital reception to get some information about a Vietnamese woman who is supposed to be a patient, but of course, fails to get it because of privacy reasons. Thankfully, her friend works as a helper there, and she tells her that the Vietnamese woman doesn’t appear in the hospital anymore and also that she was regularly beaten up all the time by someone. Turns out that the Vietnamese woman is none other than Yul’s mother, and Products Aunt is not at all surprised at the news of her getting beat because it’s common for foreign women who wed Koreans to get assaulted all the time.

The Killer’s Shopping List Episode 7 will be released on 18th May 2022 (Wednesday) at 10:30 PM KST. For other regions, that is 7 PM IST, 11:30 PM AEST, and 8:30 AM EST. At the end of this week’s episode, Dae Sung finds Yul waiting for her father to take her home outside his real estate office. Yul asks him how he got out of prison, and upon knowing that he wasn’t arrested, she says that she is well aware that Dae Sung is not a criminal. Dae Sung finds her strong conviction weird and asks her if she saw anyone doing anything sketchy that day. When he goes to hold her hold, Yul recoils in pain again. Dae Sung then sees the wounds all over her arms. Dae Sung wants Yul to tell him if her dad caused all the scars, but she sees her dad coming and runs away into his arms. Cheon Kyu then demands to know why Dae Sung is bothering his daughter.

In the preview for Episode 7 of The Killer’s Shopping List, the final stretch for finding the criminal of the neighborhood killings begins. First, we see Meat being in disbelief and asking whether Products Aunt really killed someone. Do Ah Hee finds a CCTV in a lane, which we are sure would lead to new avenues in the investigation. Dae Sung tells everyone in MS Mart that he really thinks that Products Aunt is not the killer, while Part-time takes photos from a planner. We also see Dae Sung tailing Products Aunty again.

Dae Sung thinks it’s time to start over with a fresh perspective on the investigation and asks Do Ah Hee why they started to suspect the workers of MS Mart in the first place, and Ah Hee replies that it’s because all the weapons of murders seemed to have been bought from the mart itself. Policeman Kim Doo Hyun ponders if the person he and Do Ah Hee are talking about is really the killer. Wouldn’t it be best to stay at home knowing that he didn’t do anything else? Lastly, we see Yul silently shedding tears in the dark and remembering that Dae Sung told her to call him if anything bothers or saddens her