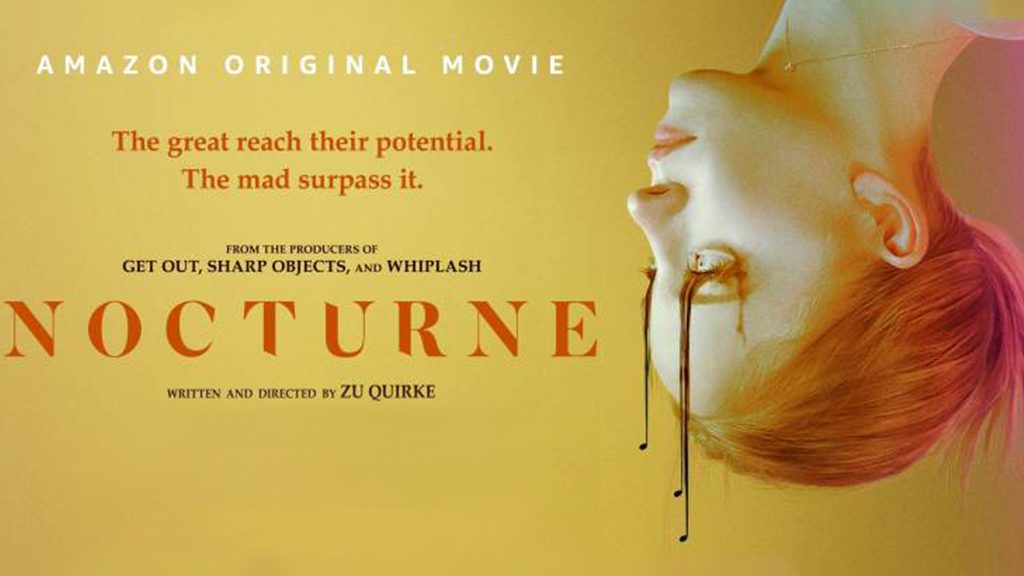 We will take a dip into the ocean of horror to get the Nocturne ending and plot explained. Horror movies always had a vast fanbase and people love to enjoy a good and scary story to enjoy, especially at night. Zu Quirke directs the 2020 horror movie, Nocturne, and is also his first full-length feature film project. The movie has gained quite an attention since it came out on Amazon Prime Videos. If you haven’t watched the movie, then you should first watch it. Because this article will contain a lot of spoilers, which can ruin the experience of enjoying this horror story.

The story revolves around the Lowe sisters studying at a prestigious music school. However, one sister is a prodigy, which overshadows the other sister. This leads her to develop an inferiority complex of the genius sister. However, their life changes after a student at their commit suicides. And soon enough, mysterious and sinister events happen with the sisters. The movie has a unique twist to it because it’s up to the audience whether they want to think the movie is a supernatural horror with paranormal activities the reason behind the ominous events. However, they can also interpret the plot as a psychological horror, where mental illness causes events. But don’t worry because we will go through the plot and will share our perspective about the Nocturne ending and plot.

What is the Nocturne plot?

The story is about the Lowe sisters, Juliet and Vivian. Both of them attend a prestigious music school. However, Vivian is a musical prodigy and already got enrolled in a private music school for further studies. Meanwhile, Juliet takes a year gap as she cannot match his talented sister’s achievements. Soon the news breaks out that a student named Moira committed suicide, who is none other than the girl we saw in the first scene. Because of her death, there is a vacant spot in the school’s showcase. Therefore, an audition will fill that void, and both the sisters are taking part. One day, Juliet comes across Moira’s notebook, which comprises music theories and some creepy satanic sketches. Further, she plays a piece from it. But then Dr. Cask, who is Vivan’s mentor, comes there and tells the piece is Giuseppe Tartini’s The Devil’s Trill. 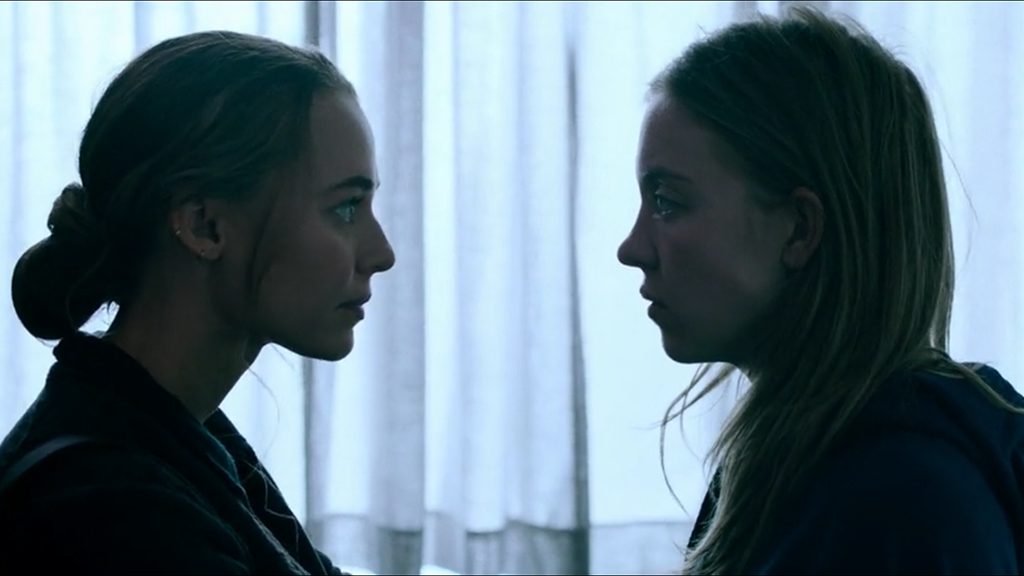 On the audition day, Juliet collapses while auditioning and gets to know when she wakes up. However, Juliet breaks down because of her sister passing the audition. Juliet also takes pills to cope up with her anxiety. She accuses her teacher of not passing the audition, which infuriates him. He also slaps Juliet, which gets him suspended. Even Dr. Cask says both of the sisters are equal in technique, but she can’t rival Vivian’s passion. One day at a secret party, Vivian gets angry at seeing Juliet and Max together and starts a fight with him. Seeing them fight, Juliet runs from there and Vivian also runs after her. Suddenly Juliet stops after seeing a blinding light. But Vivian can’t see those lights and falls off a cliff. She injures her hand from the fall and it can harm her music career. Further, Juliet gets Vivian’s place in the show.

Meanwhile, we also see that Juliet is getting fascinated with the notebook and sees the satanic sketches moving in the notebook. Further, they are kinda similar to the events happening with Juliet. She shares these events with Max and also informs about Vivian cheating on him, resulting in their break-up. Also leading to Juliet having some intimate moments with Max. On the Lane Sisters’ birthday dinner, Vivian throws the cake at Dr. Cask and dashes off from there. These actions lead to Dr. Cask taking Juliet to his home, where she kisses him, but he rejects her advances. It infuriates Juliet, and she reveals knowing about her sister’s affair with him. She further throws his prestigious award into the fire. 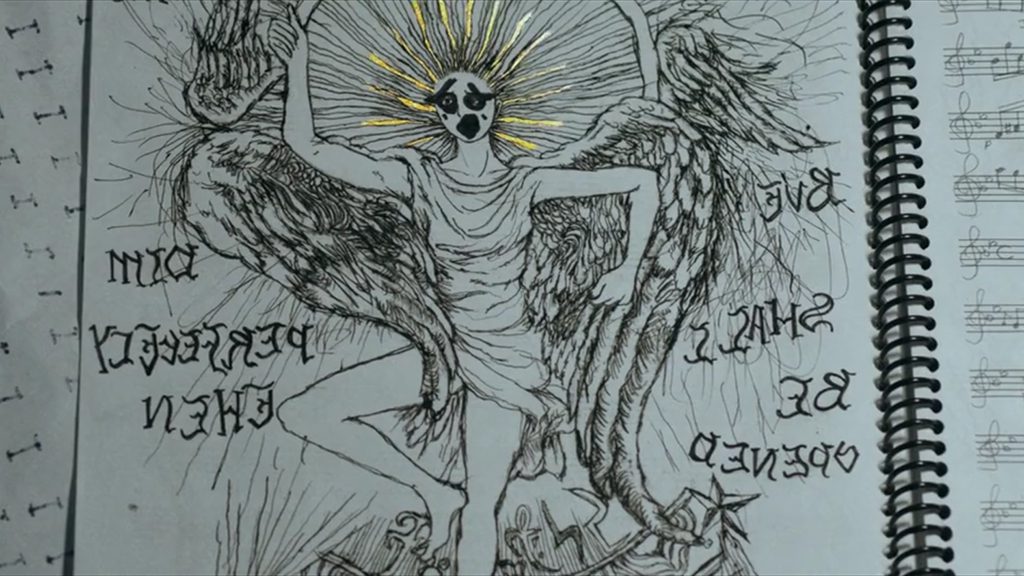 The Satanic sketches in Moira’s notebook.

Reaching home, Juliet finds similarities between the satanic sketches and all the events recently happening with her. But the last page of the notebook was missing which makes her anxious. Suddenly, Juliet goes into a trance and draws something. When she comes back to her senses, the sketch reveals the next step is a sacrifice. Reading about the sacrifice scares Juliet and she burns the notebook. On the show day, Vivan confronts Juliet about her never being able to match her skills.  Soon Juliet suffers a panic attack and she goes to the terrace. Suddenly, she hallucinates performing in an auditorium. Further, she is receiving praises from the audience and her sister. But in reality, she falls off the terrace and died with a very creepy smile on her face. Nobody is even noticing her dead body while walking past her.

What does the Nocturne ending and plot explain?

Many theories suggest that some paranormal activities are behind these sinister events. However, we saw no presence of any satanic entity in the movie. However, we already knew that Juliet was suffering from anxiety and an inferiority complex. These facts lead to her being mentally sick. Whereas, the connection between the notebook and the events in Juliet’s life can be just a coincidence. Further, those moving sketches and those bright lights were actually in Juliet’s mind and nothing in real.

Now you might wonder if Juliet’s were because of her mental sickness, then the events that happened with Moira and her satanic sketches and illustrations on the wall. We can say that Moira also didn’t have a pleasant life as her mother went into a coma and her father killing himself. These could have caused mental stress on Moira and we also get the information that she was an introvert. Because of not having anyone to talk to, she must have committed suicide because of depression. Those satanic sketches can be something she was interested in, as there are many artists who make dark and satanic sketches to represent the depression and loneliness in them. 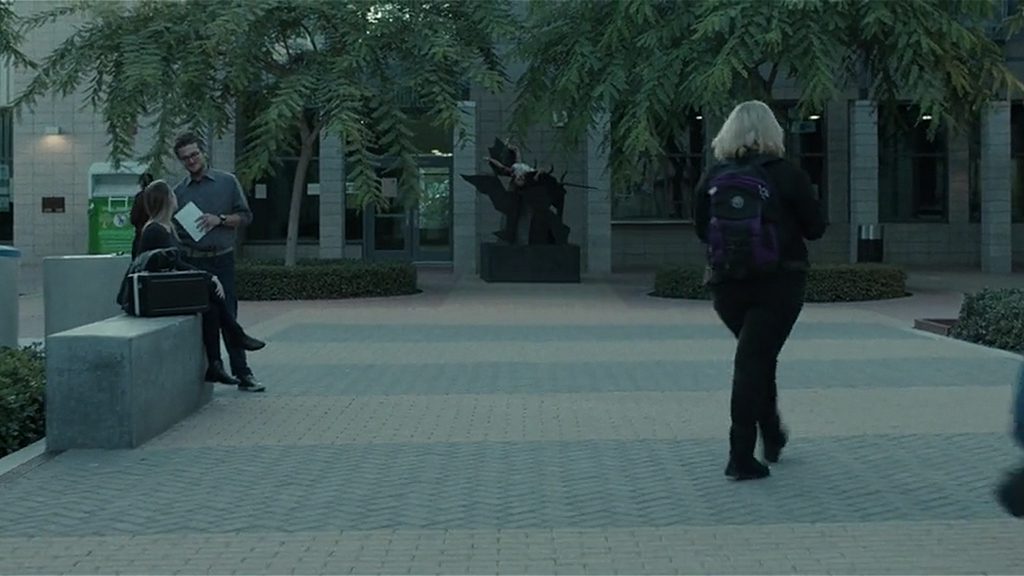 Juliet was also similar to Moira, who also gave her life to music but never received the love or praises as her sister did. The connection between them and Moira’s ghost. All were actually Juliet unintentionally comparing her life to Moira and seeing all those visions. Whereas in the last scene where we see nobody noticing her dead body can be a metaphor. We agree she died, and she was smiling because of her being satisfied because of the hallucination she had prior to death. And nobody noticing her signifies that nobody will notice her, even if she throws her style because of her jealousy and inferiority to Vivian. We can say Zu Quirke used horror and satanic elements to portray mental health.