Noir has come back from the Dungeon after defeating Bronze Bees. He saved Dory and help Lola win her completion. In the morning, he met with Emma and gave her the Wind Selection. He told Emma that he got it from the Dungeon Emma ate it. The Hidden Dungeon Only I Can Enter is left with only two episodes to conclude the episode finale. Emma has found new skills after eating Wind Selection.

She shows Noir how fast her speed has increased. Emma also showed Noir the wins Slash that she has acquired. Noir was impressed by Emma’s skills. She told Noir about the party that the nobles are going to host tonight. Noir comments that the party is for the nobles. Emma asks Noir to come with him, but Noir hesitates to answers. He is scared that he is a low-class boy. Let’s see how Noir will respond below.

The Hidden Dungeon Only I Can Enter Episode 10 Release Date

The Hidden Dungeon Only I Can Enter Episode 10 will release on Saturday, 13 March 2021, at 2:25 AM on Crunchyroll or ANIPLUS. Let’s take a look at the recap, preview, and other updates below.

Previously on The Hidden Dungeon, Only I Can Enter Episode 9

Emma continues to convince Noir to attend the part. She told him that he doesn’t care even if he is taken away by another boy. Emma runs away before Noir answers her, and he heads home. When Noir reaches home, he finds that his father has failed to get a piece of land. Noir realizes that the Startdia family from the Baronet category that the last group. He consoles his father that they will get a chance next year and open a shop.

Noira asks his father if he has an old costume that he can use. His father asks him why and he replies that he is going to the nobles’ party. Noir’s father gave him his old suit, but it has a stain of alcohol, and it smells. He told him that he wears a suit when going to the party with his mom. Noir cleaned it and headed to the party. 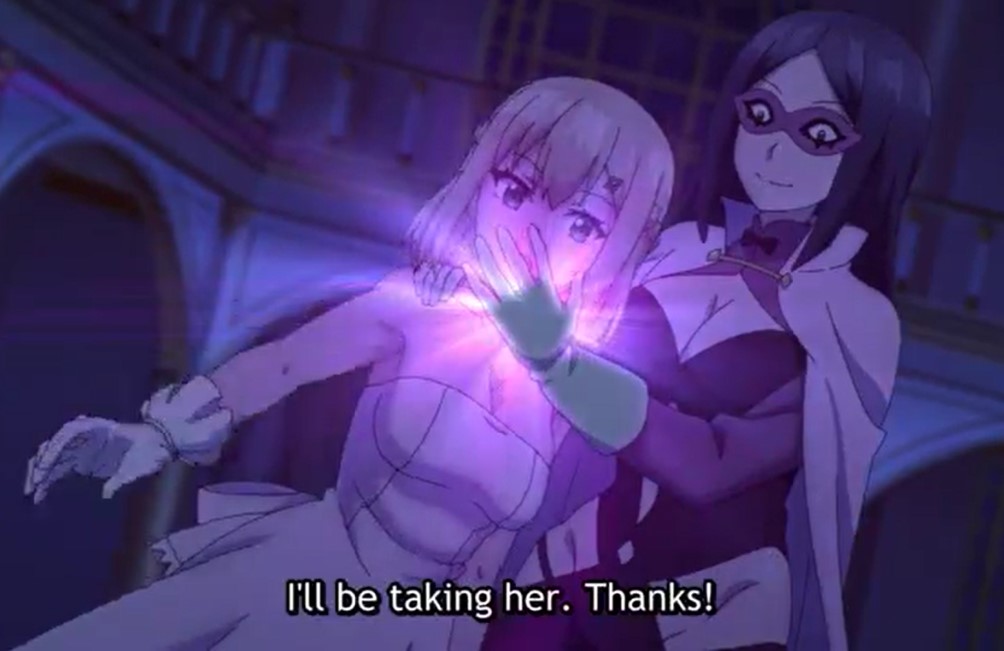 In the evening, the party started at the mansion, and Noir arrives. He was looking for Emma, but he couldn’t find her. Noir met with  Lord Ladana and Lady Romy that were glad to see him. Lord Ladan comments that Noir has grown up to such a fine man. He remembers the little boy wetting his pants like it was yesterday. Noirs said they could leave that part since it is the day of the party. He asks where Emma is.

Lady Ramy replies that Emma is getting dressed and girls have a lot to do. Ladan asks Noir if Emma has told him about today. Noir asks if Ladan is referring to dancing with Emma. Ladan comments that it means Emma has not told him. Emma arrives and apologizes for making Noir wait. She asks Noir if she is looking weird, and he said not at all. The nobles started addressing the party and said he has something to tell them.

He reveals that a few days ago, he received a proclamation. The sender was none other than the Phantom Theif Phantom. Noir realizes that everyone has been talking about it lately. Noir notice that Emma is trembling, and he wonders why. The noble reveals that the thief wishes to steal his mermaid’s tear, but it won’t happen. He also said that adventure from this kingdom’s great guild, Lahmu, is guarding it.

The noble continues to say that the mermaid tear is saved, and Phantom will never find the jewel. It is secured safely; the nobles are glad that they are safe. He told everyone to enjoy the party. Noir asks Emma if Phantom has threatened her, and Emma hides the truth. She told Noir about dancing, and they waited for their turn since they will dance last. Mike from the House of Kental arrives, and he asks Emma about the proposal. Mike told her that she is beautiful. Emma told Mike that her answer wouldn’t change. Mike asks Emma if someone has stolen her heart. Emma kept quiet, and Mike asks Noir who is he. Noir said he had been friends with Emma since they were little. He reveals that he belongs to the Baronet family.

Mike dance with Emma and the nobles clap for him. Noir won the challenge, and he was about to kiss Emma, but the lights went off.  The Phantom thief arrives. Noir defeated the Phantom thief using a lightning strike and save Emma. He won Emma’s heart, and she now belongs to him.

The Hidden Dungeon Only I Can Enter Episode 10 Preview

Read The Hidden Dungeon Only I Can Enter Episode 9.

In this article:The Hidden Dungeon Only I Can Enter