The Hero Party Learns The Mystery Behind Cave of Trials In Dragon Quest: The Adventure of Dai Episode 63 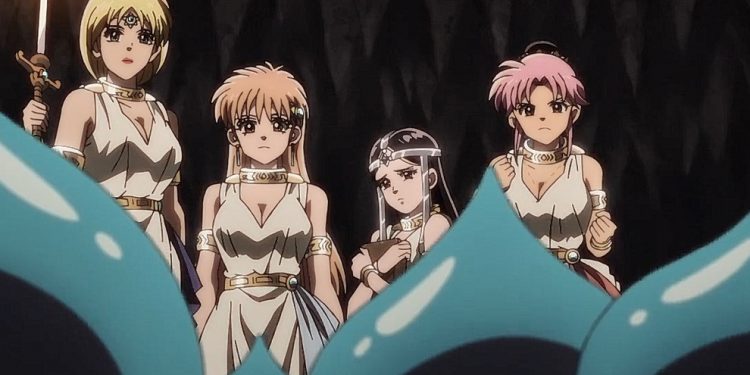 Dragon-Quest: The Adventure of Dai Episode 63

Dragon Quest: The Adventure of Dai Episode 63 reveals the mystery behind the Cave of Trials. Dai and the Hero Party have learned that God of Humans created the Cave of Trials. Inside the Cave of Trials, all types of magic counter evil power. Queen Flora built the fort knowing that they would need to use it one day. Dai is surprised since there are monsters in a cave of a God and asks the knights. In the recent episode of  Dragon Quest: The Adventure of Dai, the knight reveals that the Ancient Tome that King Teran sent for them, the gods forbid humans having more power than they deserve.

But the Labyrinth extends underground with deep levels that hold spells of great power and many traps. The knight also reveals that the Cave of Trials is not for inexperienced people. Maam talked about obtaining Kaglimmer, and Popp is impressed that the Carl Kingdom had such a place. Popp read the book and reveals the mystery behind Kaglimmer that increases power by casting it in a group. He realizes that Avan once cast that spell, and the Diciples succeed with that. The knight knows that only Avan’s Diciples can make it. Dai is worried about Leon and tells them that he is against it.

He knows that the Cave of Trials is too dangerous for Leona, and they might be putting Papoanica’s princess in danger. One of the women’s knights told Dai not to insult the princess since women can risk their lives and fight for what they believe in. Maam told Amy that Dai was trying to protect Leona. She also talked about Leona becoming Avan’s Disciple, and Leona will face the Dark King Vearn.

Previously on Dragon Quest: The Adventure of Dai Episode 62

Popp realizes that King Vearn is tough, and they don’t want to face him now since they are not strong enough to defeat him. Amy convinces Dai to let Leona enter the Cave of Trials. Maam supports Amy and reminds Dai that a girl is fighting against Dark King. Princess Leona and Queen Flora arrive, ready to enter the Cave of Trials. Flora told the Heroes that they needed a few guards to accompany them; Leona asked the Hero of North Nova to help them with something. Leona, Flora, Maam, and others arrive inside the Cave of Trials.

Popp had a flashback when Avan talks with him before he died in the hands of Hadlar. He wonders why his Insignias is not shining and thinks that they received it before completing training. Popp is worried since Maam and Hyunckel’s Insignias are shining and wonders if the two were appropriately accepted. Popp thinks that he might be unworthy of being a Disciple of Avan. But he refuses to accept that since he has sacrificed so much to reach this point. He decided to train until he made the Insignia glow.

Dragon Quest: The Adventure of Dai Episode 63 will be released on 25 December 2021. But they will do it in 20 hours, and ten hours will be for getting Hyunckel and Crocodine back. Inside the cave, they encounter slimes, and Maam thinks they can beat them since they are weak. Flora realizes they don’t waste time and use a whip to send the slimes away. Maam asks about the spells that they have to learn in each level to pass them without wasting time. Let’s look at Dragon Quest: The Adventure of Dai Episode 63 official details.

Nova decided to base Dai’s training on the Book of Avan and read all the spells that Dai needed to learn. They continue with the training, and Dai tries all the spells one by one. The girls inside the Cave of Trials have reached level 18 and spent ten hours. Let’s meet when Dragon Quest: The Adventure of Dai Episode 63 is released.

Also Read: Will Oka Close The Gate Between The Nether Realm and Human Realm In Shikizakura Episode 12?.