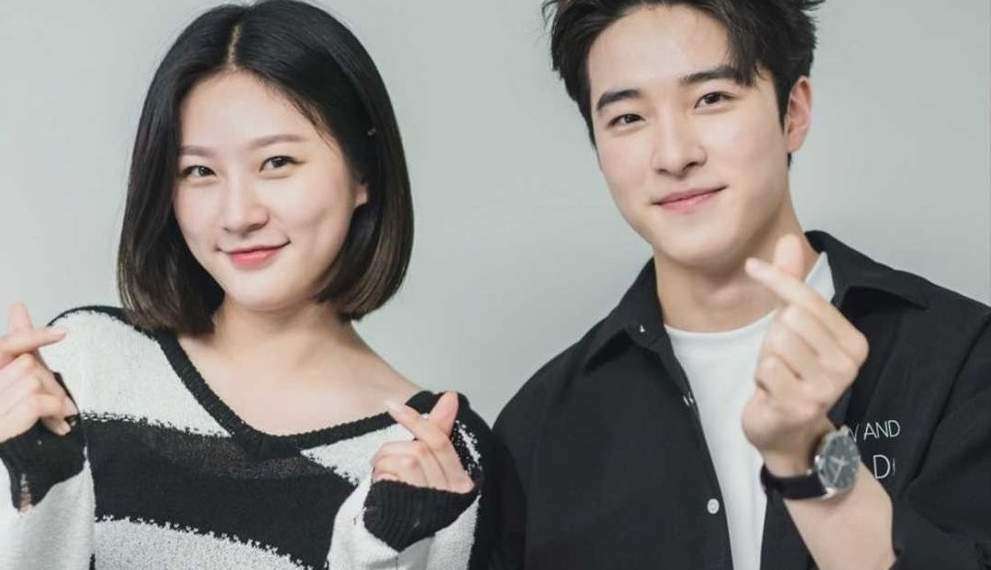 The Great Shaman Ga Doo Shim, the new Kakao Tv drama, has dropped the new main poster for the show. All the further details of the show are also dropped alongside individual character posters and the main one. The upcoming fantasy drama will release next week on Daum Kakao Tv. And the young Kdrama fans are curiously waiting for the drama to air. The mystery fantasy romance will revolve around two unique high schoolers who get involved in mysterious events. Starring Kim Sae Rom and Nam Da Reum in the lead roles, the new stills from the drama gives insight into the plot better. So, make sure to check out the posters further ahead in the article.

Park Ho Jin directs the Great Shaman Go Doo Shim. Meanwhile, Joo Brothers will pen down the script, and  MAYS Entertainment is producing the new mini-series. The show stars Kim Sae Ron as Ga Doo Shim and Nam Da Reum as Na Woo Soo. Both the lead stars have appeared in several Kdramas as child actors. However, now they are all set to lead their own drama. 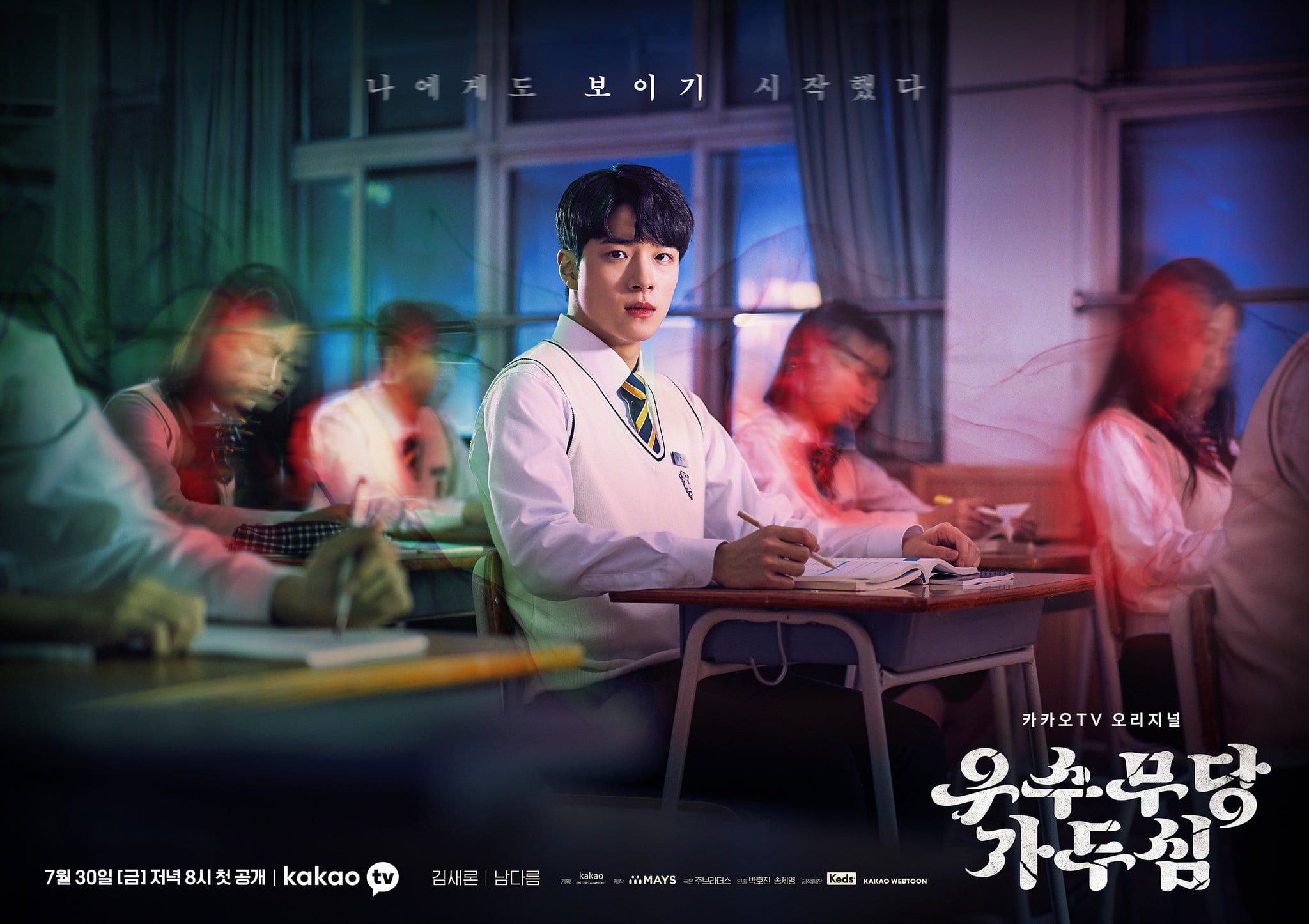 The new posters gave us access to the exciting lives of teenage kids who like to deal with evil spirits. In the shot, we see Ga Doo Shim and Na Woo Soo standing next to each other with an expression of courage on their faces. Ga Doo Shim gazes up as she carries a sharp ax on her shoulder, while Na Woo Soo is looking in the same direction as her. But, his expressions are cold as he tightly grasps the rope. The duo birth an unbeatable aura. And even though they’re high schoolers, they’ll be able to fight against supernatural enemies easily.

Kyung Pil ( Moon Sung Geun), the principal, is stood behind Ga Doo Shim and Na Woo Soo. He has turned their high school into the best high school in Korea. His expression is filled with charisma and pride. Moreover, he stood coldly, and his face radiates a creepy smile as if he is hiding a secret. 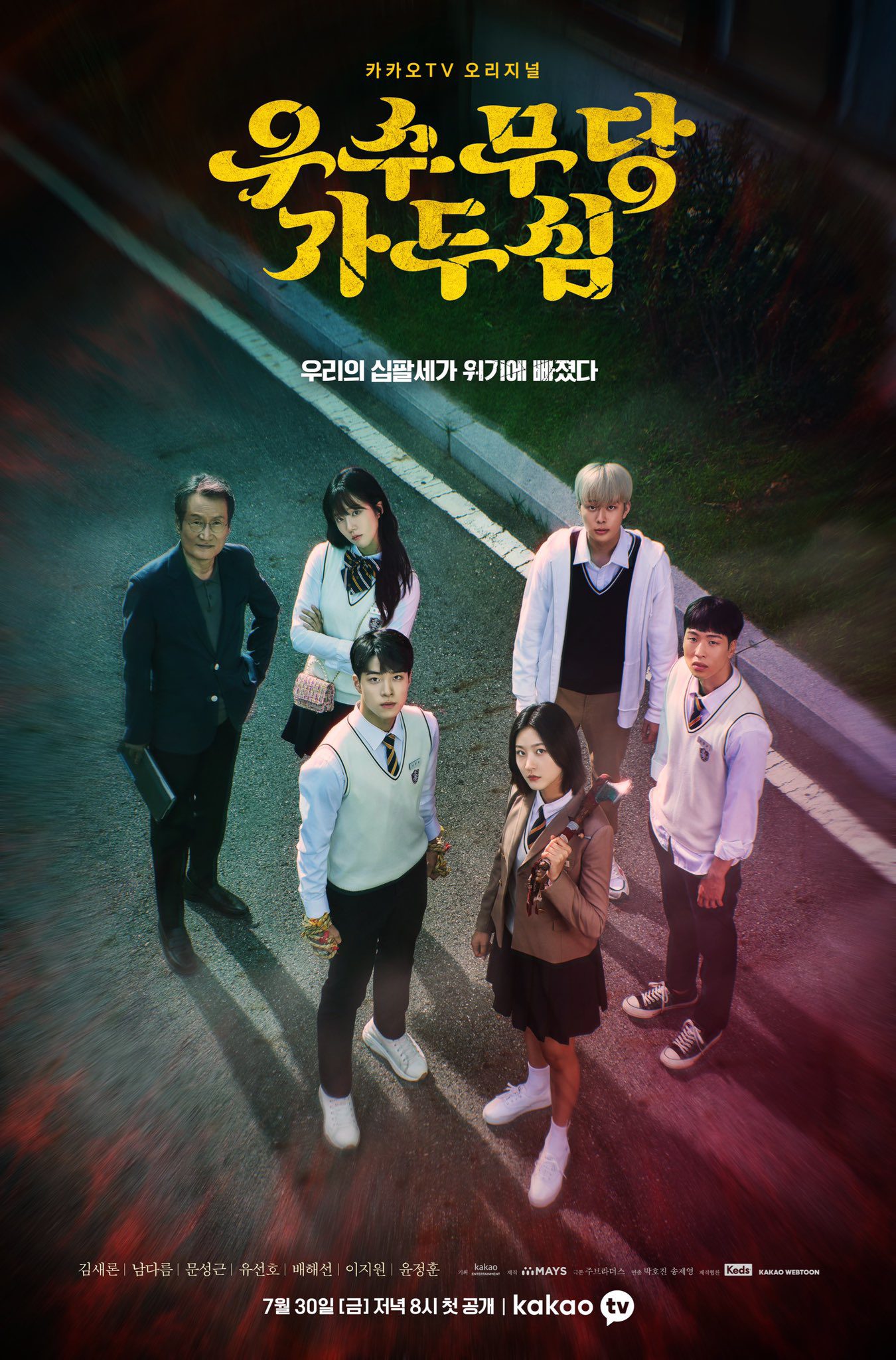 Hyun Soo ( Yoo Seon Ho) is also in the background, and he looks different than others because of his white hair and different school uniform. It makes viewers curious and asks why Hyun Soo can’t leave this world and why he showed up at this high school.

The poster also includes Il Nam ( Yoon Jung Hoon), Na Woo Soo’s best friend. He has the lowest grades in his class. And lastly, there is Soo Jung (Lee Ji Won), who has a crush on Na Woo Soo. Il Nam stares with an angry face at the mysterious figure floating in the air. On the other hand, Soo Jung stands with a cute pink handbag and crossed arms featuring her coy and jealous personality.

The Great Shaman Go Doo Shim is releasing on July 30, 2021. The show will have 12 episodes of 20 minutes each. Moreover, the first two episodes will release on the premiere day, only on Kakao Tv. You will be able to watch the episodes on the Kakao Tv app. So, make sure to mark down the date. No teaser and trailer video is released yet. However, we will update you once it comes. 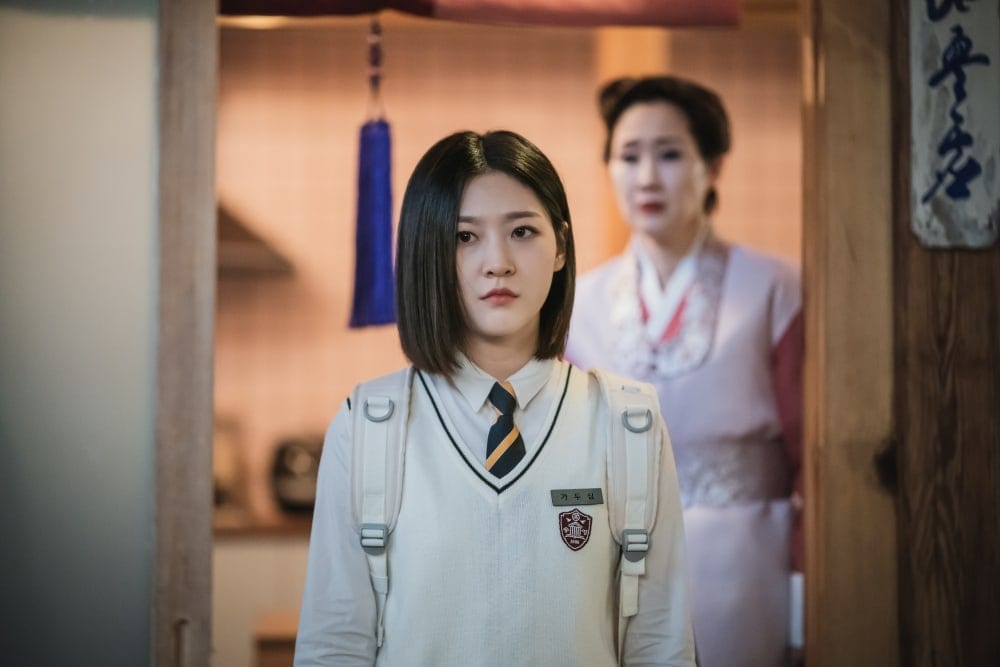 The Great Sham Go Doo Shim previously released individual posters of the female lead, Kim Sae Ron. She is playing the titular role, who can hear and see things other people can’t. After her mother and grandmother, she is the third generation Shaman. But, she does not want to live such a life.

So, how will she avoid her destiny? Watch the show to know more about Go Doo Shim.

In the meantime, watch Kim Sae Ron in Mirror Of the Witch here.