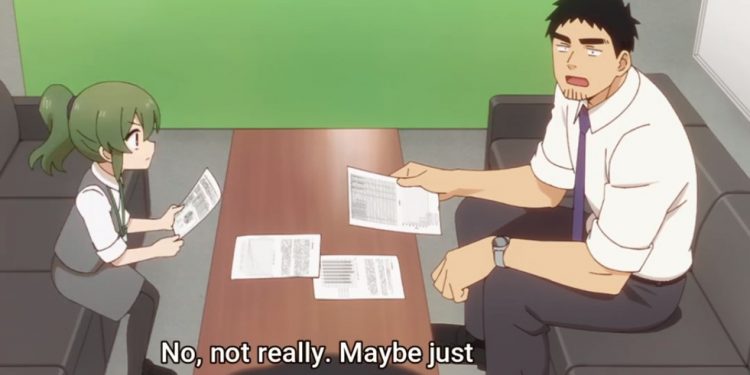 Harumi accepted that and decided to try new things during the Golden Week. Futaba reveals that her Golden Week schedule is fully packed. The Chief is interested in Futaba’s ideas. Souto and other staff members talk about what they will do during the Golden Week. The boys decided that they would start dating and take the girls out, and by the end of the holiday, everyone must have a girlfriend. Souta knows that the boys are just bragging since nothing like that will happen.

His friends wonder what he will do during the Golden Week, and Souta reveals that he will beat the new game. The second guy talked about collecting special rocks, and the third guy thinks that Souta and the others are talking about childish stuff since a real man talks about ladies. He also talked about tying the knot with his dream girl. Souta notices that the lady that talks too much has arrived and heads upstairs. He saw Touko talking with another guy who was thanking her. Souta hides to hear what Touko and the guys are saying.

Previously on My Senpai is Annoying Episode 9

Souta realizes that the guy is trying to win Touko, and he also asks her about taking her to dinner to thank her properly. That guy tells Touko that she is a friend of the owner of the posh restaurant. Touko thinks that is amazing, and Souta gets angry, wondering if she will go out with that guy. Touko tells the guy that she has other plans in the evening. That guy decided to leave and say he would try next time. Souta wonders what Touko has plans with. But he received a message from her telling him to try a Ramen with her in the evening.

Souta realizes that Touka was talking about him and realizes that he did the wrong things by listening to Touko talking with that guy. He feels like he has become a stalker. The Golden Week begins, and Futaba begins to deal with her schedule. She did all the stuff that she promised Haruma that she would do. Futaba read a book that talks about ”how capable women spend their holidays.” She receives some tips and uses them on her while doing all the chores. Futaba decided to become a capable woman during the holiday.

Souta waits for Touko and looks at the time, wondering if he is the one who arrived early. But Touko arrives and apologizes for keeping him standing. Souto was speechless since he couldn’t tell her that she was cute. The two head to the Ramen shop, and Souta realizes that he never wants to lose her to anyone. The guys notice that Touko has a huge chest and says she is a major league. Souta blocks their sight, and they can’t see anything. Futaba watches horror movies, and Harumi joins her.

My Senpai is Annoying Episode 10 will be released on 5 December 2021. Touko and Souta arrive where only a couple is needed, and Touko tells the lady that they are a couple. They receive a ticket to enter the arena. Haruma and Futaba also enter to have fun. Haruma teaches Futaba how to play games, and at the same time, she realizes that she is having the best Golden Week ever. Let’s look at how to watch My Senpai is Annoying Episode 10.

Also Read: The Irregulars Reveals The Mystery Behind Sealing Ship In Chapter 520 of Tower Of God.