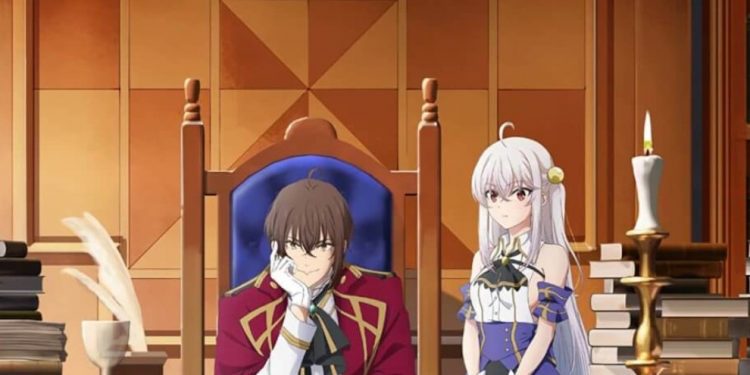 An anime Tv series adaptation was revealed during a Livestream for the “GA Fes 2021” event in January 2021. NBCUniversal Entertainment Japan worked with the production of the series, which Yokohama Animation Laboratory animates. Masato Tamagawa worked as a director, Xin Ya Cai served as assistant director. Deko Akao handles series composition, Ryunosuke Oji designed the characters, and Toshihiko Sahashi composed the music. Nagi Yanagi  with The Sixth Lie performed the opening theme song, “Level.” Yoshino Nanjo performed  the ending theme song “Alone and With You.” The series will air on January 2022 on Tokyo MX, BS NTV, & AT-X.

Funimation worked with the licensing of the series outside of Asia, but in South and Southeast Asia, it was licensed by Muse Communication. The anime will feature characters like Falanya Elk Arbalest, Nanaki Raleigh that fall under the Kingdom of Natra, Lowellmina Earthworld, and Fyshe Blundell under the Earthworld Empire. Gruer and Torcheila fall under the Kingdom of Soljest, Kingdom of Marden: Zeno, Hagar, Lachram, Gardmeria, Bartholoru and Manfred. The new prince took over the kingdom after the previous prince died from the illness.

It began in the north of the continent of Varno in a small mystery kingdom of Natra, where King Owen passed away after suffering from an illness. But Owen’s son took over after his father and ran the country. Crown Prince Regent and Wein Salema Arbalest continue to rule the kingdom. The beautiful aide, Ninym Ralei, helps Crown Prince while Wein shows the image of a genius prince who leads the nation with an iron hand. But behind the scenes, Wein is plotting something and hopes to commit treason by selling off his home country.

He realizes that he will escape the country and his duties once he achieves his goal. Wein Salema Arbalest is the heir to the royal line of Natra’s kingdom, and manny considers him a skilled genius. The people of his country love him. But his tricks end up backfiring since his aide Ninym inflicted pain on him. Falanya Elk Arbalesknow as Furanya Eruku Arubaresuto, is Prince Wein’s young sister. Princess Falanya studies politics believing that she would help Wein when he is not around and fill his boots.

Her wish became true after the Mealtars incident since she helped her brother execute his plans. He outwits his opposing enemies. Prince Wein loves to commit treason. No one can blame him since he has a considerable task to care for the tiny kingdom that he considers pathetic. He has a brilliant idea that benefits himself and always plans on actioning his country, but some thought he could retire since they were tired of his dramas. But sometimes, his plans always backfire and favor the citizens, and he has also faced disastrous consequences.

Tags: The Genius Prince's Guide to Raising a Nation Out of Debt
ShareTweetShareSharePinSend
Previous Post