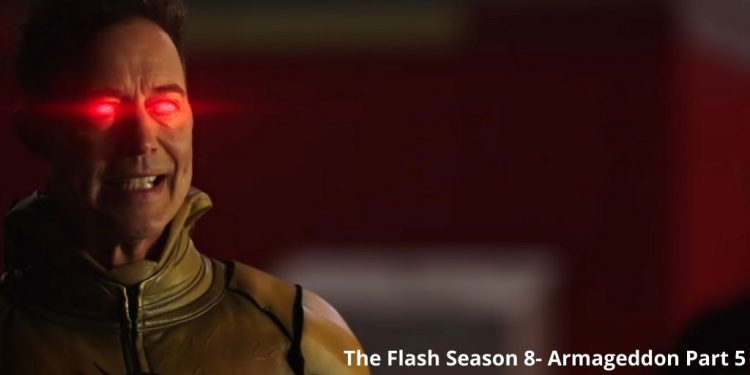 The 5 part crossover event is finally coming to its end on The Flash Season 8 Episode 5. This has got the fans very much excited and eager to find out what happens. The previous episode showed us how Barry traveled to the future only to find out that Eobard Thawn had changed the timeline. Meanwhile, Barry had lost most of his connection to the Speedforce after he asked Black Lightning to take away his speed. Therefore, he wasn’t fast enough to stop Thawn this time. Things got way more interesting when Damien Darhk came into the picture.

However, he was once again that dark and cold murdering villain he used to be in this timeline. Although, it seemed like Barry figured out a way to help him defeat Thawn. But the main question in all of this was, did Flash cause Armageddon in that timeline? The American superhero television series which follows the storyline of the characters from DC comics has been hugely popular since it first kicked off in 2014. Furthermore, the series was a spin-off to another popular DC tv show titled “Arrow” and therefore is a major part of the Arrowverse.

Therefore, the show has had several crossover events each year where we saw characters from other DC tv shows crossing over to The Flash for a particular episode. This year, it’s the 5 part Armageddon event that has got the fans hyped up and now they are eager to watch The Flash Season 8 Episode 5. However, before we discuss that, let’s take a look at the previous episode and find out whether Barry fixed the timeline or not. 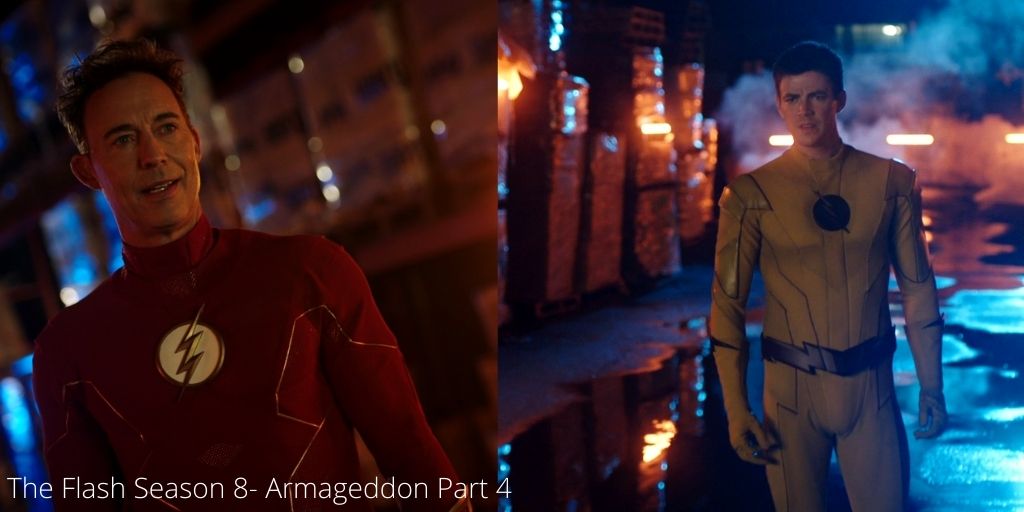 Episode 4 of The Flash Season 8 came out on 7th December 2021. Moreover, the episode was titled “Armageddon, Part 4”. The episode began with Barry arriving at the West Party where Eobard Thawn was giving a speech about his one true love, Iris West. Meanwhile, all of Barry’s friends were present there and seemed to be happy for Iris and Thawn. This was a shocker to Barry and what surprised him, even more, was the fact that everyone thought of him as the villain. Therefore, in order to prove to them that he was the Flash, he decided to suit up. But to his surprise, he suited up as the Reverse-Flash and seemed to be using the negative speed force as well.

Whereas Thawn suited up as the Flash and was using the original speed force. Before Barry could process any of this, all of his friends started attacking him. Batwoman, Alex, and Allegra gave him a tough time whereas Ryan Choi aka The Atom was against him too. However, Barry managed to escape somehow and took Iris with him to their apartment. There he tried to convince her that he was her true love and even called Iris his lightning rod. Although Thawn took Barry away to fight him, Barry’s words stuck with Iris. When Thawn and Barry got alone, Thawn explained to Barry how he changed the timeline by creating a Reverse-Flashpoint Paradox.

Moreover, he took away Barry’s life in doing so and killed the younger Barry as well. That is when Barry learned that he would be completely erased at midnight and the new timeline will solidify. Later on, Barry learned about Damien Darhk and their partnership in this timeline so he went to him and took his help to retrieve a device from Star Labs that would fix it all. But Damien later figured out that Barry was not Reverse-Flash otherwise he would have not hesitated to kill everyone at Star Labs. Therefore Barry came clean to Damien and showed him the past where Damien’s daughter Nora was alive.

After learning that it was Thawn who killed Nora by changing the timeline, Damien decided to help Barry reverse the new timeline before midnight. However, in doing so Barry would be causing Armageddon when he runs around the earth at Mach 20 to open a portal. But they had no other choice so they went ahead with the plan. While Barry started to run, Damien tried to hold off the other heroes from Star Labs. On the other hand, Thawn tried to stop Barry from reversing time but he failed and Barry fixed the timeline. Furthermore, he convinced Despero by telling him the truth about how Thawn messed the timeline that led to Armageddon.

“The Flash Season 8 Episode 5 will release on 14th December 2021 at 8 pm ET on The CW in the United States.” Furthermore, the episode will be titled “Armageddon, Part 5”. The next episode will see the conclusion of the 5 part event, that is, Armageddon. Furthermore, the crossover finale event will see Flash fighting one of his most fierce battles ever against his biggest rival Reverse-Flash. Meanwhile, we will see Mia Queen come back from the future to save someone close to her. The battle of the speedsters might also bring another loss to Barry. So stay tuned and don’t forget to watch the Armageddon finale.

How To Watch The Flash Season 8? Streaming Details

The popular DC tv show featuring one of the most popular DC characters has once again created a big hype with the latest season. Therefore, the viewers are eager to know where to watch The Flash Season 8? The answer to that is a rather simple one. “The Flash Season 8 airs every Tuesday on The CW at 8 pm ET in the United States.” Meanwhile, the fans can stream the show on Youtube TV and Amazon Prime Video. Whereas the viewers in Australia can stream the first 6 seasons on Stan.

Also Read: Shazam! 2: It Will Be Bigger & Better Than The First

Will The Walking Dead: World Beyond Season 2 Episode 11 Happen?