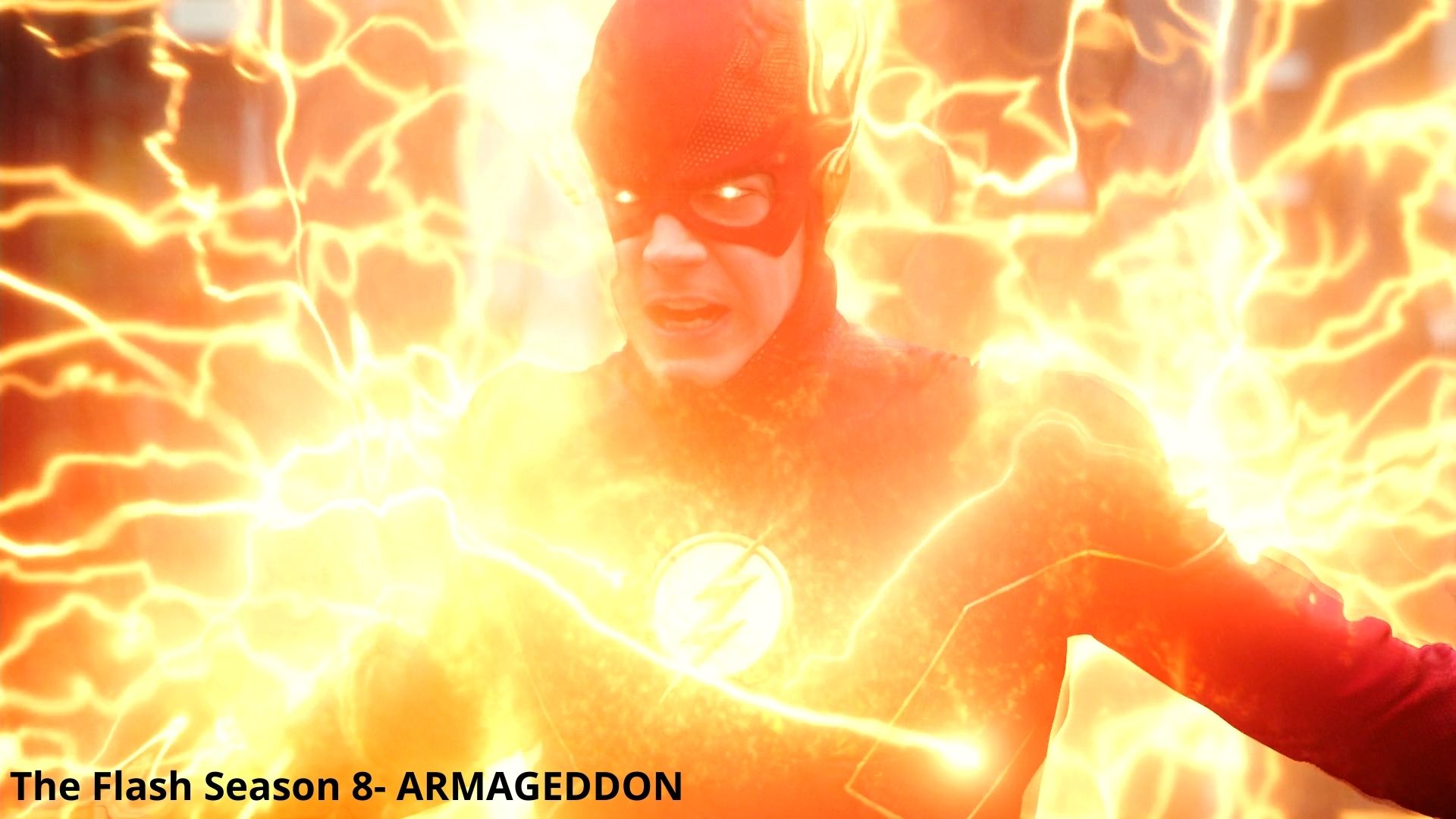 Armageddon Part 2 has arrived, and the fans are eager to watch The Flash Season 8 Episode 3. The next episode will bring us Armageddon Part 3 as the 5 part crossover event on The Flash continues. The previous episode gave us a look at Flash trying to survive the 24 hours, which were crucial for his sanity. Despero had told him that these 24 hours were the ones where Barry would start to lose his sanity as his mind started to crack. Meanwhile, there was another metahuman in the town that was probably responsible for Flash losing control. Or maybe there is something bigger behind it?

The American superhero television series has been airing since it first came out on 7th October 2014. Moreover, the show was a spin-off of the popular tv show “Arrow” that started the Arrowverse in the year 2011. ‘The Flash’ features the iconic DC character Barry Allen, aka the Flash, who is a speedster. Moreover, the show also features a lot of other popular characters from the DC comics. It has gained huge popularity and has been ever-growing since its premiere. Andrew Kreisberg, Geoff Johns, and Greg Berlanti have jointly created the show.

Furthermore, Andrew and Greg are also the executive producers of the show, along with David Nutter, Gabrielle Stanton, Sarah Schechter, Aaron Helbing, and Todd Helbing. The star cast of the show includes Grant Gustin, Candice Patton, Jesse L. Martin, Danielle Panabaker, and more. The eighth season has kicked off with a 5 part crossover event called Armageddon, and we have gone through the first two parts. The fans are now awaiting the release of Armageddon Part 3, which will be The Flash Season 8 Episode 3. However, let us first take a recap of the previous episode, that is, Armageddon Part 2. 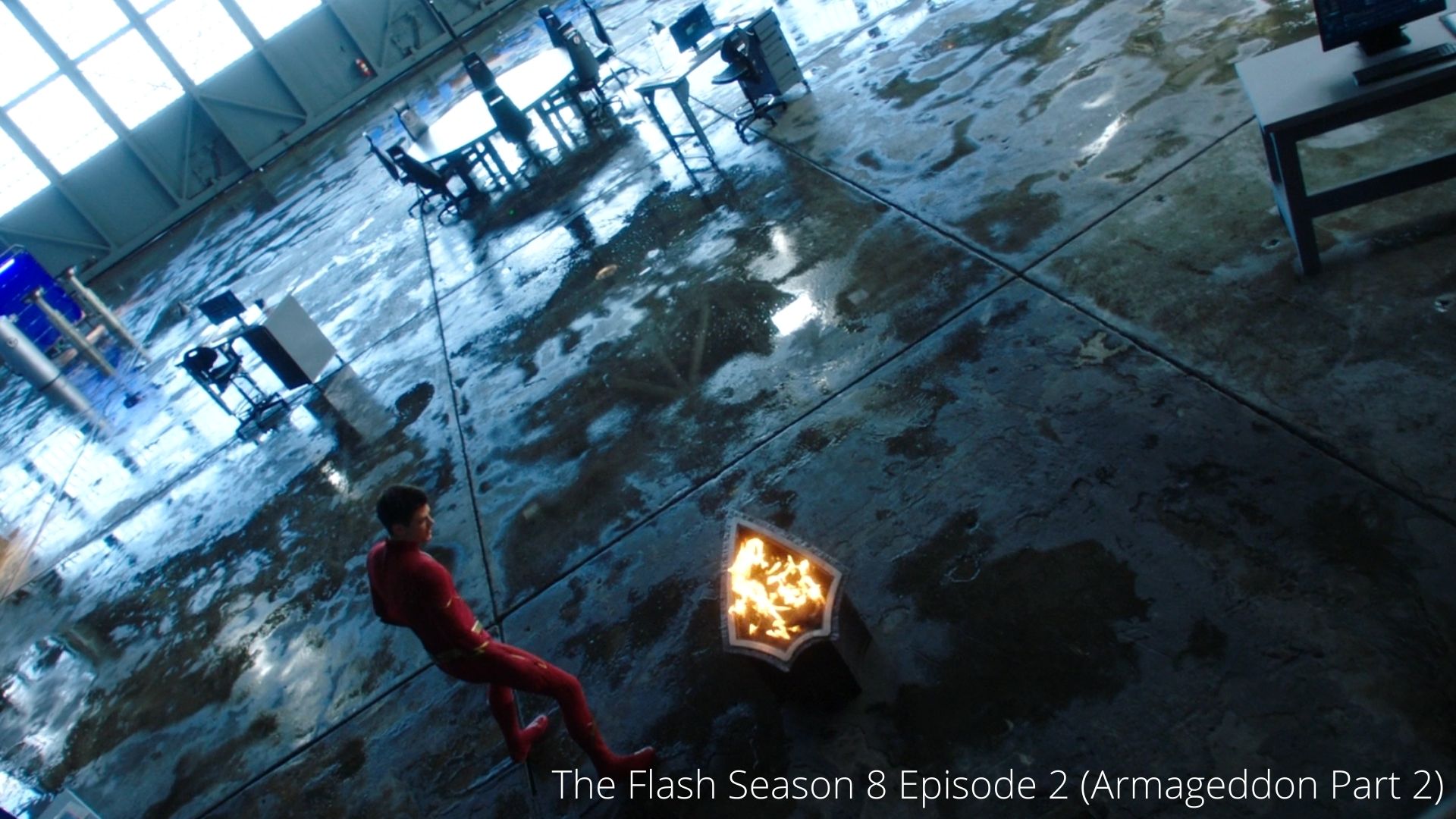 Episode 2 of The Flash Season 8 came out on 23rd November 2021. Furthermore, the episode was titled “Armageddon, Part 2”. The episode begins with Despero telling Barry that the next day will be the day his mind will start to crack. So Barry and Team Flash decided to look out for every small thing and survive the 24 hours and prove Despero wrong. However, it all started to begin when Barry got an alert about a robbery at the bank. Surprisingly no one was hurt or killed, and it was the security manager who went insane out of the blue.

Meanwhile, while Barry was about to go inside and investigate, Captain Kramer got there and asked Barry to surrender his badge. She told him that an old investigation had his name linked to it, and he was a suspect in it. This surprised Barry, and he asked Kramer to trust him, and she did, but she still had to take away his badge and follow the orders. Despero was watching Barry at that moment to see if he snapped, but he didn’t, at least not yet. Later on, Barry stopped by to see the security guard at the bank and heard him constantly whispering the name ‘Xotar’. 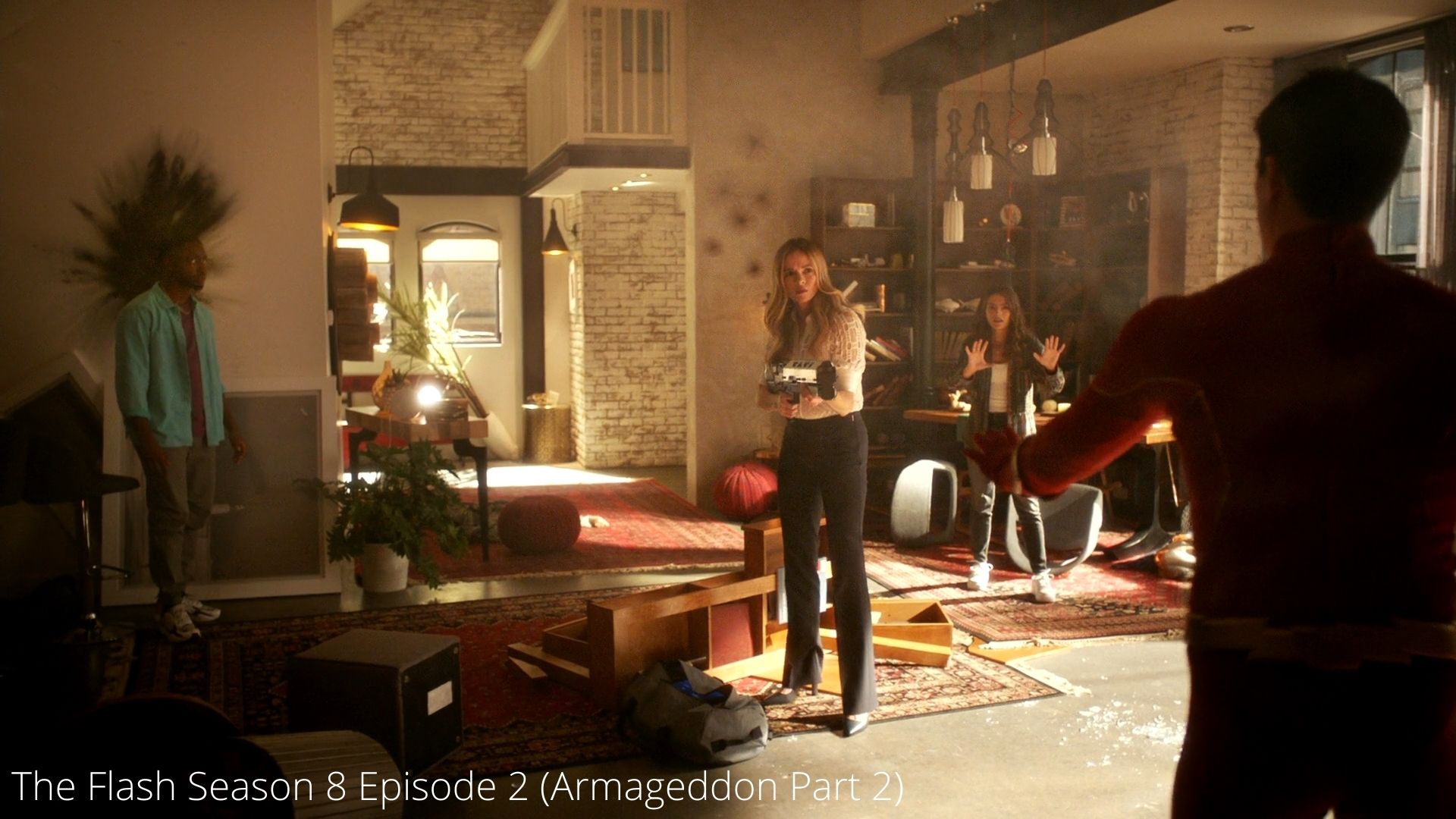 Although, he had to go through another terrible loss when he and his team lost Star Labs after the city department decided to shut it and demolish it as it was emitting radiation. Soon Iris helped Barry find out about Xotar, who is a psychic meta-criminal from National City capable of controlling her victim’s minds and driving them crazy. So Flash ran through the city and found her on her way to another robbery. He ran towards her, but she used her powers, and the next moment he was in his apartment destroying it and almost attacking his friends.

Flash vs Xotar: Why Did Despero Come To Earth?

At the apartment, Caitlin had her speed gun pointed at Flash, and Allegra was ready to blast him off. They all thought he had already gone insane. But Barry couldn’t remember anything that he did there. So they figured it was Xotar who used her powers on Barry to make him do this. Flash once again ran through the city to find her, but instead, he met Despero again. He asked Despero who he was and why he was concerned about Earth if it was not his home.

Despero told Flash his story and how his hesitation in killing the enemy became the death of his planet. So when he was sent to Earth, he made it his home but soon found out that Flash was going to destroy it. So this time, he is ready to kill Flash in order to save Earth. On the other hand, Allegra convinced Chester not to build a weapon for hurting Despero if he didn’t want to. But rather build something to protect Barry. Soon Chester got a hit on Xotar’s location, who was robbing another van. 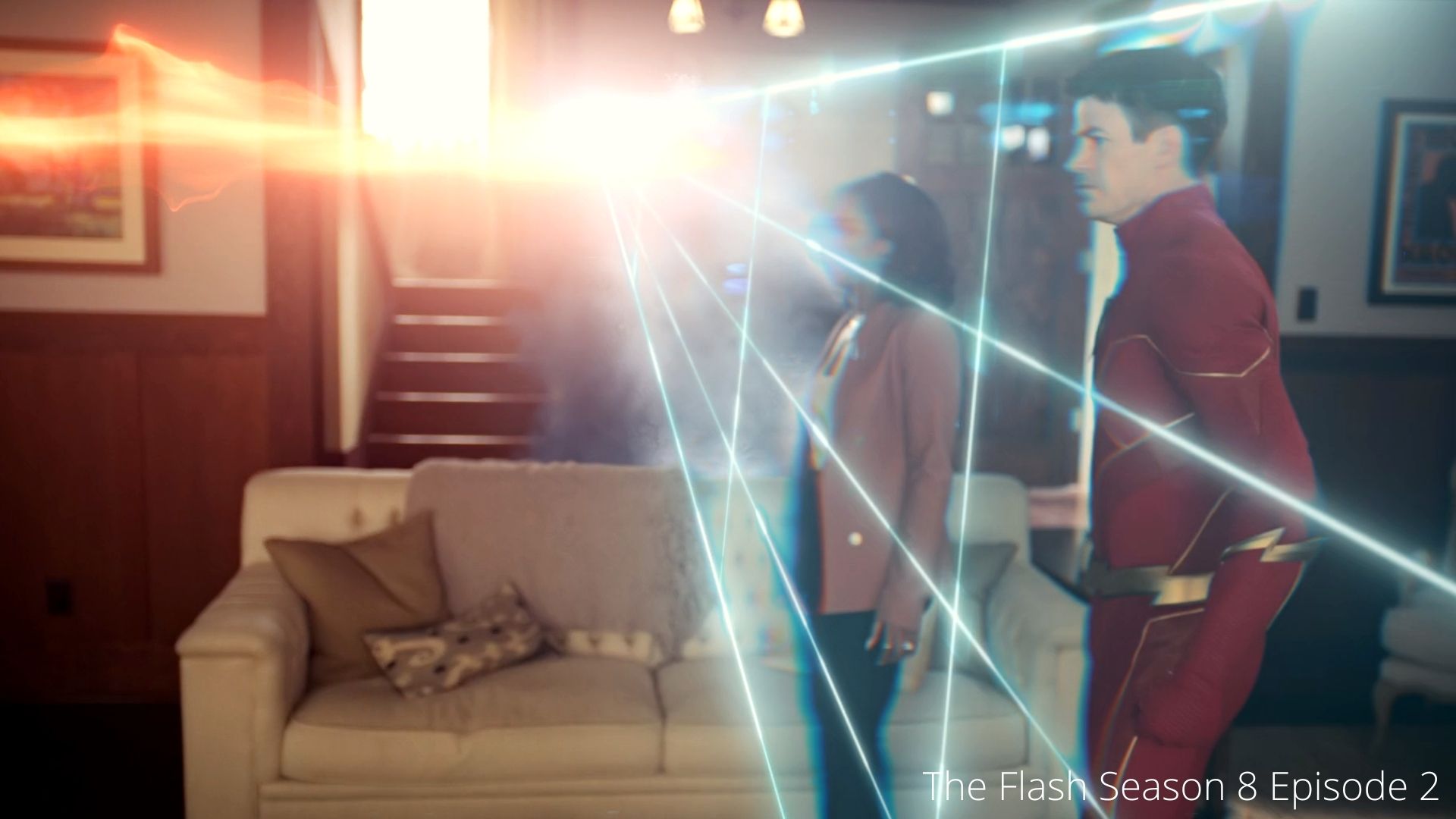 However, Barry got there on time and took the affected people to safety. Then he tried to stop Xotar, but she used her power and lifted Flash in mid-air. She even started to crush his bones using her power. However, Flash started to generate lighting in his body by vibrating his cells. After generating enough lighting, he blasted Xotar with it and then cuffed her. While at Chester’s house, Caitlin told everyone that all the affected people regained their consciousness as soon as Xotar was cuffed with the meta-human power dampeners.

Is Flash Losing His Mind? What Happened To Joe?

As everyone was chatting at Chester’s house, Barry told everyone to meet at Joe’s house and ask him to cook some delicious food. This surprised Caitlin, Chester, and Allegra, who told Barry it was not funny. Barry didn’t understand, so he said more about Joe cooking some burgers. Hearing this, Caitlin told him it was not funny, and Chester asked Barry whether he remembered Joe was not alive. Caitlin also asked Barry whether he remembers that Joe died six months back. Hearing all of this, Barry couldn’t believe them and ran to Joe’s house looking for Joe.

Seeing Barry run inside the house, Iris got scared and asked if he was alright. Barry was panicking and asked her where is Joe to which she pointed out Joe’s photo telling him that he had died. She even told Barry that it was he who gave a eulogy at Joe’s funeral. But Barry wasn’t ready to believe this as he didn’t seem to remember it. Cecile also lashed out at Barry for not letting her move on and saying that Joe is alive. Soon, Iris received news and switched on the tv. Flash was all over the news for destroying city hall and attacking the citizens. 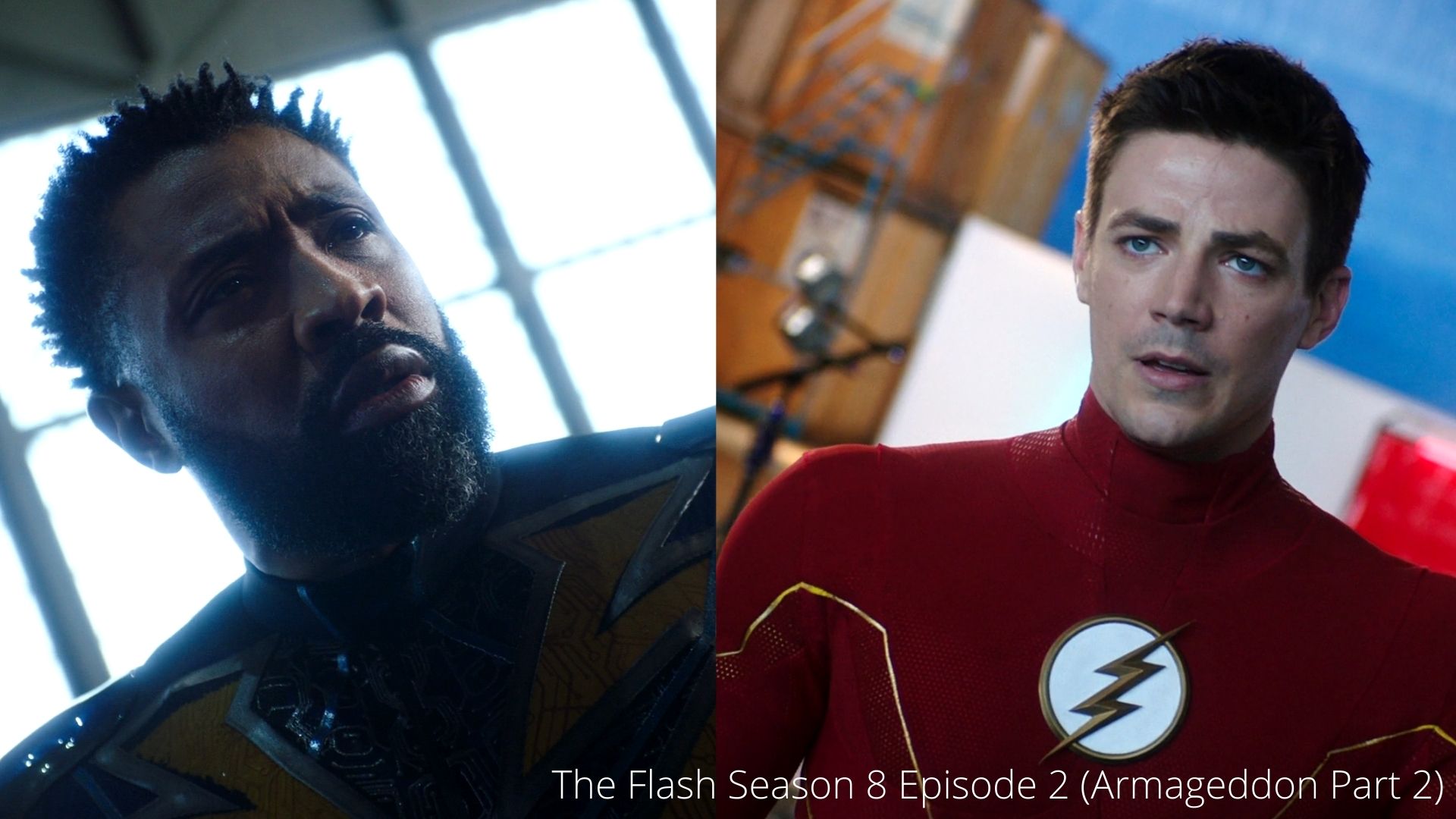 Flash meets Black Lightning at the Hall of Justice

However, Barry didn’t remember doing any of it. Iris said that the first attack at the apartment could be blamed on Xotar, but this attack was after arresting her. Soon Despero arrived there and attacked Barry. Cecile tried to stop him, but his mind was too powerful, and he put her to sleep. He then decided to use the never-dying flame of his home planet, the Flame of Py’tar to kill Flash. Although, Chester arrived on time and stopped Despero for enough time to let Flash escape. In the end, we saw Flash at the Hall of Justice trying to get help from Black Lighting, as Barry uttered out of his mouth the word ‘Injustice’.

“The Flash Season 8 Episode 3 will release on 3oth November 2021 at 8 pm ET on The CW.” Moreover, the episode will be titled “Armageddon, Part 3”. The crossover event is getting more exciting with each episode, and the viewers are now waiting for the next episode. The next episode will see Flash seek help from Black Lightning about his recent blackouts. Meanwhile, the meta criminals in the city will try to resurface seeing the news of Flash going rogue. So stay tuned for another thrilling episode of the 5 part Armageddon event next Tuesday.

The widely popular American superhero tv show is once again creating a lot of buzz and attracting the viewers’ attention. That is why the fans and the viewers are wondering about where to watch The Flash Season 8? Well, the answer to that popular question is a rather simple one. “The Flash Season 8 airs every Tuesday at 8 pm ET on The CW television network in the United States.” Moreover, the viewers can watch the show on the official website of The CW. Meanwhile, the viewers can stream the show on Amazon Prime Video as well.