Beth and John went all out in each other which saw John asking her to leave. What does this mean for the Duttons moving to the Finale. 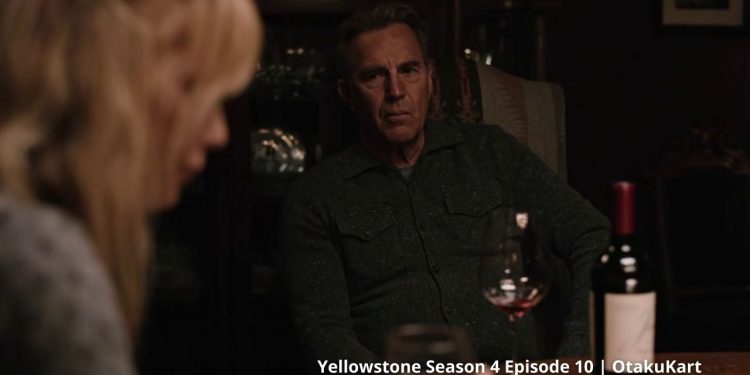 Yellowstone Season 4 Episode 10 may see Jamie making a necessary decision against John. If he doesn’t, John will continue becoming the hero and in no time win the election against him. This might be the right time, as the recent shootout that saw Sheriff Donnie dying caused some disturbance at Dutton’s.  Rip and John took care of the situation but made things tense at home. Especially on Beth’s side who cared for John and if he dies, they will lose everything they fought for. John on his side believes this is the way he deals with things.

We believed things would cool down from there on, but the case was different. John was also taking care of Summer who was behind the bars. He found out that Beth used her to get what she wanted. This didn’t fit well with John who later confronted her at the table. Apart from all of this, Jamie also found himself in a bad spot when it comes to using his father’s true face against him to win the elections. Here is a look at what went down.

Previously on Yellowstone Season 4, we opened up with John giving a history lesson to Carter telling him “There’s no such thing as fair” which also serves as the title of the episode. Beth’s concerns for John after the recent shootout grew. She confronts Rip about it and later goes straight away to John for not taking care of Jamie. John states that she got it all wrong and someone else was behind this attack. They were trying to prove themselves as the big guns but failed. The fact that John won’t finish the job fuels Beth further.

John later visits Summer in the jail. She might go behind the bars for 30 years after the stunt she pulled off against Market Equities. But before John could meet her, he meets the new interim Sheriff Bill Ramsey. He states things will be different with him around. Summer is regretting punching an officer and explains to John that she shouldn’t have listened to Beth. John on his side got things will be handling the judge in the court as the judge owes him a favor.

Amidst all of this, Jamie hates to see his father becoming a hero again. While he is advised to use who John is against him but he explains to Christina how his birth certificate could start creating problems for him later on. There will be no chance he could win the campaign. Garrett overhears this and later is also confronted by John.

By the end of the episode, John organizes a dinner where he confronts Beth for using Summer. Beth states that she was ready to do anything for Yellowstone. She doesn’t care if Summer becomes part of the damage. John on his side hates this tantrum and wants to fight with morality. All of the drama leads him to ask Beth to leave and find a new place as home. Apart from all of this, Jimmy, to keep word to John was leaving for Montana and had to bid adieu to Emily. Kayce was busy connecting with the wolf. Beth asked Walker to play her a sad song to cry upon.

Yellowstone Season 4 Episode 10 is releasing on 2 January 2022. It is titled, “Grass On The Streets And The Weeds On The Rooftops”. The official synopsis of the episode suggests we will see Denim Richards, Jefferson White, and Ian Bohen analyzing the rivalry between Beth and Caroline.

Jamie makes a fateful choice and we wonder what moves he will play against John as all cards are stacked against him. Lastly, Mia learns about Jimmy’s engagement. We are also looking forward to where the road will lead Beth as she no longer could live with Duttons. Lastly, how would the casework for Summer who might be on the verge of going behind the bars for 30 years?