The Conners Season 4 Episode 10 sees the family celebrating Mark while Jackie works her relationship with Neville. 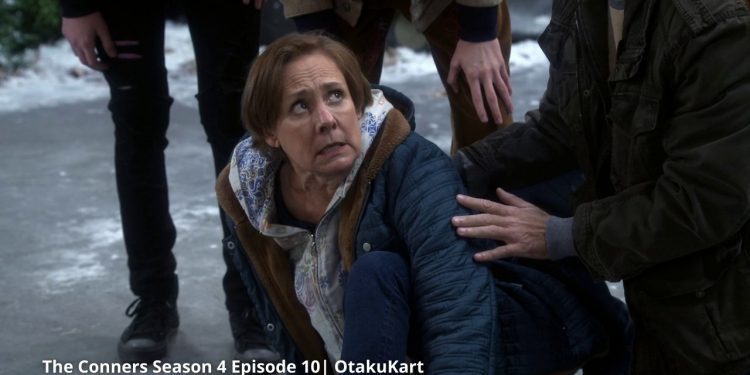 From The Conners Season 4 Episode 9

The Conners Season 4 Episode 10 sees Jackie working her relationship with Neville. The one that was so smooth until unexpected guests for Neville started coming in. Meanwhile, The Conners find themselves celebrating Mark for a feat. Before we move to all of that, recently, the show hasn’t been great for those pursuing relationships. Some completely lost one while some still had a fighting chance. Yes, we are talking about Darlene, who has been with Nick for a while, and again Nevile and Jackie it is.

So the case of Darlene and Nick had a lot to do with Darlene’s past that started coming up in front of them. Also, an encounter with one of Darlene’s ex ended up in a dinner disaster. Coming to Jackie, well for a long time, she has been looking for some alone time with Neville. Only for Neville’s son Logan to turn up. On top of that, Neville has invited someone else who might only destroy their relationship.

Previously on The Conners Season 4, Neville and Jackie, after a long time, were going to have a night for themselves. Especially since the time Logan has been staying with him. So she is planning to make it a little sensual. Even Darlene has some plans of her own with Nick, but she isn’t going to do anything fancy like Jackie is planning to.

So Jackie is ready, waiting for Neville only to see him bringing Logan again. This keeps happening, but Neville assures her it won’t next time. Logan’s mom is now sober, and if she asks Neville for a job. He will hire her, and she will take Logan back into her apartment. Meanwhile, things start falling apart for Darlene and Nick as well. Especially when he notices how Darlene still remembers things about her ex. Anyway, they wanted a fuse fixed, so they head to Darelen’s father’s shop and come across her ex Ben who had switched days with her father.

Also Read: Nicky, Rebecca, and Miguel Are On A Road Trip In This Is Us Season 6 Episode 2

So, Ben has progressed a lot since the last time he dated Darlene. Ben and Nick end up befriending each other. Jackie later came across Helen, Logan’s mother, and ended up finding that she was engaged with Neville. Coming back to Nick and Darlene, it seems like they decided to hang out together. Nick even brought one of his single friends for Ben. Unfortunately, the night ended with Darlene and Ben taking shots at each other. Nick’s friend decided to walk away. Even Nick, too, believed Darlene and Ben still had feelings for each other. Thus leading to Darlene and Nick’s breakup.

The episode came to a close with Darlene and Ben coming to reconciliation. Darlene ended up competing with Helen only to see her going for dinner with Neville. Amidst all of this, Dan was busy trying to find the perfect bed for his bedroom before Louise returns with a little help from Becky.

The Conners Season 4 Episode 10 is releasing on 12 January 2022. It is titled “Spills, Pills and the Midnight Lasagna”. The official synopsis of the episode suggests that the Conners are celebrating Mark. He made it to the dean’s list at his new magnet school. Jackie tries to make a breakthrough in her relationship with Neville. The one that has gone through a number of stumbles. First with his son Logan coming into the picture, now his ex Helen.

Who Is Kacey Musgraves’ Boyfriend? The Songstress Pens Down A Mushy Birthday Post For Her Beau!