The War situation may see Rocinante Crew on crossroads in The Expanse Season 6 Episode 1. 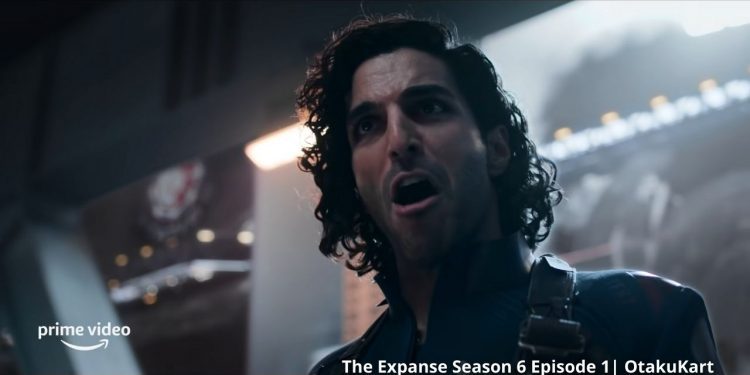 From The Official Trailer Of The Expanse Season 6 Featuring Marco

The Expanse Season 6 Episode 1 is coming in with a lot of tensions in the air. The Martians have gone rogue, and there is war ahead. These tensions could further escalate in the family of Rocinante that may eventually see them parting ways. Is this the wrath that Marco is bringing after losing them recently? Well, it was a mini-victory for Rocinante but an evident sign that with this, his plans are coming to fall. It’s just a matter of time; he will be defeated.

Therefore, in order to ensure that day doesn’t dawn upon him, Marco made some last-minute deals that helped him get through all of this. Coming to the fall of Rocinante, well, the team had plenty of close calls and Sacrifice. Despite their mini-victory, a minor mistake did see itself becoming huge. This certainly will escalate in the coming episode, and here is a look at what went down in the finale of Season 5 and what we can expect from The Expanse Season 6 Episode 1.

Previously on The Expanse Season 5, we opened up with the Rocinante crew surrounded by hunters ready to take them down. But saving Naomi was a priority they weren’t letting go of. So they did have a chance to run away, but they were willing to run through it even if it meant they had to sacrifice themselves in this fight. Therefore, while Holden puts this plan into motion, he asks Alex to rescue Naomi. Meanwhile, there is a problem with Naomi’s ship, which she is trying to tell her crew.

In order to save her earth’s friends, Drummer decides to pull off a gun on Karal. As this goes on, Naomi puts the ship in spin and dives deep into the space. At the same time, she is trying to warn Alex about the explosive hazard. Alex reads through it. Before Naomi could lose her last breath, Bobbie came to her rescue. In the process of saving her, Alex has a stroke and loses his life while Rocinante comes to Bobbie and Naomi’s rescue.

Marco is certainly not happy with this loss, while Rocinante celebrates their victory for now. Holden comforts Naomi, who he believes will be pleaded, and on top of that, she has vital information against Free Navy. Later on, the crew reunites with Amos, and he brings Clarissa onboard for some time being at least.

Avasarala, at the meeting, delivers a speech on how bringing Martians, Earthers and Belters together will result in Marco’s defeat. Something he is really afraid of. The episode came to a close with another attack at the ring. The Maritan Ships were transiting the Sol Ring. They all have gone Rogue. Turns out Marco and Admiral Sauvettere came to a deal that will allow them protection from Free Navy.

The Expanse Season 6 Episode 1 is releasing on 10 December 2021. It is titled “Strange Dogs”. The official synopsis of the episode suggests we are in for the war that may break the family Rocinanate built. The finale of the fifth season saw some sacrifices and people leaving. At the same time, unlikely foes join the squad. But war situations like this may bring out the worst. Them falling apart is certainly a treat for Marco, who is afraid that them coming together means his defeat.

Apart from that, Marco continues his wrath as he shoots down rocks on the earth. Now it’s up to  Avasarala and Bobbie to save themselves. Coming to Drummer, after the betrayal, she is on the run, and in order to save her family, she may have to deal with heartbreaking decisions. Check out the official trailer of The Expanse Season 6 below.

The Expanse Season 6 Episode 1 will exclusively release on Amazon Prime Video at around 7 pm ET/4 p.m. PT in the United States. This is usually the time we get Amazon Originals. Considering the same, we can expect for Canada. In the UK, we can expect The Expanse Season 6 Episode 1 to come around at 12.00 am while in Australia at around 10 am, while in India, we are expecting it to be around 5.30 am.