The End of Chunin Exam In Episode 228 of Boruto: Naruto Next Generations 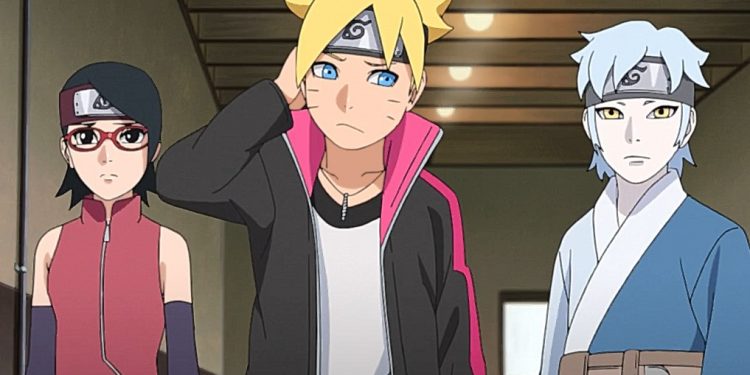 Boruto: Naruto Next Generations Episode 228 reveals the aftermath of the Chunin Exam. It happened after Mitsuki and Boruto got disqualified for not arriving in time. Sarada, Denki, and the other two students have become Chunin. Sarada is excited after racing her suit, and her mother sees that. Sakura reminds Sarada that the Chunin ceremony will start in three days. In the latest episode of Boruto: Naruto-Next Generations, Sakura decided to throw a party that Sarada has become a chunin. Sarada thought that she would be doing the same.

But Sakura reminds her that when a person gets promoted to Chunin, they become the captain of their team. Sarada realizes that she will become the captain of Team 7. Sakura adds that everything will change when she earn that position. She also says that Konohamaru will be free from watching over Team 7. Later, Sarada met with Boruto and Mitsuki and asked them to fill something. Mitsuki wonders what that is, and she reveals that it is a document that she will submit to the Leaf. Boruto reveals that it is about the new captain of Team 7 since Sarada has become a Chunin. He tells Mitsuki that Konohamaru will leave Team 7 and Sarada will take over.

Boruto thinks that they will become a three-man team. Mitsuki notices something and asks her if she feels nervous about becoming a captain. Sarada denies that, and the trio talks about Konohamaru. Boruto suggests seeing Konohamaru since Sarada thinks Konohamaru will stay with them. But they can celebrate after that. Boruto arrives inside Konohamaru’s office, but there is no one. He wonders why Konohamaru was not there since that is the time he always finds him at the office.

Shikadai tells them that they will celebrate with Konohamaru when he comes back. They left with sad faces. In the evening, Sarada talked with her mother and went to bed. But Sasuke follows her, telling him about Konohamaru leaving the team. Sasuke told Sarada that Konohamaru was a good captain, and it was time for Sarada to show what she had learned from Konohamaru. Later, Boruto finds that Mirai was taken down and head to the hospital. Sarada also reveals that Mirai was poisoned and her mother was treating her.

Sai reveals that Mirai was the only one who returned, and Boruto wonders what happened to Konohamaru. Mr. Hyogo’s underling was punishing Konohamaru at a mysterious location in the morning. Hyogo can’t believe that Konohamaru let himself be captured, and he is not telling them essential information. He thinks that Leaf Jonin are not a big shot. Konohamaru reminds Hyogo not to underestimate the Shinobi of the Leaf; Team 7 receives a mission and heads to rescue Konohamaru. When they arrive, Boruto uses a Sexy Jutsu to get near Hyogo. Team 7 fights with Hyogo’s men and free Konohamaru.

Boruto: Naruto Next Generations Episode 228 will be released on 12 December 2021. Konohamaru tells Boruto that there are many hostages, and they have to hurry and rescue them. Mitsuki arrives and reveals that they have saved everyone, and Sarada is evacuating them to a safe place. They reveal how they beat the henchmen using Mitsuki’s snakes. Let’s look at Boruto: Naruto Next Generations Episode 228 official details.