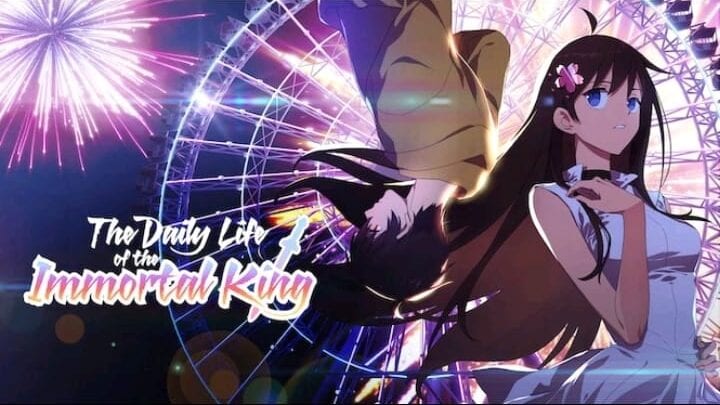 The Daily Life of an Immortal King has been making a buzz ever since it came out in January 2020. The anime that contains 15 episodes in season 1 is one of the lesser-known hits from the new Chinese anime releases of 2020. Originally known as ‘Xian Wang de Richang Shenghuo’, the anime is based on the 2017 Chinese language web novel of the same name. The novel is animated by Haoliners Animation League.

The show revolves around the powerful immortal king as a teenage boy name Wang Ling. He is trying to be low-key even though he can’t really help it. Technology and spirituality go together in the world. Magic and spells are quite popular, and students are being trained in spirituality and spells to fight off the evil in the world.  It becomes hard for Wang Ling to stay in as he finds himself falling in love with Sun Rong.

The show revolves around Wang Ling, aka the king in lurking. He has some amazing powers beyond his control, including immortality. His new challenge is the high school senior year that he must manage along with his powers and feeling for his fellow classmate Sun Rong.

There are spells, magic, weapons, strategy tools, cultivation. The ability to literally create entire realms is known as cultivation. It is also Wang Ling’s one of the greatest powers. He can easily ascend to the ranks of the Immortal Realms and beyond. Being gone through so many realms, Wang Ling’s actual age is a million years old. Even after going through so much unknowingly (which might become the plot in the new season), there is so much left to explore for Wang and his powers. Wang Ling is blessed with 30,000 Heavenly Dao in his name due to his cultivation legacy and the inherent power that runs through him. Dao is a major help for Wang to step up his cultivation game.

All Wang Ling needs and wants to do to chill and relax is to sit in the corner and eat his noodles!

What Happened in Season 1

Season 1 showed Wang being born into the world where magic and spells go into family history. He lives like a high schooler but also tries to fight off the demon and evils if needed. As the show goes on, Ling falls in love with Sun Rong more and more. He goes to heights to protect her. He has restarted the work hundreds of times to save Sun Rong. With so many restarts, failures were high too. He made use of the same power he tried to suppress before. He almost destructed the earth while trying to run away.

The ‘restart’ takes them back to the day at school, where they all first met. But Wang Ling has to give up two low score students as a ‘protection fee’. He even gave Chen Chao and Guo Hao as the protection fee to save Sun Rong. He thinks of her in every place possible, wherever they have hung out together. But he was unable to save her.

Sun Rong’s soul reaches the king. After getting to know who she was and what happened, he gave her her life back. She saw to save her, Wang Ling was about to destroy the original world with all the restarting of realms. So she tried to call him over to save him, and he reached her. In the recreated realms, they might have had a perfect ending. But the reality was different. The original Wang Ling and Sun Rong are no longer in this world. They cannot return. Wang Ling’s memory and feeling were again sealed.

It was during an event, as a part of bilibili 2020-2021 Chinese anime, on the 21st of November, 2020, when they announced that another season is on the way. It is expected to come out in late 2021 or early 2022, depending on the time it takes to finish the animation. The last episode left the fans on the verge of tears and with new possibilities in mind. There aren’t many updates out yet other than a few fan-made trailers that have been getting a lot of recognition and raising the conspiracy stories in the fandom.