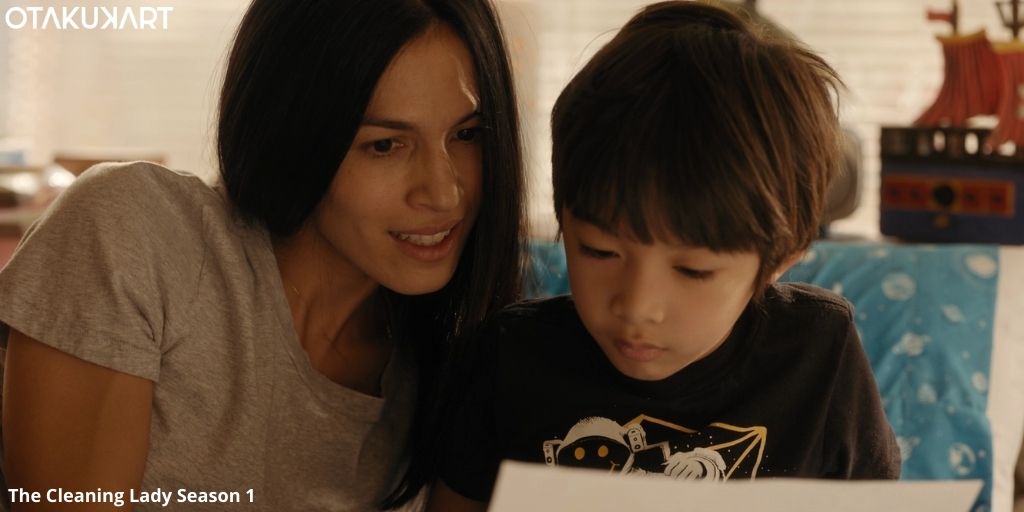 It looks like Thony will find herself in a tough spot while working on both good and bad sides in The Cleaning Lady Season 1 Episode 4. Meanwhile, the previous episode saw her finally positive about Luca’s recovery as he was about to go in for the stem cell trial. Furthermore, she was thankful to Arman for his help in getting her son the required treatment. On the other hand, Hayak gave Arman an important task to handle that was a bit suspicious.

While we also saw Hayak celebrating his daughter Isabel’s wedding with another Armenian man. However, Isabel didn’t seem to be happy about it as we saw her having a talk with Arman about her father’s forceful wish. Moreover, things got serious for Thony when the FBI agent Garret approached her asked her to spy for him at the wedding. Whereas, Thony got into trouble when Hayak’s son Tarik came into the room where she was looking for any sort of evidence to give to Garret.

But the question was, did he catch her with anything in her possession or not? The latest crime drama series has caused quite a stir among viewers around the world. That is why the viewers are now eagerly waiting to watch The Cleaning Lady Season 1 Episode 4. However, before we discuss that, let’s dive into all that went down in the previous episode.

Episode 3 of The Cleaning Lady Season 1 titled “Legacy” dropped on 24th January 2022. The episode began with an ongoing bachelor party for Hayak’s future son-in-law Ben at the casino. While Ben’s friend threw a knife while being drunk at a man and injured him that created quite a mess. Later on, Thony arrived there to get everything cleaned up but she gave Arman a drawing from her son Luca, thanking him for saving his life. Meanwhile, we saw Fiona at a lawyer’s office with her sons to talk about possible ways to get Chris U.S. citizenship. However, the fees for the lawyer and everything were too high. On the other side, Garret asked his boss, ASAC Russo, to give him a little more time to get Thony on board to work for them undercover.

Later on, he met Thony at the hospital and threatened her that if she doesn’t work for him, he will get her and Luca deported. Meanwhile, Hayak told Arman to make sure that the guests bring in a monetary gift of $25k to honor the Armenian wedding ritual. Arman managed to pull this off and got the guests to agree to it. However, he came across another problem when Councilman Knight told him about another Councilman named Wyatt asking half a million dollars in return for not spilling their secrets. But Arman invited Wyatt to the casino, tortured him, and scared him to death so he doesn’t say anything to anyone. While Thony saw Arman torturing Wyatt and decided to get out of this mess, and agreed to Garret’s offer to work for him. Eventually, Thony worked her way out and got work at the wedding. Meanwhile, Hayak announced at the wedding that he was sending his son Tarik into the Armenian military which got Tarik furious.

Furthermore, his hate against Arman was now fueling even more thinking that Arman had poisoned Hayak against him. On the other side, Thony got to the list that had the names of people bringing in the monetary gifts and took a photo of it. Moreover, she saw Arman and Isabel kissing outside. It turns out Arman and Isabel loved each other but Hayak forced Isabel to break it off with Arman. Whereas, Tarik found Thony in the room and forced her to show her pockets blaming her that she was stealing. But Arman arrived there and saved her. Additionally, she showed her pocket and proved she had nothing with her. However, that experience got her scared and she argued with Arman. Eventually, he told her never to come to him for any help. Meanwhile, she decided not to give Garret the list and told him that she couldn’t find anything. In the end, Thony learned that Luca couldn’t be treated because his liver was damaged and he needed a transplant.

“The Cleaning Lady Season 1 Episode 4 will release on 31st January 2022 on FOX at 9 pm ET.” Moreover, the episode will be titled “Kabayan”. The episode will see Thony once again asking Arman to help her son. Meanwhile, the liver donor for Luca will back out at the last minute which will create another major problem. Whereas, Garret will force Thony to spy for him on Hayak and his men.

How To Watch The Cleaning Lady Season 1? Streaming Details

Also Read: Magnum PI Season 4 Episode 13: What Will Thomas Do To Help Out The Nominee Judge?