The Cleaning Lady Season 1 Episode 3: Will Thony Blow Her Cover? 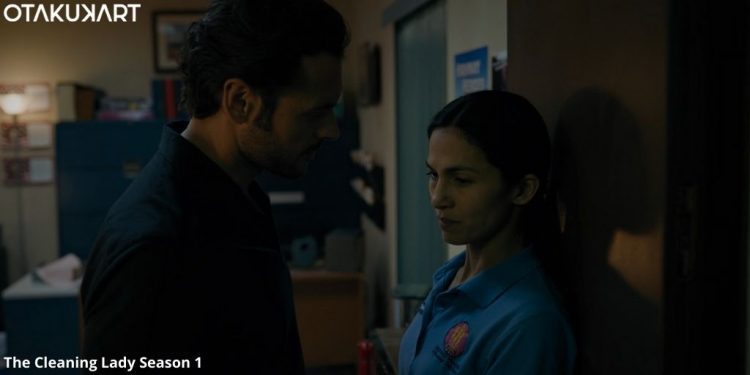 Things will get troublesome for Thony in The Cleaning Lady Season 1 Episode 3 as FBI agent Garret knows she is in touch with Arman Morales. On the other hand, the previous episode saw Thony’s son Luca getting sick, and his condition was worsening. Moreover, the appointment for his treatment was still a week away that made the situation lot worse.

Whereas, Arman suffered a major loss when his right-hand man Mateo died right in front of him while trying to protect him by taking a bullet for him. However, this all happened due to the fact that someone from the inside was stealing away the guns that were meant for shipment. Meanwhile, FBI agents Garret and Lawson came looking for Thony’s sister-in-law Fiona. But the question was, what does Fiona have to do with the FBI?

The latest American television series from FOX follows the genres of crime and drama. Furthermore, the show has received a pretty good reception from the viewers. Although, the show is not an original one and has taken its inspiration from “La Chica Que Limpia”, which is an Argentinian show. However, the viewers are quite excited to watch The Cleaning Lady Season 1 Episode 3. But first, let us take a quick recap of the previous episode’s events and check out what happened.

Episode 2 of The Cleaning Lady Season 1 came out on 10th January 2022. Moreover, the episode was titled “The Lion’s Den”. The episode began with Thony giving his son Luca his antivirals while she was ready to leave for work. Meanwhile, later at the bowling club, she kept calling a guy named Ronnie to supply her the meds for Luca, but he was not answering. After a while, Thony met Garret in the men’s toilet where she was cleaning. Although she had no idea, he was an FBI agent. But he eventually came clean and started to question her about the night of the fight at the warehouse. He even showed her photos of Arman and her men, but she simply denied knowing them. Furthermore, Fiona arrived there, and Garret decided to leave.

On the other hand, Arman was hosting some weapon buyers, but he learned that a lot of weapons were missing. He figured out that there was a thief amongst them. Although, things heated up when he tried to tell the buyer and his men, which resulted in a shoot-out. Furthermore, the shootout took the life of Mateo as well, who tried to take the bullet for Arman. Arman still handled the situation and promised the buyers to get their shipment in 24 hours. Meanwhile, he called Thony to clean up the mess. While finishing up, she saw a man named Jimmy who seemed nervous, but at the time, she didn’t think of it as anything suspicious. On the other hand, we saw Arman arriving at the hotel that his boss Hayak is planning to buy. Meanwhile, at the bowling club, FBI agents Garret and Lawson officially questioned Thony’s sister-in-law Fiona. But Thony arrived there on time and got her out of there.

Although, things took a more serious turn when Luca fell sick. Thony had no other choice but to take him to get treated, but her intuition led her to the hotel where Arman was. Seeing Thony with Luca in her arms, Arman personally took her to the hospital and got Luca set up for treatment. Just when things slowed down a bit for Thony, she got called into the warehouse again, but this time by Hayak, who wanted to kill her. However, Arman tried to stand up for her telling Arman that he could trust her. Additionally, she proved her loyalty by telling them about Jimmy, who turned out as the thief who stole the weapons. On the other hand, we saw Garret showing Lawson the photos he took of Arman and Thony together while they were getting out of the hotel. In the end, we saw Luca eventually recover to a better condition.

“The Cleaning Lady Season 1 Episode 3 will release on 24th January 2022 at 9 pm ET on FOX.” Furthermore, the episode will be titled “Legacy”. The episode will see Garret getting hold of Thony and asking her to work as an informant. Meanwhile, she will try to get some crucial documents as per his instructions. However, she might get caught by Hayak’s son that will put her at risk.

How To Watch The Cleaning Lady Season 1? Streaming Details

The latest crime drama from FOX has got the fans intrigued about what will happen next as the show moves ahead. Therefore, they are searching about where to watch The Cleaning Lady Season 1? That question has a pretty simple answer. “The Cleaning Lady Season 1 airs every Monday at 9 pm ET on FOX in the United States.” Furthermore, the show is available to stream on Hulu as well.