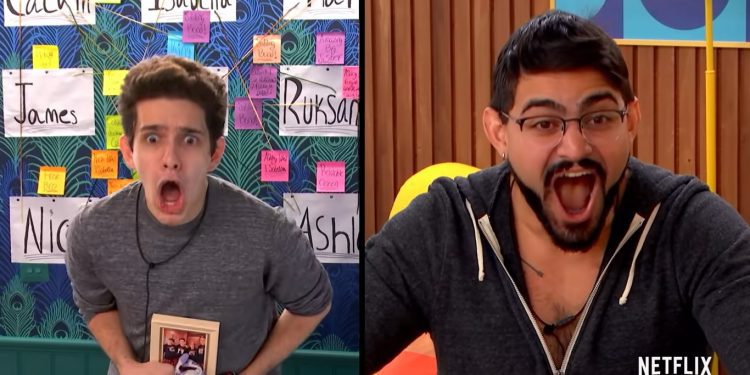 After loads of catfishing and devising plans, the third season of The Circle finally ended. James Andre Jefferson took home $100,000 & thousands of hearts! The Circle is a Netflix reality series presented by Michelle Buteau. The American reality competition premiered on January 1, 2020. It is based on the UK version of the same name. That’s the reason why The Circle is referred to as The Circle US. It has launched in many international versions and is extremely popular among Netflix viewers. The third season garnered 20 Million views in 28 days! That explains the show’s popularity. Produced by Studio Lambert, The Circle has completed three seasons. Its unique idea of the reality show makes it so addictive for the viewers. The good news is that Netflix has officially announced in August that The Circle Season 4 will get released soon!

Even though it is a reality competition, the series is primarily about social media. In the Circle, anyone can be anyone! The format of Catfish & Big Brother has got creatively combined. Players get confined in apartments where they can only communicate through the social media app of The Circle. The participants devise plans and do catfishing to lure the other players.

The one who gets the highest rating till the end wins the cash prize of $100k. Netflix executive Brandon Reigg shared his views about The Circle. He said how incredible it is to see so many viewers engage in the reality show. Brandon also stated about every fan’s enthusiasm towards The Circle. He promises to bring more such ideas to Netflix. So let’s find out the release date of The Circle Season 4.

Also Read: Chloe and Mitchell From The Circle Dating or Not? Latest News

The Circle Season 4: Release Date Of The American Reality Series

The official announcement is yet to come for The Circle Season 4. But one thing is sure that the next season will get released, and it will be in 2022! Analyzing its past announcements, we can get the closest release date. The Circle is one of Netflix’s most appreciated reality competition series. Giving more than a year gap would harm its esteem considerably. And that is why The Circle has not jumped a year so far! The American TV Series premiered on January one, 2020. The production of the hit show took time to redevelop. That is why the second of The Circle got released in April 2021. Netflix required only five months to launch the third edition of The Circle. The third season got released in September 2021. So the fourth season will probably get announced within the first half of 2022. But the main question is when?

The Circle does not have an exact release pattern. That is clearly observable after you see its past release dates. But it is not that hard to predict when the next season will release! Apart from The Circle, Netflix has many other reality series on its plate for 2022! There is no official announcement for the second season of Love is Blind. But it is certainly going to release in February 2021. Too Hot to Handle Season 3 is probably launching between January & March 2022. Netflix surely does not want their hit shows to get all mixed up in the same month! Considering the release dates of the other TV shows, The Circle Season 4 will release in March 2022! Too Hot to handle might release in January.

Also Read: Can Rome and Regina Patch Things Up in A Million Little Things Season 4 Episode 9?

The format of The Circle is quite interesting! The production location is an apartment building. Several players move into unconnected apartments inside that building. The players are confined from the external life and also from each other! Contestants cannot communicate with each other person to person. The only way they can communicate is by texting each other. They get provided with a uniquely designed social media app. It allows them to portray themselves through photos, text messages, or biographies. Contestants can choose any one of the given options.

The Circle is famous for catfishing! Catfishing is a tactic used to lure another person into a relationship using social media. The players are not forced to do catfishing, but if you want to win, you got no choice! Contestants can make a completely different persona for themselves to lure other players! One player in the first season changed his identity completely. He presented himself as a female, trying to tempt the players in a tricky way!

How does The Elimination happen?

After every few days, players intimately rate the other players from first to last. The average rating is shown to all the players, displaying from lowest to highest. Two of the highest-rated players are called the Influencers. Influencers have the power to eliminate the remaining players with a joint agreement. Elimination of the lowest-rated players is instant. An influencer’s identity is a secret to all. But the eliminated contestants can meet one of the influencers of their choice. The remaining players can also see the video message to realize whether the eliminated players were a catfish or not! In the finale, contestants rate each other, the highest-rated wins the cash prize of $10,000. 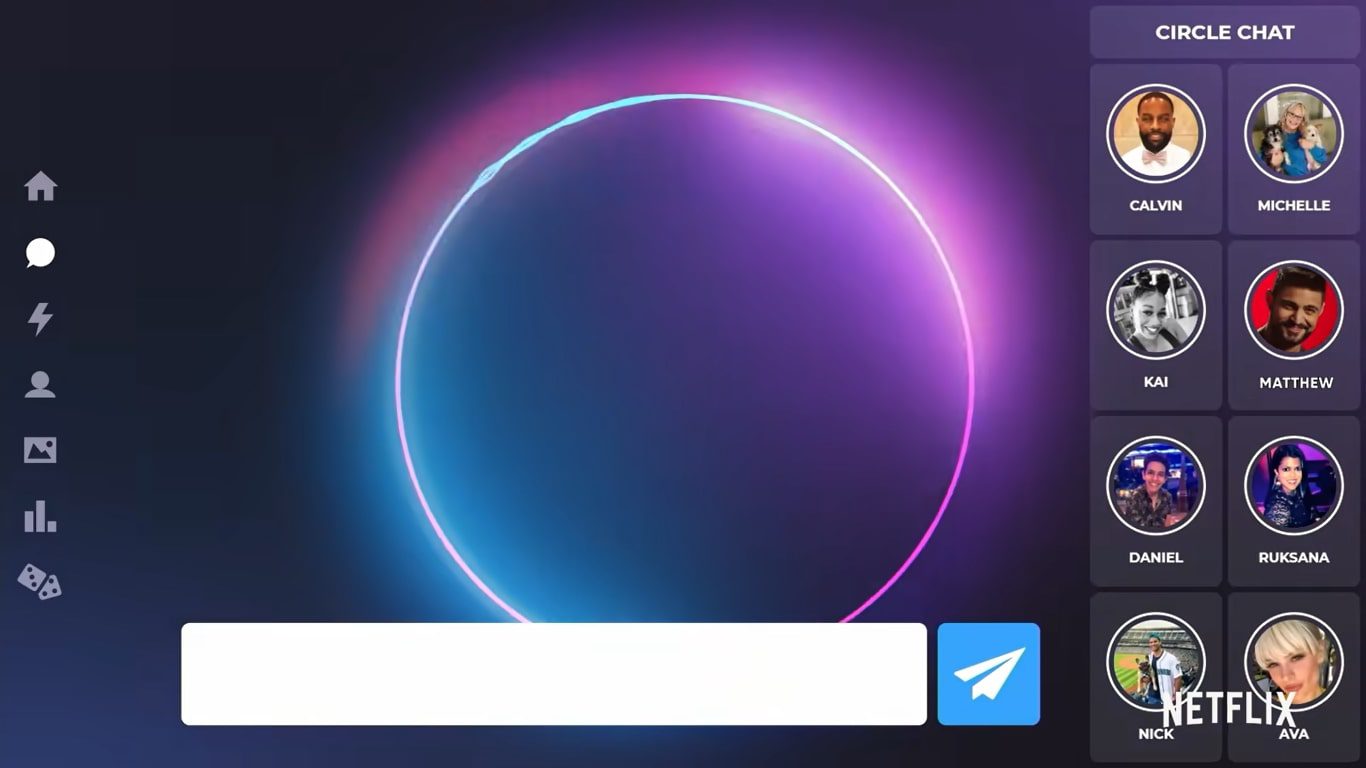 All You Need To Know About The Production Details

The majority of the filming has been done primarily in the apartment building. The building is in Salford, England. It got equipped with twelve decorated, fresh, ready-to-use apartments. The Circle’s production house also has a workout room and a lounge on the rooftop. All of them are armed with cameras & TV screens! There is an extra room, called the testimonial room. That is where they produce their goodbye videos for the others players to see. The exterior of the building has an enormous design that looks like a circle. The Circle is fabricated with aluminum cut & LED lights around the design. The inverse side of the building has a production room for the editors and show operators.

Let’s talk about the Circle App! Once the players move in, they will witness an apartment coated with TV screens. Through those screens, they can converse with other contestants. In the beginning, every player has to create a unique profile! It covers the age, relationship/marital status, bio, and any photo for the profile picture. After every 24 hours, the players update their status (like social media!) They usually share their thoughts about the players and themselves.

In one of the episodes, The Circle urges the players to participate in any minigame. After watching the games, fans learn who is more decisive and has a good relationship. Each episode has a rating task in the end. After the players rank each other, an average score is displayed. It will determine their future in the game. The top two ranked players become the Influencers. Influencers get the power to decide the lower-ranked player’s future with a mutual agreement.

The Circle does not give much importance to recruiting celebrities for their show! It is going to stay similar for the upcoming season. The Circle has a casting website specially made for this job. Thousands of people apply for the show. It helps in finding the perfect applicants for the Netflix series. The minimum age for applying is 18. There is no restriction to the age limit. In the previous season, a player named Michelle, a TikToker was 53-year-old!

The host is also going nowhere! Our favorite TV host, Michelle Buteau, will be the presenter for the upcoming seasons. Being a stand-up comedian, she has a huge influence. She keeps the players encouraged and motivated till the end. With her vivid style of narrating the show, the fans, as well as the players, take great interest in The Circle! Fans keep on communicating with Michelle, asking her questions and commenting on the show’s episodes. Michelle’s sarcasm has a huge part in The Circle’s success!

Also Read: Do The Feds Nail the Anthrax Letter Sender On The Hot Zone Season 2 Episode 6?