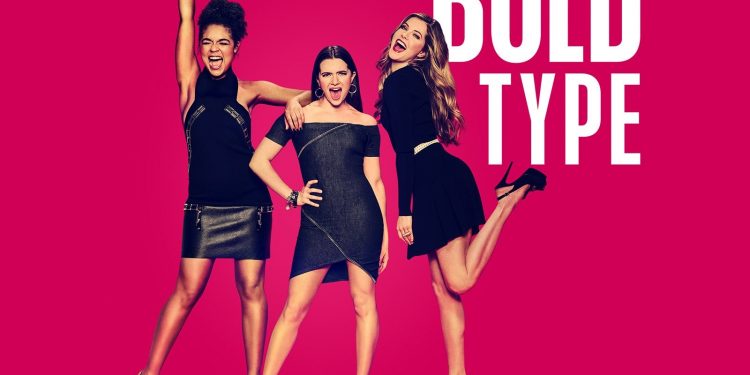 The Bold Type is a popular American comedy-drama series. And it is entirely based on the lifestyle and career decisions of Joana Coles. Moreover, she is the editor-in-chief of the Cosmopolitan Magazine. The popularity of this show enabled the creators to come up with five more seasons of this show. Thus, people are wondering if season 6 of The Bold Type will premiere or not. The creator of this show is Sarah Watson. And guess what? She intrigues the audience to watch every new episode of this show. Sarah made sure that she will direct all the attention towards the story of three different ladies and their lifestyles.

The original network of this show is Freeform. The first season of this show aired on July 20, 2017. Followed by all the other four seasons. Until the fifth one was released in May 2021. However, the viewership ratings of this show led it to broadcast on different streaming platforms like Netflix. The show inspires everyone willing to hit off their business with teamwork and dedication. Moreover, the concept of this story attracts everyone towards the creators of this show because the viewers wanted to know more about the release date of The Bold Type season 6.

The story surrounds the life of three women who are willing to expand their friendship into a partnership. Moreover, their life in New York has taken a huge toll on their personalities. Nevertheless, their main aim is to set their personal and professional lives amidst all the pressure. Every character from this story has their own set of struggles, and it’s appreciative of the creators that they’ve given equal importance to each of the characters. To be more precise, Jane, Kat, and Sutton are best friends, and they all work together at Scarlet magazine. Moreover, they work for Jacqueline.

The first season of this show covers up the beginning of their career. Each one of them got their respective jobs. Gradually, the girls deal with a lot of problems. Moreover, their personal and professional lives are connected as well. Kat falls in love with Adena, an LGBTQ+ Artist. But things take a different turn when she realizes that Adena already has a girlfriend. It’s good to see the way these women have juggled the struggles of their life. The show was inspiring for many young individuals. Moreover, each one of them has a different personality, but they still connect at some point.

The fourth season of The Bold Type premiered on January 23, 2020. Well, when it comes to Scarlet magazine, it primarily focuses on all the issues related to women. By this season, the girls have consequently reached a secure position in their careers. When it comes to all the other characters, Jane is one of those characters that fans love to watch. People mostly resonate with her life. Kat’s personal development was really interesting to watch. Throughout the first season, she was very confused about her identity. But this season highlighted her life, and it was pretty interesting to watch.

Speaking of Sutton’s life, things are pretty difficult for her when it comes to her personal life. Nothing is working well with Sutton and Richard. On the other hand, her professional life is booming. The creator of this show displayed the happiest yet the saddest moments as well. Every character is equally successful and depressed in their career or personal life. Moreover, the first three seasons didn’t cover much information about the editor-in-chief of Scarlet. But the fourth season genuinely covered all the angles about her personal development. Moreover, by season 4, we get to see more of Patrick Duchand, as he becomes the new head of Scarlet’s digital department.

Also Read: It’s Always Sunny In Philadelphia Season 16: When Can We Expect The Gang To Return?

Moreover, Jacqueline had to face a lot of struggles since Scarlet had become digital. On the other hand, Kat is trying her best to get trans women to enter the marathon competition. But Chloe isn’t able to participate since the marathon officials won’t recognize her. But soon, Kat ends up fixing this issue by talking to the officials directly. On the other hand, Jane’s personal life is going pretty well too. Moreover, Jane was happy to release her new article about Mia- a sexual assault survivor. By the end of season 4, everybody has become successful.

Season 5 of The Bold Type had a very different outlook. Moreover, the viewers of this show loved the angle of Kat since she is offered the position of the new editor-in-chief of Scarlet. This was completely unexpected. But honestly, Kat deserved this opportunity. Kat was surprised to get this offer because she never expected this from Jacqueline. On the other hand, she assures Kat that she’s got the right leadership skills for this position. Jacqueline always wanted to replace her position with someone who was just like her. But soon, her opinion changed.

The fans of this show knew that Kat was meant for this position. Well, Kat was fired from the company. But, this didn’t turn out bad for her. Instead, she got the chance to live her life, as per her interest. This is the main reason behind her awakening. The creators of this show maintained the authenticity of the show. And all the things covered in this series genuinely happen in real life. It was good to see that Jacqueline left off her superiority towards the younger generation. Moreover, this season has taken a lot of advances as well.

Also Read: Is American Rust Season 2 Happening? Is it Renewed, or is it Canceled?

Jane wanted to leave Scarlet for living her dreams of traveling. Speaking of these characters. Jane was the most outspoken and confident one. Eventually, Jacqueline wanted Jane to be the editor-in-chief of Scarlet, but Jane chose to travel. She was never meant for this to happen. On the other hand, things are going well for Sutton and Richard. Richard pops up with the divorce papers. But still, they got back together. She began therapy to keep herself happy. But things will get better with Richard. The fifth season had ended with only six episodes. Whereas all the other seasons had around 10 to 16 episodes.

The fifth season of The Bold Type was released in May 2021. Many viewers didn’t appreciate the idea of releasing this season with six episodes. Because every season had a full-fledged explanation of the plotline. Moreover, fans were happy to see Sutton and Richard get back together. They had several ups and downs in their relationship. But still, they got back together. But when it comes to Kat, things finally got better. Towards the beginning, we never thought that Adena and Kat would ever have any kind of connection. But this finally worked out.

Kat and Adena are officially looking towards their romantic relationship. One thing was clear that Kat met her when she was at her lowest. And at this time, Kat never really knew about her sexuality, and she was not at all confident about herself. But eventually, they found their way. On the other hand, Richard finally understood Sutton’s importance in his life. He chose Sutton over the idea of having kids. And this was appreciative of him. And it seems that the creators of this series changed Sutton’s story at the last minute. They had something else planned out for her.

Also Read: How To Watch The Witcher Season 2 Online?

Sadly, there won’t be a season 6 for The Bold Type. Season 5 was eventually the end of this show. And the ending of season 5 kind of made it obvious too. This show was one of the main reasons for Freeform’s increasing popularity. Mainly because of female representation, the storyline of this series had a huge distinction in its proceedings. Well, the fifth season ended in early 2021. And it was already confirmed by the writers of this show. Many fans were highly disappointed with this revelation, but eventually, it was for the good. The creators never wanted this show to be too draggy or wasted.

Season 6 is surely not happening. The crew members of this show shared their opinion about their experiences of working together with the amazing team of The Bold Type. Well, there wasn’t any reason behind the cancellation of this show. But as per the creators, it was time for that show to end. And it naturally reached the end. Nobody changed the dynamics of this show. Well, the pandemic caused a lot of problems for the team. Since they had to cut off episodes from season 4. Eventually, the season had 18 episodes, but because of the pandemic restrictions, they had to change the schedule.