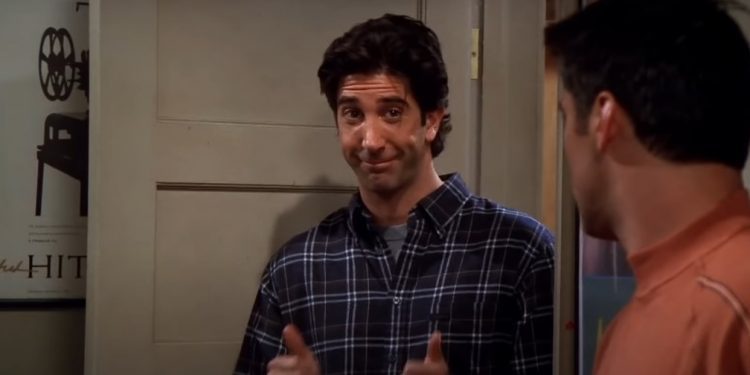 Here, we have the best Ross Geller quotes from Friends. That’s right, the weird, quirky, loser paleontologist portrayed by David Schwimmer in the classic sitcom created by David Crane and Marta Kauffman. In the 1990s, Ross Geller’s antics made us laugh out loud. Along with the series, Ross was the on-again, off-again romantic interest of Rachel Green (played by Jennifer Aniston). He’s brother to Monica Geller, the chef and cleaning-obsessed woman who constantly nags everybody about the order in her apartment.

Ross went to the altar thrice: First with Carol Willick, only to get really disappointed about that marriage when he finds out that the cause for the divorce is that she’s a lesbian. Later on, he was about to marry Emily Waltham, and that doesn’t last long because Ross’s infatuation with Rachel causes him to mess up some words at the altar. Later on, he marries Rachel at a drunk wedding in Las Vegas. But let’s not get too ahead of ourselves, and let’s begin taking a look at some of the greatest quotes by Ross Geller from Friends.

Unagi is a total sense of awareness

In a very remembered episode, Ross Geller constantly scares everybody appearing from the corners while yelling “Danger, Danger” and claims that after years of training in Karate lessons, he’s learned the art of “unagi” when he actually means “uranagi”. All across the episode, he claims he has “unagi”. Even managing to piss off Rachel and Phoebe, who take a class to pin the guy down after scaring him like a little girl and force him to say that “they’re unagi”. Only to have Ross sluggishly reply that “unagi is something you have, not something you are” before the two women bump his head against the ground for his petulance.

Chandler Bing goes to Joey’s long-time tailor for pants fitting and got a bit of a shocker. It turns out that when the tailor measures the inseam of his pants, the tailor groped Chandler’s balls. After that, Chandler angrily complains in front of everybody, and Joey tells him that that’s normal procedure when tailors measure you for tailored pants. Only to have Ross Geller jump in with the one-liner “Yes. Yes, it is…in prison”, implying that that kind of unwarranted groping is only admittable in male correctional facilities.

You-You Threw My Sandwich Away…?

When Ross got divorced, that was a bit of a rough patch for him. Firstly, after his marriage ended, he had to cut all ties with Rachel Green. And then he had to cut spending time with his friends at his sister’s apartment. Later on, he had to cut spending time with his friends at the coffee shop. The man was on edge, and his only comfort was the leftover turkey sandwich that his sister Monica made him after Thanksgiving day. Unfortunately, his boss took the sandwich and threw it away. And Ross had a bit of a meltdown. A meltdown that was so bad he yelled at his boss so loudly that pretty much everybody in the West Village of New York City heard it, and he got sent to the psychiatrist for anger management.

Get Off My Sister!!

In an iconic episode where everybody —except for Ross— knew that Chandler and Monica were getting it on., Ross got an apartment with a view across the street from Monica’s house. One night, when Ross was happy and settling in his new place, he looked out the window. He was joyous that he could actually see across the street and see his sister’s window apartment. But what he saw really pissed him off. He saw Chandler passionately french kissing his sister. After that, he ran across the street, went up the stairs, and in a fit of childish rage, yelled: “Get off my sister!”

I Take you, Rachel, as My Wife…

Rachel Green was always Ross Geller’s love interest across the series. The infatuation was so bad for the poor dude. Firstly, he had been eyeing her since high school. During adulthood, he was constantly jealous of her partners and love interests. And when it came to him, when he finally seemed to love someone else. Enough to take that woman to the altar, pronounce the words and say, “I take you, Emily, as my wife…” what did Ross say? He said, “I take you, Rachel, as my wife”. For the shock of awe of everybody, even the bride! A funny and painful moment for Ross.

Remember when there weren’t any other Santa Clause or any other Christmas-themed costumes available, and all that was left was… an armadillo costume? This was ideal for Ross, who tried to teach Ben about Hanukkah and made the decision that he actually required Santa as well, only to find out that he was too young and too late to order a costume. You gotta ask yourself, what was he expecting?!  So, like Ross Geller, he rented whatever outfit they had that turned out to be… the Holiday Armadillo. Ross’s nasal voice proclaiming, “I’m the Holiday Armadillo!” will be remembered for its hilarity.

Also Read: Friends: How Many Seasons Are There?

We Were On A Break!

This one is a recurring gag for any “Friends” fan. It turns out that when Rachel Green and Ross Geller have an argument in the famous episode “The One Where Ross and Rachel Take a Break,” the couple have a rift because Ross mistakenly thought that Rachel was cheating on him with a co-worker. But it turns out that Rachel was fed up with Ross’ fighting about his jealousy, so she ends up cutting him off. Later on, in several other episodes, the phrase comes up several times whenever the relationship status between the two pops up.

If there’s something I love about Friends and the 1990s, in general, is how little attention they paid to these quirky things that Gen Z and the “politically correct” crowd clings on to nowadays. One of them is calling out fat people. Monica Geller was a fat girl. Everybody made fun of her. And you know what she did about it? Instead of eating her feelings away, she went to the gym and became the lovely Monica Geller that everybody loves.

When Monica got pregnant and went to get a sonogram, her eating habits when she was a fat girl came out again. During the conversation, Rachel said how fast Ross eats his food. And answering that remark, Ross wittingly said: “I grew up in a house with Monica, Okay? If you didn’t fast, you didn’t eat”. And that was because fat Monica would eat everybody else’s food.

You Have No Idea How Much This Hurts

Only pregnant women know what the pain of labor feels like. But not Ross Geller. Oh no. When Rachel was giving birth to their baby, Ross got hit in the head with Rachel’s head, and he began whining like a little b*tch in his girly voice, crying, “you have no idea how much this hurts”. Only to see Rachel give him a look so cold that if looks could kill, Ross would be six feet under.

Where to Watch Friends?

You can watch all 10 seasons of Friends via HBO Max, DirecTV, Fubo TV, Spectrum, or TBS if you live in the United States. Also, if you live in the United Kingdom, “Friends” is available via Virgin TV GO and Netflix, as well as Amazon Prime Video, Apple iTunes, Google Play, Rakuten TV, the Sky Store, and The Microsoft Store. Additionally, if you reside in Australia, the show is available via Netflix, Binge, and Foxtel Now. Lastly, if you happen to live in India, you can enjoy this program via Netflix. With this, we conclude our coverage of this topic here at Otakukart. Thanks for reading this piece, and please keep coming back for more daily updates on all your favorite shows and movies.

Also Read: James Michael Tyler Has Passed Away, A tribute to The ‘Friends’ Actor