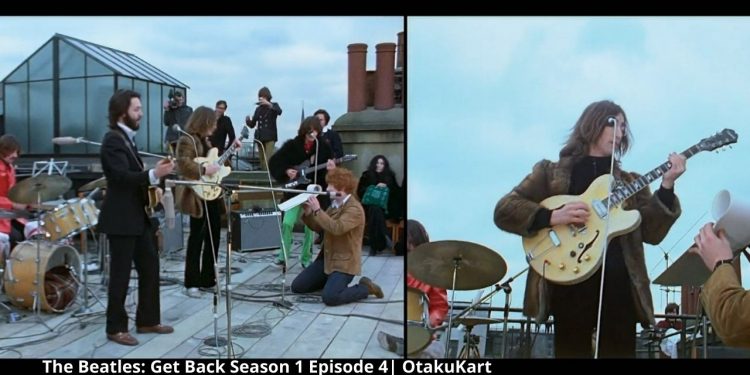 The Beatles Get Back Season 1

The Beatles: Get Back is a momentous release that has got the entire world talking about the rock band again. Well, as a band, The Beatles always stayed with the times and gave something new to the masses. Now, Peter Jackson told us the same. Jackson’s documentary justified that their music is going to stay for years to come. No one can touch them at this point. Now with the third episode that delivers the iconic rooftop performance. Was that all we had from The Beatles: Get Back Season 1 or does Peter Jackson has much more in his pocket with an Episode 4.

So we will be taking a look at the same as we first break down everything that went down in the most recent episode. The Beatles have limited time to record their new album. From iconic songs to new ones joining the frame. On top of that, planning to do something like a Rooftop Performance. An idea that may change the way the world looks at the Band, or they may just receive backlash for the same. Here is a quick look at The Beatles: Get Back Season 1 Episode 3 before we move to Episode 4.

Previously on The Beatles: Get Back Season 1 Episode 3, we picked up to the point where The Beatles were rehearsing for 16 days now to create a live album. Accompanied with the album, there were plans that the band would stage a live performance for the audience. In episode 2, the rooftop of the Apple Studios was a place considered the best for the live performance. The latest plans included the same, and the band was three days away from the day of the performance.

So episode 3 saw The Beatles rehearsing some of their popular songs, such as “Octopus’s Garden” that opened up the episode. Then we heard “Don’t Let Me Down” and “Let It Be” again. We also saw the creation of songs like “The Long and Winding Road” that appeared on the B-Side of the coming album in future. Also, when it comes to the Rooftop performance, the band had to choose the songs they will be performing. There are a few compromises they had faced, like, for example, the Grand Piano was out of the question.

Apart from all of these, the tabloids mentioning John Lennon and Yoko Ono’s love also made their presence felt. Halfway into the episode, questions of whether they should push for the album or the TV show or wait and get hold of their songs came into the process. By the end of the episode, the day for the Rooftop performance arrived. Five cameras surrounded the band, with one across the street on another building.

The Rooftop Performance blew London away. No one saw that coming, The Beatles were kind of playing a free concert. Some supported it and joined to enjoy it. Some were against it, and nearly 30 complaints were registered. All of them due to the noise and cops came trying to shut down the concert. At the end of the day, London was alive more than ever, and The Beatles Rooftop Concert went on to become one of the greatest live performances ever.

The Beatles: Get Back Season 1 Episode 4 Release Date & Spoilers

The Beatles: Get Back Season 1 Episode 4 isn’t happening. The entire show was a three-part documentary with a runtime of over two to three hours in each episode. Therefore, it comes up with never-before-seen footage of around 8 hours that features The Beatles working on their twelfth and final album. The one that is named Let It Be later on. At the same time, the group decided to bring something new into the picture by surprising London with the legendary Rooftop Performance that closes the documentary.

The Beatles: Get Back Season 1 Episode 4 Release Time & Streaming Details

Also Read: Why Did The Beatles Break Up?