The Gang continues their adventures in Ireland, let it be pranking Charlie and his pen-pal or climbing a mountain for their friend to complete an Irish ritual. 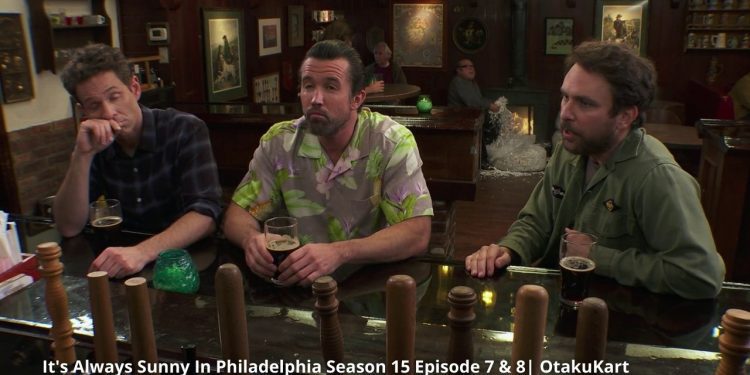 From It's Always Sunny In Philadelphia Season 15 Episode 6 Featuring Dennis, Mac and Charlie

It’s Always Sunny In Philadelphia Season 15 Episode 7 & 8 continues the adventures of Gang in Ireland. Mac might not have been Irish all this time, but he found a new mission for his life. Charlie finally found his pen-pal, who lived in Ireland all along. On top of that, he is someone very important to his family. Lastly, if not the one she came for, Dee still grabbed a role that she has been longing for forever. But living in Ireland is not as easy as it sees as the gang was left with only one room to stay.

So recently, on the show, after her auditions, Dee woke up again to realize the gang not only had hijacked her trip but also her room. Dennis was willing to fit into that room with the other four, so he left with Denis to look for a different hotel until his sickness kicked in. Coming to Frank, after clearing everything related to Frank’s Fluids, he joined Charlie on his quest to find his pen-pal while Mac visited Church for a new life. Here is how all these events came together.

Previously on It’s Always Sunny In Philadelphia Season 15, the gang was in Ireland for Vacation except for Dee. She came here for the role of “Obnoxious American MILF” in an Irish Soap Opera. Dee, on her side, was angry at the rest of the gang for dividing her first-class ticket for everyone and coming to Ireland while she was drunk. But she didn’t have time as she had to rush to auditions. On her way, she got hit by a car to receive a bump on her head. Luckily, the shoot was delayed by an hour, and Dee had some hopes to fix it.

Charlie and Mac spent time trying to get to know about Ireland and its history. Frank took Dennis to visit his old Frank’s Fluids in Dublin. While Dee came for help, she and Dennis found out how Frank’s Fluids went down. Their names were there on the documents, too, and they needed to shred them. The episode came to a close, with Mac finding out he is not Irish. Dee realized someone had already replaced her for the role, but luckily after begging a lot, she got the role of an abused wife.

Also Read: Natasha Returns In ‘And Just Like That’ Episode 3

The gang continues their stay in Ireland as they get together at a bar, with Dee waking up after being hit by her own friends. Things go sideways when they find out that they have only one room to sleep. Dennis opts out of the situation, and Dee joins him to look for another hotel. Charlie is on a quest to find his pen-pal from Ireland, who he believes is his brother Shelly Kelly. After realizing he is not Irish, he is Dutch, Mac decides to serve God, which leads him to the Church.

Dennis, despite denying, is suffering from some sickness. Looking at the same, Dennis and Dee are offered an old house with a notorious criminal history. At night, Dennis gets possessed and attacks Dee with an ax. Coming to Charlie, he finds out that his pen-pal is actually his father. They get along as Frank and Charlie stay at Shelly’s house for the night.

It’s Always Sunny In Philadelphia Season 15 Episode 7 & 8 is releasing on 22 December 2021. Episode 7 is titled” Dee Gets Stuck in a Bog”. The official synopsis of the episode suggests Mac continues to spend time at the seminary learning to become a priest. Meanwhile, Dennis and Frank come up to plan a prank to humiliate Charlie and his pen-pal Shelly Kelly. Lastly, Dee prepares for a date to come.

It’s Always Sunny In Philadelphia Season 15 Episode 8 is titled “The Gang Carries a Corpse Up a Mountain”. The official synopsis of the episodes suggests the gang is helping Charlie to fulfill an old and mysterious Irish burial tradition. In order to complete the same, they would have to climb up a mountain. Probably we will see the Gang backing down one by one until a determined Charlie is left alone.

Alejandro Fernández’s Net Worth: How much is the Mexican Singer Earning in 2021?

How Many Chapters are there in My Hero Academia Manga?