Preview: That Time I Got Reincarnated as a Slime Season 2 Part 2 Episode 15 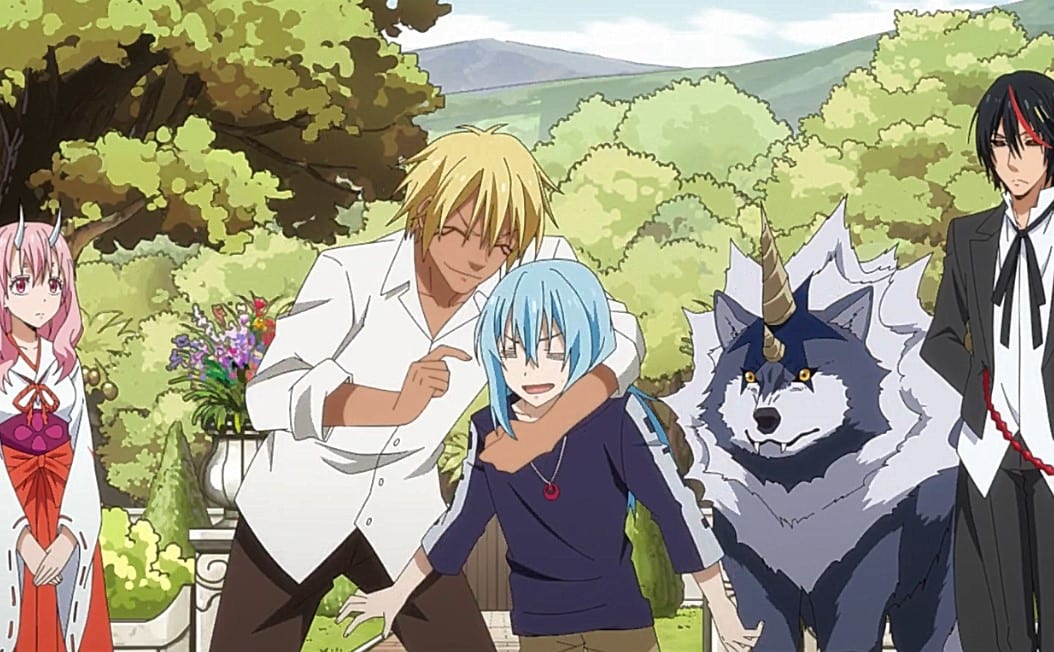 That Time I Got Reincarnated as Slime Season 2 Part 2

The adventures of Great Rimuru continue in That Time I Got Reincarnated as Slime Season 2 Part 2. The episode begins in the Holy Empire of Lubelius ”Inner Sanctum” where a jug with a red nose got killed after flashes or red lights. The guy who got kicked wonders why there is a vampire in a Holy place. The guy in front of the red nose guy told him to mind his tongue since he tainted the Holy throne of God.  That guy also said anyone who disgraces the one and only God, Luminus, will not be tolerated.

The red nose guy got killed with a single blow as he tries to escape. The episode is titled ”A Meeting of Humans and Monsters.”  The boss notices that Laplace has been through the trouble and as if Laplace has found out what the Western Holy Church is. Laplace replies that security was too tight, and he couldn’t get near. Laplace feels pity for a slime that got wrapped under his boss’s plans. He realizes that boss is hissing behind the face of the Grandmaster. The boss is Yuuki Kaguraza, who looks like a human.

Yuuki feels honored that Laplace praises him and he had repaired the reward he promised. Laplace laughs at the lady that Yuuki is saying she is the president. The lady told Laplace not to mess with the Demon Lord Kazaream when he hasn’t seen her in 200 years. Kagali is the former Demon Lord Kazaream, and Laplace welcomes her back. Laplace reminds her that the moderate Harlequin alliance has been waiting for her. Footman, Tear, and Clayman are waiting for Kazaream. Yuuki reveals that Demon Lord Kazaream didn’t get fully revived yet.

Also Read: All Anime Movies Coming Out In Summer 2021

Previously on That Time: I Got-Reincarnated as Slime Season 2 Part 2 Episode 14

Demon Lord Kazaream said that her powers are lower from the time when she was in her prime. She gets angry and curses Leon Cromwell, and Yuuri told her not to complain about her new body. Laplace stares at Kazaream while laughing at her. Kazaream wonders if he will stop laughing. Yuuri told the two that they can get down to the business. Yuuri asks the two if they have something on the Western Holy Church. Laplace replies that they have something.

Laplace said believers go there to worship, and they won’t put anything scary. He said he head to the top of the sacred mountains thinking that he will find something in the inner sanctum. But the vampire-looking guy shot a red beam at him, and  Yuuki wonders how Laplace survived that blow. Kazaream adds that it is not a red beam; it is a Blood Ray that turns blood into magic particles fired as a beam. It is a signature attack of the Demon Lord Valentine known as the Blood Tyrant.

Laplace can’t believe that he fled from the hand of the Demon Lord, that thought he got killed. Kazaream comments that Laplace did the right thing by choosing to run away. She reveals that the Demon King was an even match in her prime. Every time Kazream fought Demon Lord Valentine, the damage to their surroundings was immense. Kazream also talked about seven Demon Lord in her ”prime.”

Yuuki wonders what Demon Lord Valentine was doing at church. Kazream replies that Valentine sees humans and demihumans as no more than food. If such a man is claiming to be the guardian of humanity, there must be something going on. Yuuki compliments Laplace that he dug helpful information. Yuuki decided that he would like to investigate the Western Holy Church further, but if Demon Lord  Valentine is there, it means they have to be more careful. Laplace wonders if they should lure the Demon Lord.

Laplace talked about Clayman, Demon Lord Milimi, and Demon Lord Frey and that they can have all of them. Meanwhile, at the Tempest, they had a meeting between humans and monsters. The Armed nation of Dwargon, King Gazel Dwargo, is also part of the meeting. Veldora arrives and apologizes for delaying the process. Gazel and the others realize that this guy is the feared Storm Dragon Veldora. They talked about Westen Holy Church and settled the debate.

Also Read: Penguindrum Anime Movie Announcement: Here is What You Need To Know

Also Read: Preview: That Time I Got Reincarnated As A Slime-Season 2 Part 2 Episode 14.

Tags: That Time I Got Reincarnated as a Slime Season 2 Part 2
ShareTweetShareSharePinSend
Previous Post

Josee, the Tiger and the Fish Anime Movie Review