Preview: That Time I Got Reincarnated as a Slime Season 2 Episode 9 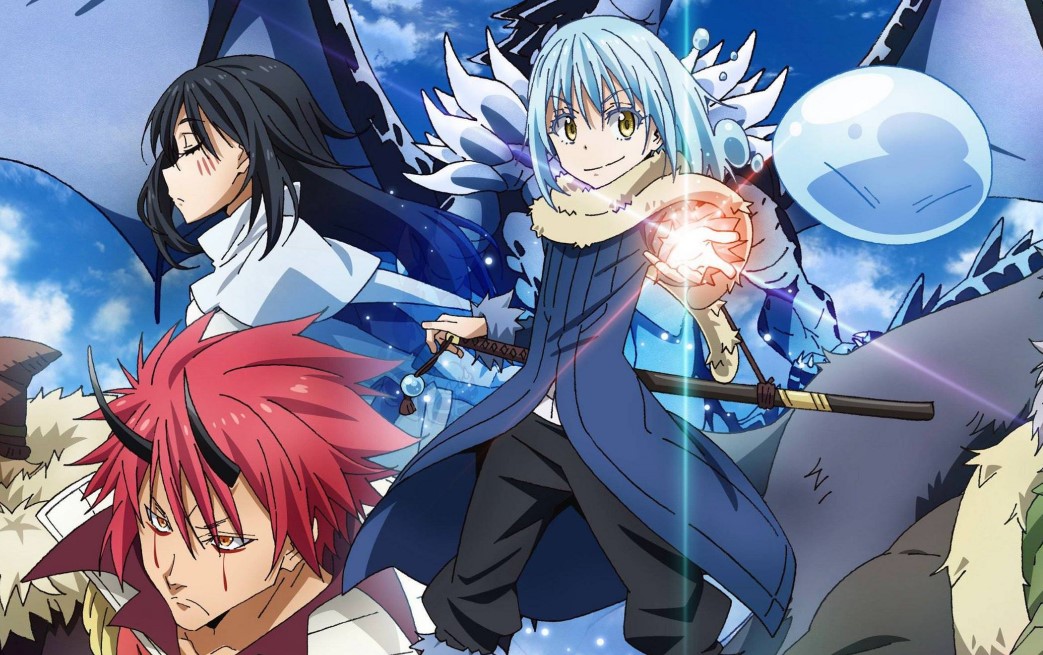 We are about to conclude part one of That Time I Got Reincarnated as a Slime Season 2. Part two will hit soon, around winter. Let’s see what is happening at the Tempest. Rimuru is back, and he finds that the person responsible for the barriers is Myulan. They both head to the meeting room to talk about the chaos that happened on the Tempest. Myulan reveals that she is working for the Demon Lord Clayman.

She reveals that Clayman controls his subordinates’ actions, and she is one of them. Myulan is given a task to investigate Tempest as a spy. She uses Youm to infiltrate the Tempest, and according to Clayman’s orders, she used the great magic spell, Anti-Area. Clayman took her heart with his secret art, Marionette Heart.

Myulan continues to explain that ever since her heart was taken, she keeps on following his orders. Myulan’s only means of survival has been to obey him. Rimuru comments that it means Clayman is holding the key to Myulan’s life. He asks Myulan what made Clayman want to mess with him. Myulan replies that Clayman only told her that great war will break soon. She thought he was referring to Demon Lords Milim and Carrion.

But he was meant that he was starting a war between Tempest and the Kindom of Falmuth. Rimuru realizes that Clayman is using other nations to start a war to avoid getting his hands dirty. He looked at Myulan and he concludes to appears to be a wizard. In the Anti-Magic Area, she is just an ordinary human.

Rimuru is wondering if Myulan is a sacrificial pawn. Youm and Grucius get up and ask Rimuru to forgive Myulan. Youm said she couldn’t defy the Demon Lord Clayman. Rimuru reveals that he will put Myulan’s punishment on hold for now. She will be confined in the reception hall until then. Rigurd said he would assign the guards.

Youm wanted Rimuru not to confine Myulan, but he told him that he is helpless. Rimuru told Youm that if he is not feeling free, he can stay with Youm until they reach the final decision. Myulan got taken away, and Rimuru visited the injured ones. He finds that Gobza and Hakurou are still unconscious since their wounds are deep. 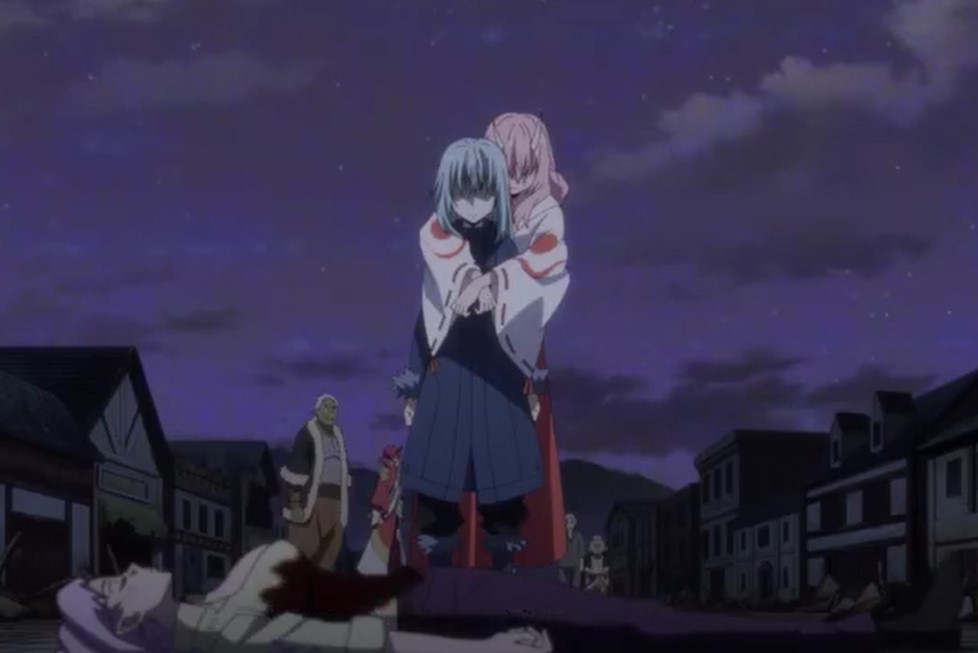 Shuna reveals that the potions are not working since the skills of a spatial nature caused their wounds. She also said her treatment wouldn’t work on them. Suddenly Hakurou waked up and told Rimuru not to worry. Hakurou also said neither he nor the pupil is so weak to die from such wounds as these. Rimuru touches Hakurou’s wound and asks the Great Sage to analyze it. Great Sage reveals that the effect of the spatial technique is confirmed.

Great Sage asks Rimuru if he would like to Predate the effect using Gluttony. Rimuru agrees, and the wound heals instantly. Gobza wakes up and comments that he is saved. Hakurou comments that Rimuru has done it again, and Gobta is glad to see Rimuru. Gobta said, that old geezer are you okay. Hakurou draws his sword and asks Gobta if he wants to sleep again. Gobta changes his statement, and he said, master, are you okay.

Rimuru and the other laugh that Hakurou doesn’t want to be called an old geezer. He asks where Shion is, and she must not have gone to take revenge by herself. Rimuru is surprised since no one answered him and the guy bow their heads. Benimaru told Rimuru to just follow him, and they arrive at the scene where other deceased are. Gobta finds that Gobzo has passed away. Benimaru unwraps the vail that was covering Shion. Beanimaru reveals that Shion died trying to protect the small kid. 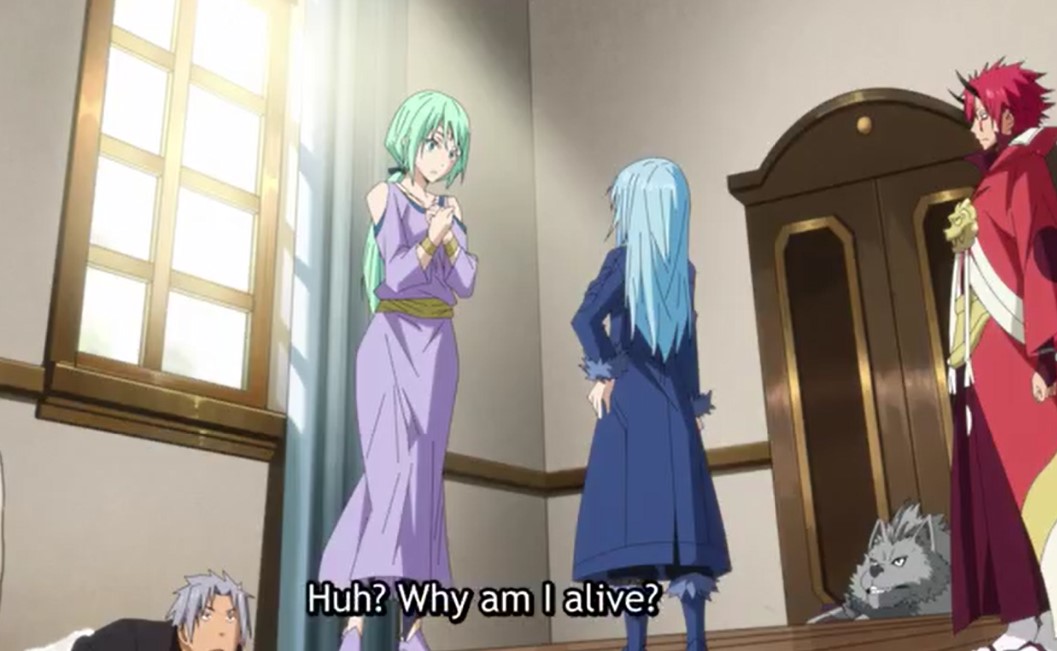 Shuna reveals that Gobzo died trying to protect her. Rimuru started to get angry, and his powers rise, but he managed to calm down. He told others that he wants to be alone. Rimuru wonders why he got involved with humans since his nation has lost its loved ones. But Rimuru’s friend came and told him that there is a fairytale about bringing the dead back to life. Rimuru thinks that they are giving him high hopes.

He asks Eren to tell him more about it and hopes it will work, and he will bring Shuna and other monsters. Souei finds that the Western Holy Church’s forces are cramped around the city on all sides. He communicates with Rimuru and informs him about the situation. Later Rimuru reveals that he has decided that Myulan has to die. Youm can’t agree with the decision. Myulan kissed Youm and told him that she is the first man she falls in love with.

Myulan accepted her punishment. Rimuru killed Myulan in front of Youmu, who cried. He comments that it worked and said he didn’t kill Myulan. She died for 3 seconds and waked up. Myulan’s heart started functioning, and Rimuru told her that Clayman would never hurt her. He told her that she would help him revived Shiona and other dead monsters, and she agrees. Rimuru said he is going to wipe out the Falmuth Kingdom, and Youm will become the king there.

We will find how Myulan will revive the dead and how he will wipe out the Falmuth Kingdom next week. Make sure not to miss the last three episodes.

Tags: That Time I got Reincarnated as a Slime Season 2
ShareTweetShareSharePinSend
Previous Post

Crazy About Her Review: A Well Balanced Dramedy