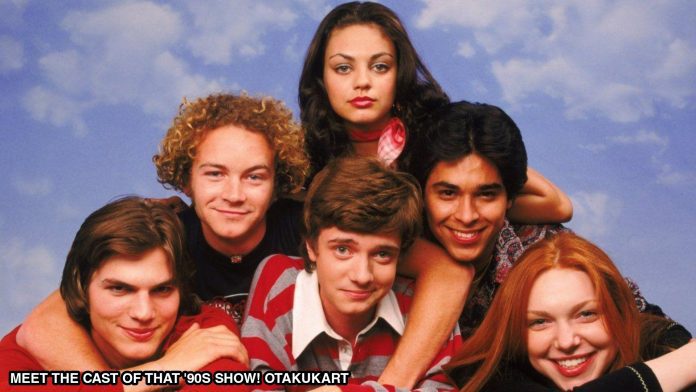 That ’90s Show is a very popular comedy sitcom that will soon premiere in 2022. Fans around the world are pretty excited to know more about the characters and to meet the cast of the That ’90s Show. Since many of them will reprise their roles from the previously premiered series – That ’70s Show. Moreover, the previous one was officially aired by Fox, and now this one is set to hit the screens through Netflix. Little did you know that the previous season brought a very different vibe to our watch list.

And guess what? The story surrounds the life of six different individuals. It’s good to see how their life interconnects with each other at one point. Well, fans are curious to meet the cast of That ’90s Show. However, there are numerous speculations according to which this show will have 10 episodes to watch, whereas the previous one had eight seasons. Moreover, only five of the previous cast members will join, as Danny Masterson won’t be returning because he has been called out for a rape case. Since fans are looking forward to knowing more about the actors, let’s take a look at them!

Well, when it comes to this show, viewers were always more interested in the characters of this sitcom. Since they were the main spark of this series. Moreover, this show highlighted a version of the Teen drama. And at that point, teens were more enthusiastic about this show because many of them could highly relate to the things that were featured in the series. And the main reason behind loving all the characters would is their identities. None of them is identical to each other. The creators made sure that every character had its persona and charm.

Well, Mila’s role as Jackie became one of the most loved characters in the show. She quickly rose to prominence with her acting skills. Even though she was egocentric in the show, people liked her way of reflecting Jackie’s personality as a rich and arrogant girl. Many people related to her character. Her main trait would be providing unnecessary information. But guess what? Her opinion always worked in the end. Well, Mila Kunis is a very popular American actress who has been a part of many popular movies and TV shows like Black Swan and The Family Guy.

Ashton Kutcher was one of the main characters in That ’70s Show. Moreover, he is way too iconic. Throughout the whole show, he is known to be the pretty boy! His looks were his main agenda. And people easily got attracted to him because of his features. Moreover, he was always proud of his beauty and charm. Even though he is the oldest of all in the group, his mind doesn’t work like that! People often categorized him as a dumb boy! Perhaps he is just curious and gullible. On the other hand, Ashton Kutcher and Mila Kunis are a couple, and they’ve been together for decades!

Also Read: Meet The Cast Of The 7 Lives of Lea

Well, who doesn’t know Topher! Everybody remembers him as Eddie Brock from Spiderman 3. He rose to prominence with his roles in popular sitcoms, and with his character as Eric, he became super famous! He is also a leading character in the show. Throughout the whole show, fans loved his character for being the smartest! Whenever they’re stuck in different problems, Eric’s plan would often save them. But this didn’t work out all the time. His clumsy nature often made him different, but still, he was quick with his decisions.

Well, Laura Prepon rose to prominence with this role! And the main reason behind this was her bright red hair. Coming back to her character, you will realize that Donna is very clever and often stands ahead in every aspect. Her main advantage was her strong mind. Moreover, there are times when her confidence would turn into over-confidence, and this often resulted in hurtful phrases. Over these years, Laura became popular for her roles in popular movies and dramas like The Girl on the Train and Southlander.

Wilder Valderrama is a popular American actor. He portrayed the role of Fez in the popular sitcom. And throughout the show, he was known to be the boy with an accent. Moreover, his character is very fun-loving and interesting. Another interesting part about him in this show would be his origin. None of the characters knew his actual birthplace and his name! Well, his name was too difficult to remember. Moreover, the viewers were also unaware of these things. Over these years, Wilder became a part of popular projects like NCIS and Encanto.