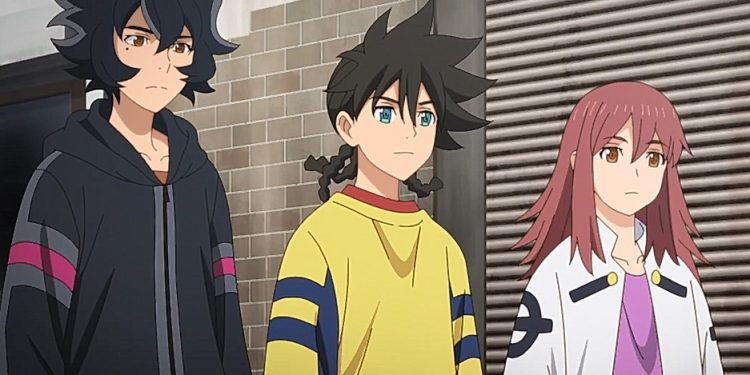 AMAIM Warrior at the Borderline

AMAIM Warrior at the Borderline Episode 10 reveals Tezuko’s past where he witnessed AMAIM called Ghost killing his father. Tezuko wonders if he has been choosing the wrong path. He realizes that due to his childish behavior, his father lost his life in Ghost’s hands. He still believes that he is responsible for his father’s death even though his father was the one who went out without his AMAIM and got killed by Ghost. AMAIM Warrior at the Borderline reveals endless battles between the Resistance and Japan’s military army.

Tezuko recalls everything that has happened during the battle and realizes that they even failed to capture Ghost the day they battle him. He wonders if he is the one to blame. In the morning, Tezuko, Shion, and Amou met with a guy who told them about using the next truck to arrive at the HQ. They talk about the shopping suppliers, and Tezuko explains everything that he knows. The guy in the suit arrives and seems to know Tezuko, and Tezuko realizes that it is Yuu. They had to the park to enjoy their reunion.

Tezuko realizes that he failed to recognize Yuu since he was wearing a suit; Shion wonders if Yuu is Tezuko’s big brother. But Amou knows that Tezuko never talks about his brother with him. Kai reveals that the guy’s full name is Suenaga Yuusei, who stayed with his parent at Yataragasu in the past. But Yuu lost his parents during the battle against the Asian military. Tezuko considers Yuu as his big brother since Tezuko’s father took care of Yuu before he died. Yuu and Tezuko grew together from childhood, and Tezuko calls him brother to never feel lonely.

Previously on AMAIM Warrior at the Borderline Episode 9

Kai also reveals that Yuu left three years ago without telling anyone. Yuu and Tezuko are sitting on the other side, talking about the past. They also talked about how they used to play with each other. Yuu checks the time and realizes that he has meetings and exchanges his number with Tezuko. The two decided that they would organize and have a meal together. The trio returns to the HQ, and the boss asks if something happened when he was not around. Tezuko reveals his encounter with Yuu. The boss wishes he could have seen Yuu wearing a suit.

Tezuko realizes that he recognizes Yuu as his brother even though they are not related by blood. The next day Tezuko and the others went training and impressed everyone. Tezuko wields his AMAIM and talks about the weapons that it lacks. The engineers told him that they would adjust his AMAIM. Kai reminds Tezuko that he has a message from Yuu, and Tezuko realizes that it is that time. Tezuko headed out with Amou and Shion and met with Yuu, who is driving a luxurious car. He took them to the town to enjoy delicious Japanese food.

AMAIM Warrior at the Borderline Episode 10 will be released on 7 December 2021. Yuu reveals that he is the mayor of the city, and when they pass near the citizens, they thank Yuu for his work and for helping them the other day. Later Tezuko met with a guy who claims that Yuu is an Asian military spy. Yuusei met with Tezuko and his boss and explained his part, but Tezuko caught him and pointed a gun at him. Let’s look at AMAIM Warrior at the Borderline Episode 10 official details.

Also Read: The End of Dai vs. Dark King Vearn In Episode 60 of Dragon Quest: The Adventure of Dai.