James, Thomas and Shae fail to come to agreement on an important decision while accusations are made in the camp in Y: 1883 Season 1 Episode 3. 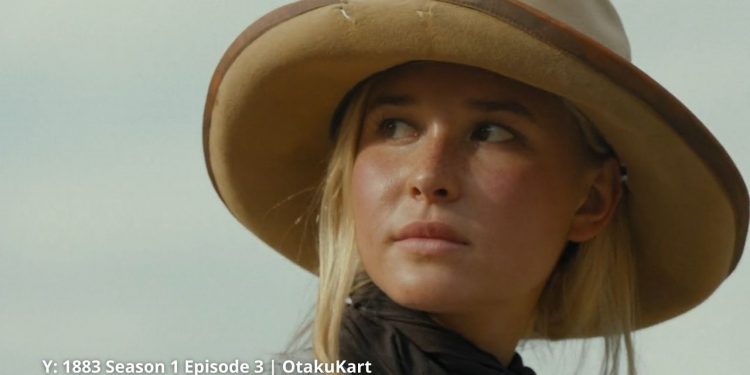 Y: 1883 Season 1 Episode 3 continues James, Thomas, and Shae’s journey to take the immigrants traveling after leaving the town. Concerns about how they will handle themselves, language barriers, food, and threats looming around continue to grow. This may also see the leaders on a different page as well. Furthermore, we are also watching how James’ daughter Elsa learns the ways around here as well. We also might be looking forward to a conflict among the camp after they faced an outside threat recently.

Yes, while James, Thomas, Shae, and Elsa were away, a group of Hooligans ended up crossing paths with the camp by the river. All they wanted was the water and didn’t see the harm as there were immigrants and no one to stop them from doing so. As they tried to force their way, some of the camp members retaliated that didn’t end well for anyone. People died with the camp destroyed. This left no choice for James, Thomas, and Shae to make these bandits pay for what they did.

Previously on Y: 1883, we saw Shea Brennan bidding adieu to his last remaining family who was suffering from smallpox. After burning down his house, he joined Thomas as they see James Dutton taking down a gang. While James is looking forward to uniting with his family again, Shea and Thomas had plans of taking a group of Strangers to Oregon. Before they could do that, there are a number of things these people need to learn. They cannot carry firearms and on top of that communication problems.

James reunited with his family that included his wife Margaret, his son John and the most adventurous Elsa. She soon realizes the dangers looming around her when she is attacked at night by a drunk before her father took him out. Meanwhile, Thomas believes waiting will only make the journey difficult. Shea begins preparing his people for the journey and is also concerned about smallpox continuing to grow.

The second episode saw Elsa being there for everyone and trying to help in every way she can. The only problem is her aunt Claire who manages to find a way to criticize her. Meanwhile, the other cowboys look for pets that can aid them during their travel. Threats come in the form of Hooligans who try to take over the river. Claire fighting back brings bigger chaos and this even leads to shots firing leaving some of the people dead including Claire’s daughter.

James, Thomas, and Shae return to see the chaos that broke out. Shae insists on going to town and meeting the Marshall. From there on, they will hunt these bandits themselves. Before leaving, James advises Shae to sleep with a rifle. Josef points the bandits out and before they could answer Marshall’s questions, shots are fired and every other bandit is dead. The episode comes to a close with Claire committing suicide and the group is left with no option but to leave before men from town come hunting them down.

Y: 1883 Season 1 Episode 3 is releasing on 26 December 2021. It is titled, “River”. The official synopsis of the episode suggests an important decision leaves James, Shae, and Thomas divided. Meanwhile, things get tense in the camp as there are accusations made among themselves. Elsa starts flirting with a cowboy and we believe it’s none other than Ennis. Especially the fact that he did try to flirt with her in the previous episode before realizing she is too pretty for him.