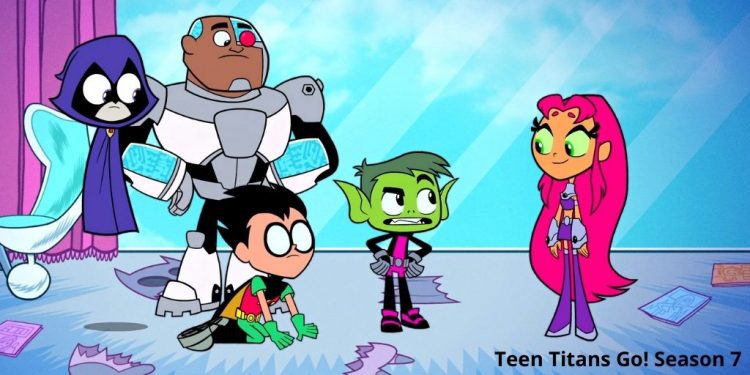 Yet another episode from the store of the popular American animated tv show arrived and gave the fans a dose of nostalgia. It was the time for the Titans to play hide and seek. However, Robin’s plan to convince the team of playing the game came with some other motives. He had recently learned a new trick from Batman, and he wanted to show them off through the game. Meanwhile, Starfire was quite excited about the game as it reminded her of her planet Tamaran.

The DC animated show has gained quite a number of fans since it first came out on 23rd April 2013. However, the major reason behind the success is the characters of the show. The show features some of the most popular and loved characters from the DC comics. In addition to that, these characters join forces to form one of the most popular teams in all of DC comics as well after the Justice League. Other than that, the show has taken its inspiration from the original show titled “Teen Titans” that aired between 2003 to 2006.

It was a huge hit at the time, but “Teen Titans Go!” does not serve any continuity to it. The well-known American tv writers and animators Michael Jelenic and Aaron Horvath have jointly developed the show. The show has continued its success with the ongoing seventh season as well, which kicked off on 8th January 2021. However, we have come a long way in the season, and the fans are waiting to watch Teen Titans Go! Season 7 Episode 31. But first, let’s take a look at the events of the previous episode and find out what all went down.

Episode 30 of Teen Titans Go! Season 7 came out on 27th November 2021. Furthermore, the episode was titled “Glunkakakakah”. The episode began with Robin hiding in plain sight as his Titan friends were relaxing on the couch. However, he gave them an element of surprise when he demonstrated the art of concealment. It was a new trick Batman had taught him, and he wanted to teach them as well. Although they were not at all interested and had rather planned a relaxing day. But Robin convinced them to play hide and seek instead, which excited everyone.

Whereas Robin’s plan was to teach everyone the art of concealment through the game. On the other hand, Starfire asked what was this game about. But when Raven explained the game, Starfire got very much thrilled. It was the exact game she used to play on her planet with her friends, but there it was called “Hunt ‘N Glunkakakakah”. So as the game began, it was time to hide, and Robin had to find everyone. But it was way too easy for him. It was now time for every other member to take turns and find the members. Meanwhile, Robin tried to use his concealment tricks in the game for hiding, but in the end, it all went sideways.

Now it was time for Starfire’s turn, and she went violent with the hunt and played as she used to on her planet Tamaran. She was shouting Glunkakakakah while hunting, and Robin got scared, thinking the term is meant to hunt and kill. However, Glunkakakakah meant to kiss, and he didn’t get one since he had already rejected it before. At last, it was Raven’s turn, and Robin challenged her she won’t be able to find them in 100 years. Who knew Robin meant it literally, and 100 years passed away. In the end, Raven found their skeleton’s on the couch, but now it didn’t matter anything.

As we are already halfway through the season, the fans are always looking forward to the next episode. “Teen Titans Go! Season 7 Episode 31 will release on 4th December 2021 at 7:30 pm ET on Cartoon Network.” Moreover, the episode will be titled “Control Freak”. This will be another episode to watch as we might probably see a member of the team trying to control the actions of everyone. However, this will bring along quite a lot of fun and chaos. So stay tuned to find out what goes down.

The ongoing season of the popular DC animated television series has got the fans hooked. Therefore, they are searching about where to watch Teen Titans Go! Season 7? The answer to that question is quite simple. “Teen Titans Go! Season 7 airs at 7:30 pm ET on Cartoon Network in the United States.” Moreover, it usually airs on Saturdays, but there are instances when the channel releases an episode on a different day. Other than that, the viewers can stream the show on Amazon Prime Video as well. Meanwhile, the first five seasons are available to watch on Hulu and Netflix.

Male Kpop Idols Born in December That You Should Know