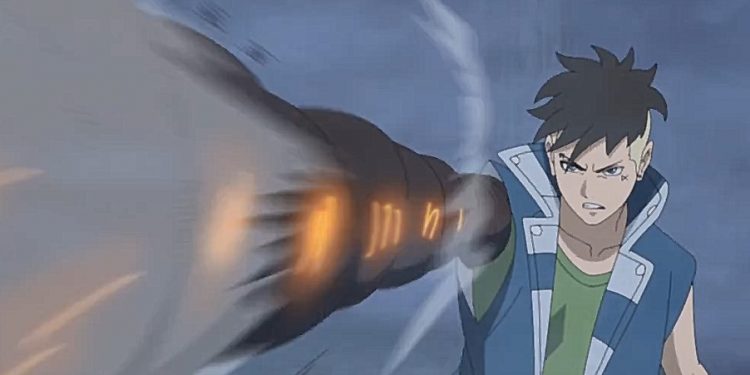 Boruto: Naruto Next Generations Episode 231 reveals the mystery behind the Land of Calm Seas. Chocho successfully helped Kawaki and Shikadai break the Hiden Jutsu: Tree Blood Barrier, but she got wounded. Shikadai decided to return to the village with Chocho and Juju after capturing her. Kawaki and Mozuku chase the other shinobi guy who stole Mozuki’s stuff. Mozuki shows Kawaki the shortcut to the Land of Calm Seas. In the recent episode of Boruto: Naruto Next Generations, Mozuki reminds Kawaki that the Shinobi guy they are chasing is a Feudal Lord’s ANBU member.

He apologizes that he made Kawaki’s team get scattered because of him. Kawaki told Mozuki not to worry while Shikadai helped Chocho. He is worried that they are far from reaching the village. Konohamaru had a meeting with Naruto and Shikamaru about Shinobi killing young boys. They realize that those incidents have continued, and the victims are from the Land of Calm Seas. Naruto realizes that Kawaki and his team escort the boy from the Land of Calm Seas. Shikamaru believes the Kawaki mission is connected to the recent incidents.

Naruto suggests sending reinforcement, and Team 7 is on a mission in that forest. Konohamaru decided to send Team 7 as reinforcement. Mitsuki, Boruto, and Sarada completed their mission and sent those cows back to their owners. Mitsuki met with a messenger and told him about the message for Team 7 from the Hokage’s office. Team 7 has to assist Team 10, and Mitsuki realizes that Boruto was right about those two Shinobi who pass them in the forest. Shikadai met with Sarada and Boruto, who wondered what had happened. Boruto talks about suspicious Shinobi that they saw and decided to come. Mitsuki told them about Kawaki, who went after that Shinobi.

Kawaki and Mozuki block the path of that Shinobi guy who realizes that they have beaten Juju. He told the Shinobi to give him the package, and the Shinobi refused since his boss was waiting for the package. Mozuki can’t believe that someone from the same country is working for an evil boss. He knows that the lives of the citizens are at stake since they need medicine to get cured. The Shinobi guy reveals that a Shinobi carries out the orders from the boss and has no need for emotions. Kawaki realizes they don’ have time to argue and decides to beat the Shinobi.

But the Shinobi uses Ninja Art: Infinite Seas Watchtower that creates a fog, and none of Kawaki’s attacks worked on him. His Clones also appear, and Kawaki realizes that it is annoying to deal with the Clones. Mozuki notices that the Shinobi has Clones that are Genjutsu, and they are untouchable. He tries to release them, but he fails and wonders if they are different from regular Gunjutsu. Shinobi told Kawaki to stop since the fog is water vapor. He also talked about his illusions that are caused by fogs.

Shinobi also dried everything around, and Kawaki began to feel thirsty since the water in his body was also getting drained. He also explained how his Jitsu works and that they will die after losing the water in their bodies. Kawaki realizes that they have to find the natural body. He sends the real one flying but is trapped, and Mozuki black the blade using his chest. Mozuki was protecting Kawaki. Boruto arrives and uses Rasengan to break the second blade. Shikadai captures him using Shadow Jutsu. Kawaki punished the Shinobi guy, and Mozuki died.

Boruto: Naruto Next Generations Episode 231 will be released on 9 January 2022. Kawaki, Boruto, and Shikadai decided to fulfill Mozuki’s last wish. They battle with Pursuers on their way. Boruto told Kawaki to leave, and they will handle the Perseus. Kawaki met with Mozuki’s teacher, but Perseus held a knife on  Mozuki’s teacher. He killed the guy and completed the mission. Let’s look at Boruto: Naruto Next Generations Episode 231 official details.

Also Read: One Piece Episode 1005 Delayed: When is it Coming Now?.