Taste The Nation With Padma Lakshmi is one of the popular shows on Hulu. 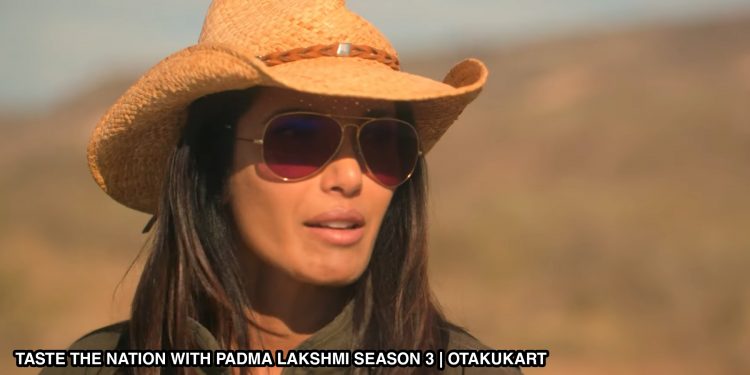 This show just came up recently in 2020. Pandemic took us to a very difficult spot, and amidst all this, shows like this entertain us a lot. Well, Taste the Nation is just like that. It is a food documentary show, which takes us on an adventure, wherein Padma Lakshmi travels to specific places to learn more about their lifestyle and cuisine. Well, it’s good to learn about their culture. Since every country has a divisive tradition and these places are mostly around the United States. The show started airing in June 2020, followed by the second season in August 2020. And now, people are waiting to know about season 3 of Taste The Nation with Padma Lakshmi.

Moreover, her main aim is to inform people about the growing changes in values and norms. She even gives us a glimpse of the people who were responsible for shaping the environment for decades. According to Padma Lakshmi, a lot of changes have taken place during these years, and now the history of American food is completely changed. Moreover, it would be good to see more on season 3 of Taste The Nation with Padma Lakshmi. For most of them, food has been a way to connect their mind to the things and memories that they love.

Who Is Padma Lakshmi?

Padma Lakshmi is a very popular author. Moreover, she rose to prominence as a television personality. Most of her career included her being a host. And guess what? The 51-year-old began hosting different cooking shows in the early 2000s. Moreover, Padma is exceptional for her skills as a television host. She even received several nominations for her hosting abilities. Since this journey began, Padma also started her work as a professional author. Growing up, she dealt with several problems and health issues. But she always spoke up for herself.

Padma was around four years old when she moved to the United States. To keep herself away from all the stress, she began working at a very young age, and this presumably began after she turned 21. Despite facing several issues like bullying and racism, Padma still became the first Indian model in New York City. And she desperately wanted to work so that Padma could pay off her fees. Her confidence made her very outspoken, and through which, she even began concentrating on her life as an activist. Padma’s first show as a host garnered massive attention because it was one of the top-rated shows in 1997.

Also Read: RHOA Season 14: Everything We Know About It

Padma has been a part of this show since early 1991. Moreover, throughout this journey, she came up with four different books. When she began her modeling career, she has worked with many popular designers like Giorgio Armani and Gianni Versace. The reason behind her fanbase would be her way of providing a different angle to the Taste The Nation show. Moreover, there are several other individuals who resonate with her life, and she’s surely an inspiration to many young individuals that are aspiring to make their name in society. Well, it’s pretty good that’s she’s still maintaining her original work patterns.

The first season began with Padma’s trip to El Paso. Throughout the first episode, she moved to different areas and dug deeper into the history of those places. Through which she gets to learn about all the dynamics of these cuisines. And every food made her realize that people are so different in terms of their values. And guess what? With each food, she linked all the possible connections as well. Apart from food, the first season provides the audience with all the necessary information. So to be more precise, you will be able to learn more than food.

To represent our culture, our life gives us several opportunities, and food is one of the best ways to do it. As per Padma, people can easily connect through food. Moreover, Taste The Nation is a must-watch. Because the show comes with a glimpse of beautiful places and it’s really fun to explore them. Well, get ready to see multiple mouth-watering foods throughout the whole show. There are around ten episodes, and each episode is filled with delicious items. Since Padma also belongs to a different country, she resonates with this concept pretty well.

There were things about the history of the United States and several other places like Arizona as well. She explored the timeline before the arrival of Christopher Columbus. Moreover, fans were intrigued to know about the Gullah Geechee community. Well, they belonged to a different country, but they were specifically brought in to change the economic cycle. And guess what? Their knowledge in terms of economy and agriculture helped to change the dynamics of their culture. Most of their food included staple food. Even though the journey has been pretty painful, the older generation didn’t fail to maintain the authenticity of their culture.

When it comes to the second season, Padma highlighted more on the holiday edition of her series. The first season talked about the immigrant communities. The show received most of the popularity through Padma’s confidence and hosting capabilities. She always wanted to maintain her identity as a great host and food critic. Moreover, the second season of Taste the Nation with Padma Lakshmi highlights the intriguing facts about New York’s food and culture. Moreover, the show premiered on November 4, 2020. She traveled to several places like Miami and Cape Cod for Christmas and Thanksgiving.

The whole show is narrated by Padma Lakshmi, and it’s oddly satisfying to have Padma’s voice over these episodes. No matter wherever she was, she made sure that viewers wouldn’t feel uncomfortable. And guess what? Fans would never get a single doubt about her visit. It seems like she has been a part of their culture and family for a very long time. Every time she visited a place, she would cover up every information almost effortlessly. And it was really good to see. And throughout the whole season, she got to learn different things about the history of Thanksgiving.

For this season, Padma wanted to cover the aspects of different cultures and the way people celebrated their holidays across the world. Even though she had to maintain the pandemic restrictions, this didn’t stop Padma from exploring different countries for her show. She made sure that no rule was broken. Over these years, Padma constantly showed all the intricate details that happened around the world. As it genuinely affected the surroundings of several countries. Since this show premieres on Hulu, the channel is popular for releasing popular family-related shows as well. And you can watch them with your family.

Previous seasons of Taste The Nation became popular. And since then, people have been waiting for the premiere of season 3 of Taste The Nation with Padma Lakshmi. People are waiting for the arrival of this season again. They have been waiting to see more about the cuisine culture across the world. Well, speaking of the third season, there isn’t any kind of information yet. Moreover, the creators of this series didn’t confirm anything too. Until then, you can glance over the last two seasons and get to know more about the show since there might be some things that you generally missed.

Moreover, speaking of the previous season, every episode had a unique name since it depicted the holiday season of her show. Since the show had four episodes, every episode had titles like Happy Challah Days, Mojo-ho Christmas, Truth, and the Turkey Tale, and K-Town Countdown. The whole show together had around 14 episodes. And each episode was entertaining for sure. Before appearing in this show, Padma Lakshmi has been pretty popular for many other shows like Top Chef and Padma’s Passport. But Top Chef was one of the main reasons behind Padma’s popularity.

Well speaking of Padma Lakshmi, her acting career began with the popular British-Indian Actress Katrina Kaif. She began her journey in early 2003, and it continued until the year 2014. Since then, she discovered that her real interest lies in hosting. So she directed her complete interest into this part of her career. Moreover, Padma’s experience is exceptional. And we hope that we’ll get to see more about Padma’s Food show.

Bulgasal: Immortal Souls Episode 5: Your Soul Is Mine