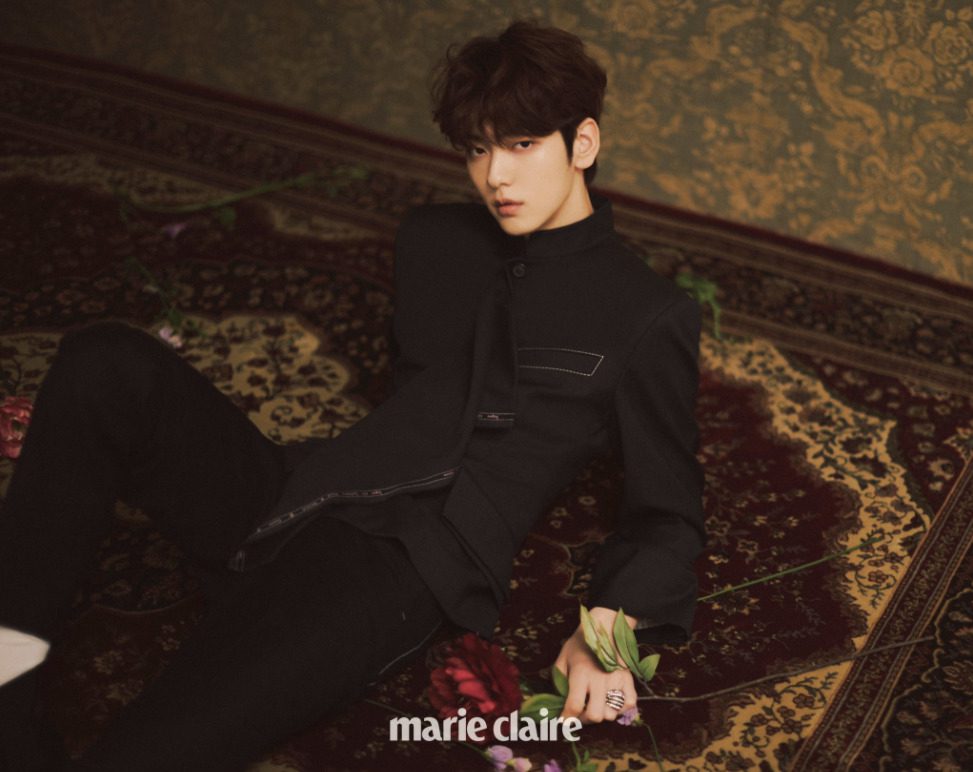 Three years into the k-pop industry, TXT is one of the most successful boy groups out there right now. While the group has been doing wonders in all aspects of their careers, the leader of TXT, Soobin, has earned himself a solo magazine cover. Choi Soobin of TXT became the muse of one of the biggest magazines out there, Marie Claire South Korea. Appearing on the cover for the February issue of the magazine, the idol also marked his first-ever solo pictorial and interview. Worried and nervous on his own, Soobin did miss his members on the interview set. But once the interview began, the idol was back in form.

As we all know, the previous year has been a huge success for TXT. As their second studio album, “The Chaos Chapter: FREEZE,” bagged the title of the No.1 Selling Album in the States. While all their albums debuted Billboard 200 last year. It was their title track “0X1=LOVESONG (I Know I Love You)” that became the first Korean-language song ever to spend over 100 hours at No. 1 on Line Music’s real-time chart in Japan. TXT was in every Music chart we could look at. Talking to the magazine and pop culture giant Marie Claire, Soobin let go of all of his feelings. He’s very proud of himself and the group members. Being able to make their fans happy, he hopes to continue to share more stories with the fandom all over the world.

Soobin Feels TXT Is On The Right Path

With the amazing experience the boy group has with the album sales, Soobin is hoping that their music will continue to sell like this. And that the fans will keep finding comfort in their music. The leader still sometimes finds it hard to believe TXT’s global popularity. Ever since their debut, the group hasn’t been able to go on tours. So the group being popular outside South Korea does make it hard to believe for Soobin. But the results they’ve achieved till now make the leader more confident. This makes him believe that he and the group are on the right path. As we know, “The Chaos Chapter” has helped TXT evolve and showcase something new as the boys have given out some amazing beats, choreographies, music videos, and a lot more.

The fans have been able to see their most genuine and unique color as TOMORROW X TOGETHER, according to Soobin. In a previous interview, the group talked about their chart-topping songs. Their songs tell stories of the desire to become a heroic ‘lover,’ a yearning to change life’s circumstances, reducing oneself and the lover from the world, and a lot more things we can relate to. The journey started with ‘The Dream Chapter,’ telling the stories about different friendships and growing up. And leveled up with ‘The Chaos Chapter: Freeze’, telling the story of a boy who felt ‘frozen’ within this unfamiliar and very real, ‘non-dream’ world. Moving to the next step, ‘The Chaos Chapter: Fight Or Escape’ tells the story of how this boy now refuses to stay ‘frozen’ amidst this chaos.

Earlier this month, the boys of TXT also went on to make their personal Instagram accounts. While fans were happy they’d be getting live updates from their idols, they noticed at Soobin was missing. As the fans went on to ask the idol of Weverse, the idol revealed that he wouldn’t be making his private Instagram account as he’s lazy to make one. While the company has given the idols permission to make their private accounts on the social media site, the idols should have specific content that they want to create and post on their accounts. While some fans are hoping Soobin would join Instagram along with the other members, many of them understand how tiring this can be for the idol, considering they already have two platforms to create and post content on.

Also Read: All About TXT And Their Siblings – Complete Profile