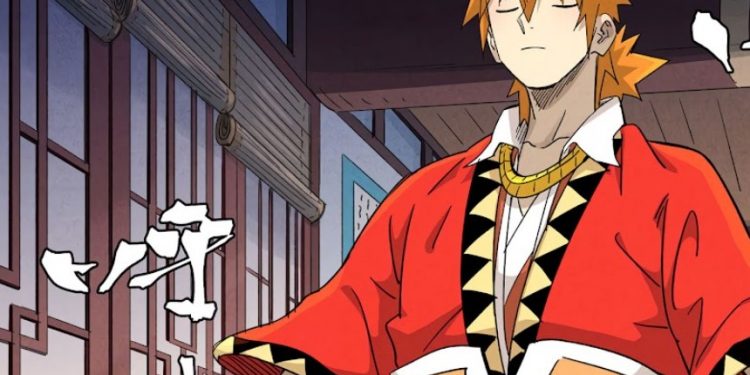 Tales Of Demons And Gods Chapter 361

Tales Of Demons And Gods Chapter 361 reveals Long Yuyin’s Blood Dragon Bloodline after the Dao Realm War near the Deity Lake. The Dao Realm War took days to end, and Nie Li and his subordinates overwhelmed the horde of the red dragon army that wanted to acquire the Deity Lake.  After the war, Nie Li and Long Yuyin arrive at his home in the evening, and Nie Li realizes that Yuyin was hurt and her back is in pain. Yuyin was shy since she was not used to being with a man alone in the house.

Nie Li drew three needles and noticed that Yuyin was shaking. Tales Of-Demons-And Gods’ latest chapter reveals Nie Li witnessing Yuyin taking her clothes off, but he told her not to get naked since it would be weird. Nie Li told her that he wanted to see the place where there was a pain but not her entire naked body. Yuyin tie her long pink hair up, preparing to be get treated.  Niel Li asked her if she would handle the pain, and Yuyin told him to start.

But he reminds her that it will be painful, and Yuyin reveals that the Blood Dragon Bloodline runs on her, and that would be nothing because even an ultimate weapon will never make her feel pain. Nie Li is excited to hear that since he thought she was those sly queens who will scream when someone touches them. He held three healing needles, pierced Yuyin’s back with a single handle technique. He put them one after another, and the healing fluid runs within her veins. Yuyin realizes that it stung a little bit, and she has to be brave in front of her master to be.

Nie Li noticed that she moved and wonders if she felt the pain. He noticed that she pulled her chest up when a needle touched her. He told her to remain like that, and Yuyin reveals how strong her bloodline is. That impressed Nie Li since he has learned something about Blood Dragon Bloodline. Nie Li notices that Yuyin is acting brave and tells her that he pierced her with the first needle, two more remain.

Yuyin pretends she didn’t hear anything and holds herself together when he uses the second needle. But she was sweating. Nie Li reveals that he treated all the vital spots, including the meridians, with the Golden Needle. He talks about her Blood Dragon Lineage, believing that it will activate soon, reach into her meridians. Yuyin accepts that, and Nie Li told her about concentrating on cultivating. He treated her will all the needles and decided to leave since he was sleepy. He closed the door and bumped into a strange guy who almost scared him. Nie Li realizes that he wasn’t expecting anyone and the technique he possesses since he fails to notice someone in front of him.

The guy shows him an angry face, and Nie Li wonders something has happened. He believes that they would have killed that guy in the outside world. The guy reveals about Ninger and that Nie Li is unworthy of her since he believes no one does such things. Nie Li notices that the guy is sad for Ninger and wonders if he has wronged them. He wonders if the matter is related to Long Yuyin. The guy told him he knew everything and left without telling Nie Li the whole story. Nie Li talks alone and wonders why that guy is angry.

Tales Of Demons And Gods Chapter 361 will be released on 10 January 2022. He wonders if Ninger is okay. He thinks about the past and concludes that  Ninger could be his wife and believes Xia Yu misunderstood his relationship with Long Yuyin. Nie Li realizes that nothing happened; he was healing Long Yuyin. Nie Lie heads to visit Long Yuyin since he realizes that he must tell her something. Let’s look at Tales Of Demons And Gods Chapter 361 official details.

You will be able to read Tales Of Demons And Gods Chapter 361 on Tales Of-Demons-And Gods’ official website: tales of demons and gods. Nie Li believes that Long Yuyi’s Blood Dragon Bloodline is activated, and the aura reveals that Long Yuyin is 5-Fate. He also thought about Yuyin’s future. Let’s meet when Tales Of Demons And Gods Chapter 361 is released.

Will Hulu’s The Great Season 3 Happen?