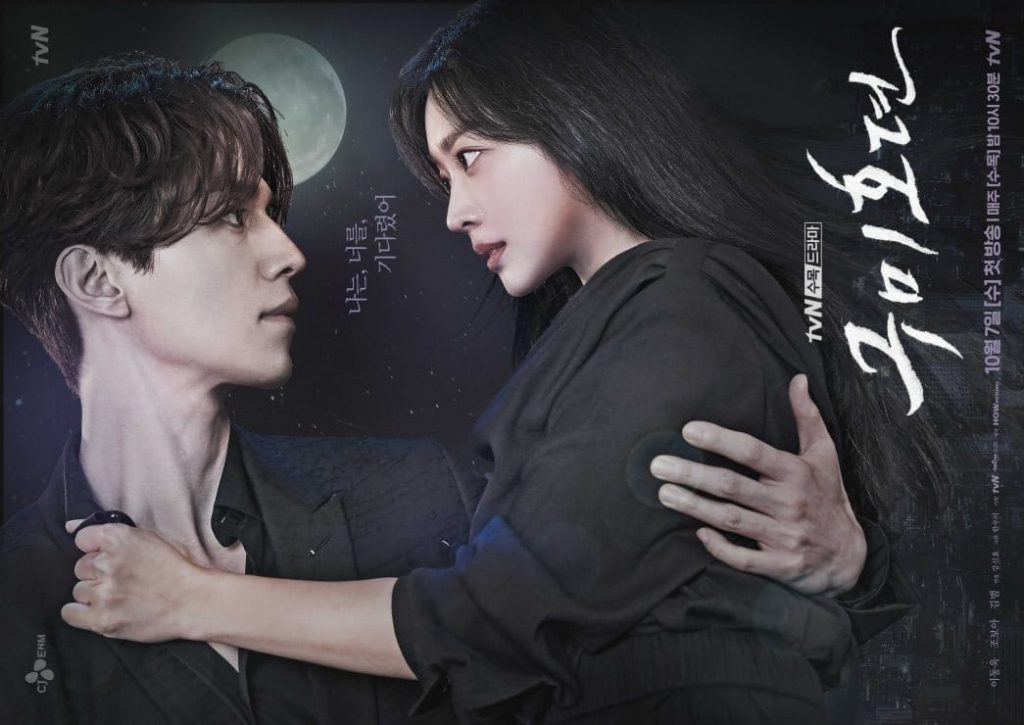 Cast Lee Dong-Wook and Jo Bo-Ah in the Tale of the Nine Tailed (Credit: tvN)

Korean Drama Tale of the Nine Tailed is a must-watch for those who love legends and folklore. The drama Lee Dong Wook, Kim Bum, and Jo Bo Ah in the leading role. The Tale of the Nine-Tailed is worth watching with, full of mysteries, mythological creatures, action, romance, and bromance. The series portrayed the story of an ex-mountain spirit and a powerful gumiho, Lee Yeon, that lives in the human world. He eradicates the evils that exist among human beings while also searching for his reincarnated lover.

Studio Dragon is the creator of the drama, with Han Woo-Ri as the scriptwriter. The director of the show is Kang Shin-Hyo and Jo Nam-Hyung. Tale of the Nine Tailed came to an end on December 03, 2020, after running for sixteen episodes. Now, let’s have a look at the plot analysis and review of the drama.

Tale of the Nine Tailed Episode 1 to 8: Recap

The Tale of the Nine Tailed starts with the introduction of the characters. The leading protagonist, Nam Ji Ah, works as a producer of fantasy- supernatural shows. She encountered an incident when she was small that led to her parents missing. Ji-Ah also thinks that supernatural beings do exist among human beings after the incident. The male protagonist, Lee Yeon, is a powerful gumiho that lived for more than nine hundred years. He was also Baekdudaegan’s mountain spirit but left the position for settling in the human world. Lee Yeon is searching for his love, Ah-Reum, for a long time in the hope that she would take rebirth.

Also Read: Use For My Talent Korean Drama: Delayed Again?

Lee Yeon currently works in the Immigration Office of Afterlife situated. He has a troublesome half-brother, Lee Rang that wants to attracts Lee Yeon’s attention and holds deep grudges against him. Lee Yeon, over the centuries, had met many women with the face of Ah-Reum. However, he knew that none of them are the ones he is searching for, and Lee Yeon gave her his unique fox bead before she went to the afterlife. The same will help him to identify her in the rebirth. Lee Yeon met at the same time, Lee Ji Ah, who has the same face as Ah-Reum. At first, he thought, she cannot be Ah-Reum, as he checked her, and she did not have the fox bead.

Lee Ji-Ah also follows Lee Yeon knowing, that something is wrong with him. She came to know about him and sticks to him for, knowing about him more. Later on, Lee Yeon also realizes that Lee Ji-Ah is the reincarnation of Ah-Reum. Moreover, Lee Yeon and Lee Ji-Ah have a tragic past wherein Lee Yeon stabbed Lee Ji-Ah. She also accuses Lee Yeon of stabbing her and utilizing her love for his gains. Ji-Ah had a hard time believing in Lee Yeon and pushes him away. 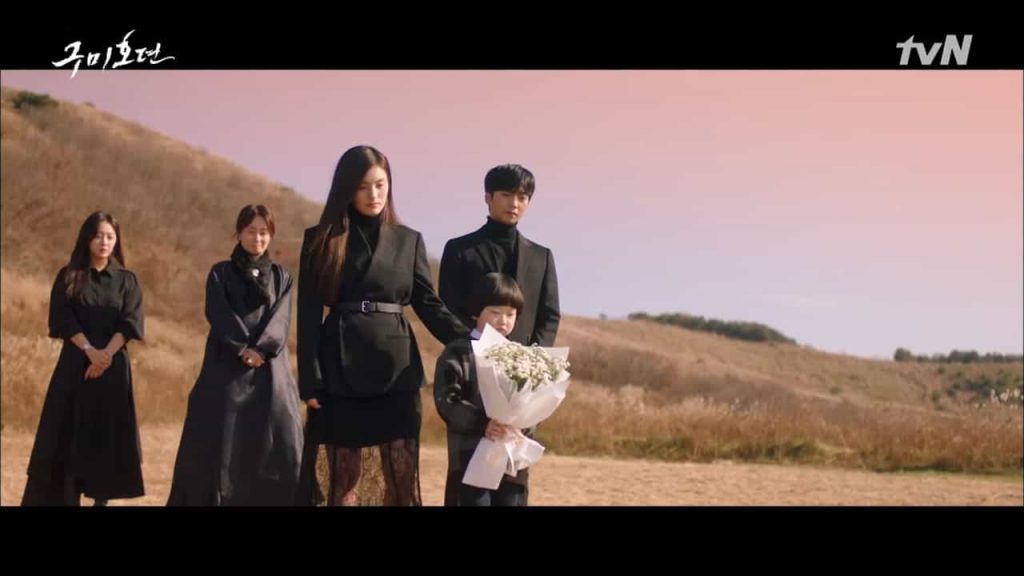 A scene from Episode 16 wherein a funeral is held for Lee Rang after his death (Credit: tvN)

Tale of the Nine Tailed Episode 9 to 16: Recap

Tale of the Nine-Tailed Episode 9 picks from the game of Euduksini wherein both Lee Rang and Ji-ah get trapped in their own greatest fear, Limbo. It was all the work of Imoogi that came back again for conquering the world. However, he needs Ji-Ah to be his bride for completing himself fully. At the finale of Episode 8, Euduksini allows Lee Yeon to save only one person, Lee Ji-Ah or Lee Rang. Lee Yeon chooses his brother for saving when Lee Rang thought that his brother would save his girlfriend again and leave him to die. Yeon successfully saved his brother and got himself trapped in Euduksini’s world.

Lee Yeon does so to meet the Imoogi and also vanquished Eudukshini by luring her into his trap. Ji-Ah and Yeon also reconcile after the incident. Then, the actual backstory behind Ji-ah’s death gets revealed as to how the Imoogi possessed her, and she pleads to Yeon for killing her. CEO Kwon also asks Rang to bring Yeon to them. Ji-Ah also gets the same offer as her parents are kept as hostages by CEO Kwon. The Imoogi also gets into the team of Ji-ah as an internee. Ji-Ah got her parents back but did not understands her connection with the Imoogi.

The Imoogi also reveals that the actual part of him is with Ji-Ah. She also began changing slowly to the dark side. Everyone works together to bring an end to the Imoogi for once and all. Lee Yeon even gave his life for saving killing the Imoogi and saving Ji-Ah. However, Lee Yeon’s death brought grief to everyone. Ji-Ah and Rang began searching for ways to bring him back. At last, Rang gives his life for bringing back Yeon. However, Yeon after, returning, says that he came back as a human. He gets married to Ji-Ah. The series ends with Yeon again going to kill evil spirits with his sword with sparkling eyes.

Tale of the Nine Tailed: Review

Tale of the Nine-Tailed is a romantic action thriller fantasy drama that is based on the urban myth that Gumiho eve exists in today’s world. The reviews and ratings for the series are average. I would like to give a rating of 7 to the story, 7 to the characters, and 6 to cinematography out of 10. The clever writing and strong characters brought success to the Tale of the Nine-Tailed. Several other dramas are very much made on the same concept. However, there are some changes with masterful and simple decorations covered with other myths, mysteries, and suspense.

The romance is the story’s central theme, and the drama also goes on based on the very same theme. Fate set two stars crossed lovers apart. Interestingly, when they met once again after decades are set to be separated again. In just a first few episodes, the two of them met again and fell in love. Moreover, the characters did not contradict or questioned anything that was happening to them but accepted everything that came their way. Ji-Ah was also hell-bent only on finding what happened with her parents.

The bromance set more of an impact on the drama than the romance. On the surface, it looks like that Lee Rang hates his brother and wants to kill him. However, there is a soft corner inside his heart that is yearning for the attention of Yeon. His character took a lot of transition in the drama from being evil to bring his brother back while giving up his life. Well, the supporting actors did provide some comedy in the series. The drama as a whole felt like that everything happened too fast and got over.

Also Read: Will There Be Crash Landing On You Season 2?