Will Tae In let Ga On leave the group or will he help him out? 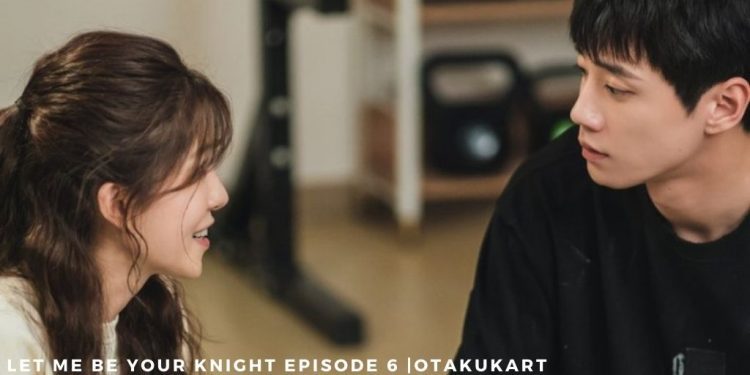 Let Me Be Your Knight Episode 6 is just a few days away. The kdrama has delighted fans with hilarious moments, especially between the two main leads. Just like the audience, Yoon Joo also got scared that Tae In had found out about her true identity, but he actually accepted the lie she came up with. Although the audience clearly knows that Tae In no longer doubts Yoon Joo, she thinks that she hasn’t cleared all of his suspicions. Like someone carrying a big secret, she regrets the moment he finds out that she isn’t Dr.Kang but is Dr.Kang’s twin. But she doesn’t know that Tae In has been trying to figure out whether she is his muse. Whenever he looks at her, his mind starts flowing with inspiration.

However, the problem is he keeps forgetting what the song was, so he keeps looking at Yoon Joo to remember the song. Thus, when he looks at her, Yoon Joo thinks that he’s looking at her out of suspicion. They are sure a hilarious couple! Putting the sweet moments aside, a lot has been going on in In Tae’s bandmates’ lives. Shin has been trying to balance his love life and idol life, while Yoo Chan has been trying to deal with hideous and hateful comments. Woo Yeon is again facing problems which every kdrama second lead does, which is not getting the girl. Lastly and most importantly is the maknae of the group, Ga On, who is accused of bullying.

Don’t miss out on how the members will be getting out of these problems, and check out the release date, streaming details, and predictions for Let Me Be Your Knight Episode 6.

Let Me Be Your Knight Episode 6 Release Date

Undoubtedly, Let Me Be Your Knight has been capturing the hearts of people around the world. And know that the drama is going to complete airing half of its episodes, fans can’t hold their excitement. So, unsurprisingly, the audience of the kdrama has been excited for the 6th episode as well. The release date of Let Me Be Your Knight Episode 6 is December 12, this Sunday.

Honestly, Let Me Be Your Knight has been brightening up the Sundays of the audience. The k-series not only serves the audience with its hilariousness but also with the sweet music. To make things better, the members of LUNA are actually real kpop idols. Through this k-series, the cast of the kdrama has shown how much a kpop idol goes through in their daily life.

Every day is full of hectic hours of practicing, hate comments criticizing them, wrongful accusations thrown at them, and not being able to enjoy the thing they love the most, which is making music. On top of that, they have to deal with anxiety and depression. Nevertheless, they feel enormous happiness when they can make their music freely and are appreciated for bringing joy to the lives of their fans.

Where To Watch Let Me Be Your Knight Ep 6?

Let Me Be Your Knight episode 6 will be no less than a thrilling ride. The audience doesn’t know whether Tae In will push his cold personality aside and help out Ga On. In the trailer for the next episode, when Wo Yeon was trying to stop Ga oN from leaving the group Tae In interfered by saying that if Ga On wants to go just let him go. Maybe, Ga On wasn’t the one who was bullying but was under great pressure. Will Tae In finally realize that not only making songs is important but the people around him are important too? And if he does how will he help Ga On out of this mess? Stay tuned to see what happens next!

Also read: 8 Spectacular IU Kdramas That Prove She Is A Talented Queen

Will Mello Die in Death Note? Everything To Know

How To Scan Pokestop In Pokemon GO?