Will he keep on loving her? 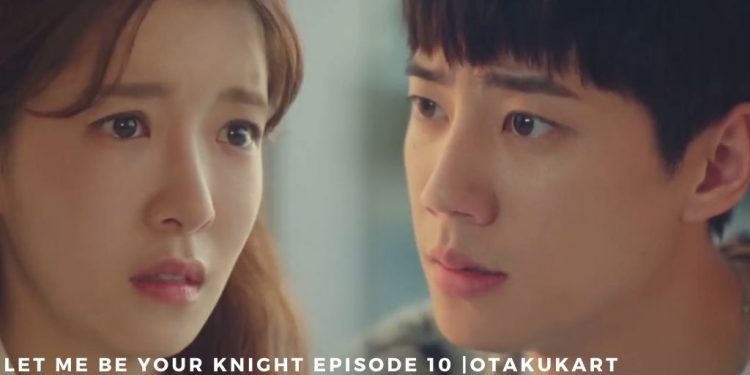 Let Me Be Your Knight Episode 10 is just a few days away. Fans kept getting mood swings throughout the latest episode. Everyone’s heart skipped a beat when Yoon Joo and Tae In had their first kiss. However, Yoon Joo caught herself at the right time and decided that it would be best for both her and Tae In to not date. As she didn’t have enough courage to tell Tae In that she was not Dr.Kang, she told him that he was not her type. The audience couldn’t help but smile over Tae In’s efforts to fit Yoon Joo’s ideal type. Not a single person in the audience could suppress their laughter when he came up with an acrostic poem for Yoon Joo consisting of music notes. He even dressed up in a suit to impress Yoon Joo with his sense of style.

Tae In also took Shin’s advice and tried to be considerate toward Yoon Joo. Because of all this, Yoon Joo met up with her best friend and told her that she likes Tae In but feels like she shouldn’t be dating him because she has been hiding her true identity from Tae In. Her best friend told her that the exact words that Yoon Joo needed to hear! She told Yoon Joo if Tae In really liked Yoon Joo, he would eventually forgive Yoon Joo because of her tough situation. However, Woo Yeon, who saw them together, quickly found out about Yoon Ju’s true identity. But because he likes her, he decided not to tell anyone about it. Like every second lead, he always puts the female lead’s feelings to the front instead of his own.

Don’t miss out on this exciting love story, and check out the release date streaming details and predictions for Let Me Be Your Kight Episode 10.

It looks like one of the fans’ favorite couples from Let Be Your Knight will be in a crisis in Episode 10. Hyo Bin, who had been broken into pieces when Shin rejected her, decided to get back at him. She took a picture of Shin and Chae Ji Yeon hanging out on one of their dates and gave it to the reporters. Of course, that would have caused big havoc for both Shin and Chae Ji Yeon. Not to mention how much hate both of them will be getting for dating each other. Like idol can’t do anything normal? When Chae Ji Yeon is overwhelmed with stress and finds out that news of her and Shin has broken out, Shin helps her out, and the two decide to overcome this problem together.

Plus, maybe this is how the other members of LUNA will be getting closer. Maybe if they had discussed their problems with each other rather than found out through online articles, things would have been much better! Also, Tae In would take inspiration from this and will decide to forgive Yoon Joo. Other than the main romance plot, the audience badly wants to know whether the twins Dr.Kang and Yoon Joo revamp their sisterly friendship. If they do so, fans won’t find anything as wholesome as that!

Let Me Be Your Knight Episode 10 Release Date

Let Me Be Your Knight Episode 10 will be released on 16 December, this Sunday. The drama releases a new episode on Sunday at 11: 05 PM KST. More and more people keep getting mesmerized by the characters of Let Me Be Your Knight. It somehow releases all of the stress bottled up in the audience. Will you be able to find such a good stress reliever anywhere else?

Where To Watch Let Me Be Your Knight Episode 10?

Tags: Let Me Be Your Knight
ShareTweetShareSharePinSend
Previous Post