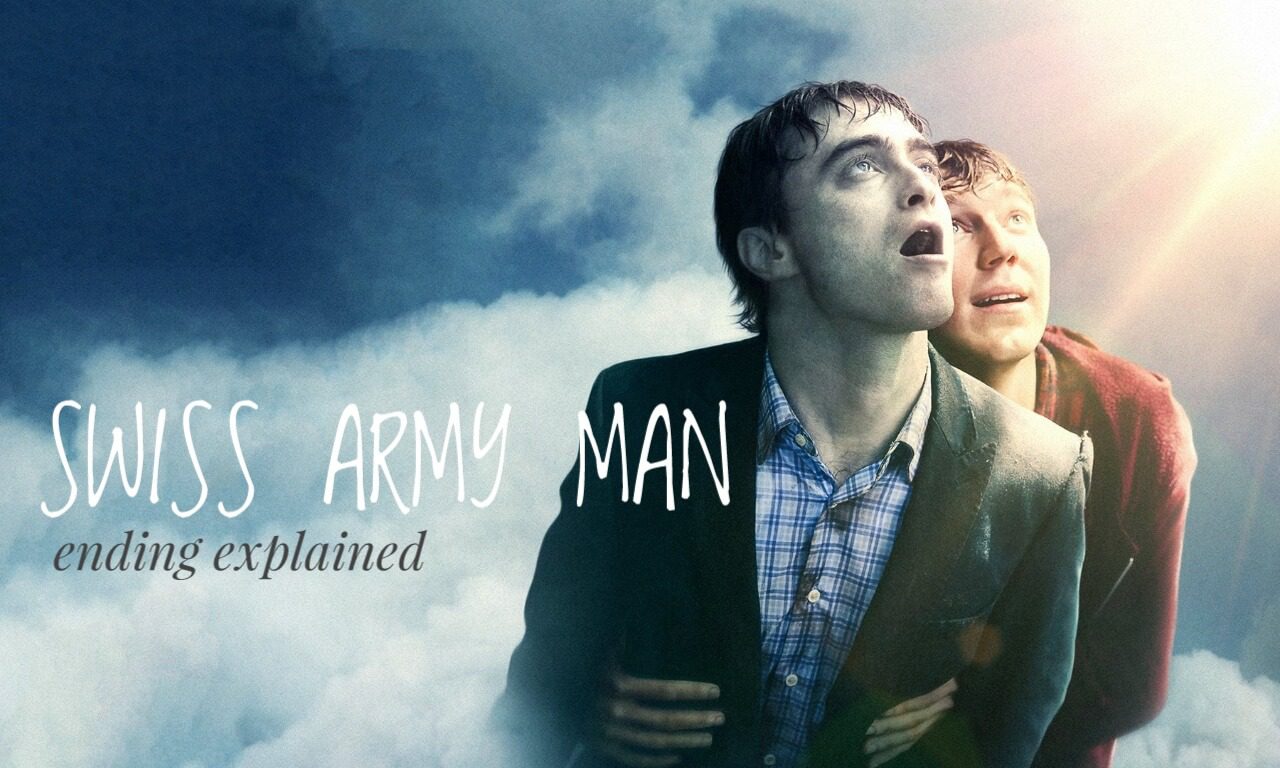 Swiss Army Man starts with Hank Thompson, a man about to commit suicide on an island. As he’s about to hang himself, a corpse washes up ashore on the beach. Thinking it’s a shipwreck survivor, Hank hurries to the corpse. Hank tries resuscitating the body. The corpse responds by spitting out water and ridiculous amounts of flatulence. Hank then discovers the corpse’s ability to propel itself through the sheer thrust of flatulence. The absurdity cranks up to eleven when Hank uses the corpse as a jet ski to ride the waves. With the help of this corpse-jet-ski, Hank reaches a mainland shore, still far from civilization. The following night, Hank and the corpse take refuge inside a cave. When the rainwater fills the corpse’s mouth, Hank realizes it has yet another use of this utilitarian dead body.

He discovers that the corpse can be used as a source of perpetual freshwater supply as well. Meanwhile, the corpse also begins to regain consciousness and beginner-level cognitive capabilities. Hank ascribes a name to the corpse — Manny. The duo resumes their surreal journey and ventures into the forest. Hank uses his Swiss army man —Manny’s erections (of course, he’s capable of that too, get on with it already), like a compass. Manny has started to communicate but has only reached the cognitive stage of a child. That explains his childish sense of humor. He also has no memory of his past life. Hank, who was about to commit suicide a few days ago, takes it upon himself to teach Manny about life. 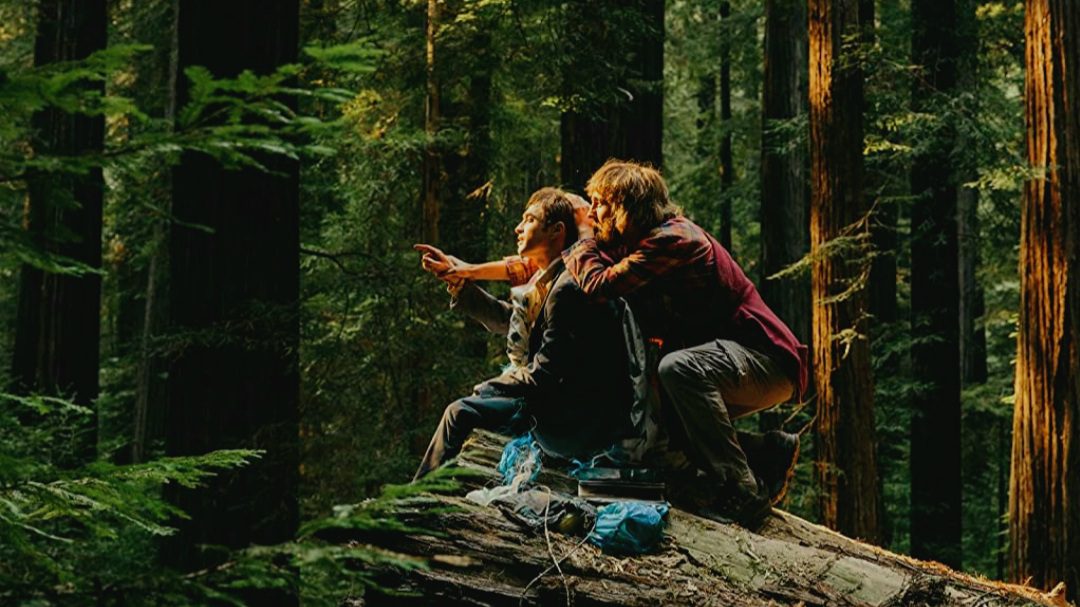 Hank and Manny’s Arc of Friendship, Betrayal, and Friendship Again

He teaches him about several profound concepts — love, life, and what it means to be human. Hank and Manny develop a strong bond and go through different types of relationships. Sometimes they’re a mentor-ward duo; another time, they’re lovers. Using the surrounding flora and trash, Hank constructs several sets. Hank uses these sets to inspire Manny to survive and learn to prize life, which is rather ironic. Hank leads Manny to believe that he was in love with Sarah, a girl that rides the bus every day. Manny gradually starts to fall for Sarah, which motivates him to survive the island with Hank. However, in a twist, we learn that Hank is actually in love with Sarah. He knows her from all the bus rides he has had, with Sarah not knowing about him at all.

That’s because Hank could never gather the courage to strike up a conversation with her. Hank’s phone has Sarah’s photograph set as the wallpaper. He follows Many on social media and learns that she has a kid from a happy marriage. Hank eventually reveals to Manny about his lie regarding Sarah. The dynamic between the two deteriorated, and Manny loses all inspiration to regain life. Meanwhile, Hank has a flashback of his stupidly weird journey with Manny. This makes him think that affecting the mind is one of the weapons in Manny’s arsenal. Shortly afterward, a bear attacks Hank. However, Manny comes to the rescue, despite his falling out with Hank plus the fact that he’s immobile. Manny crawls up to his friend and scares away the bear by igniting his flatulence with the campfire. 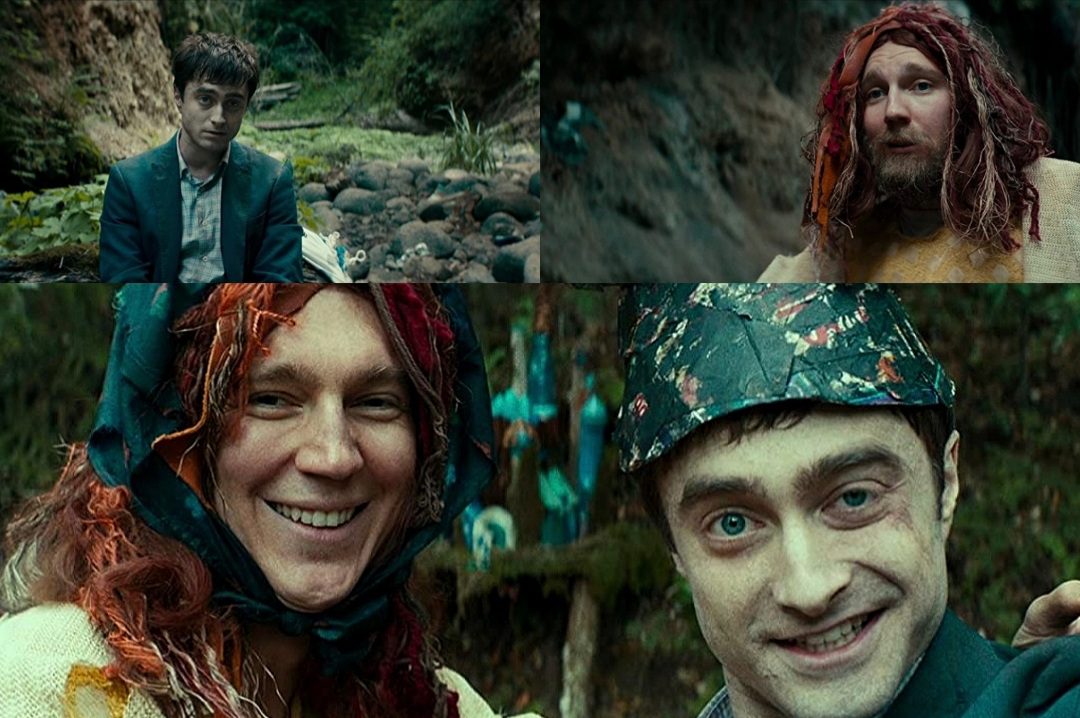 Hank and Manny’s adventures throughout the forest.

At the end of Swiss Army Man, Hank regains consciousness, and he finds that Manny is carrying him to Sarah’s house. Sarah’s daughter sees Manny, who starts talking with her. He shows her many of his weird tricks. However, when his inappropriate compass trick scares the daughter, who starts crying, alerting Sarah. Discovering a disheveled man and a corpse, she makes the only logical decision and calls the police. While Hank receives medical care, the cops get a hold of his phone and see Sarah’s photograph, raising suspicions. Meanwhile, Hank’s father also arrives at the scene. Hank gives an interview to the local TV news, raving about Manny’s magical powers. Following that, he runs away with the corpse to the beach. The cops, Hank’s father, Sarah, her daughter and husband, and reporters all follow him.

On their pursuit, they discover all the different sets Hank had made the past few days. We understand that the remote island we had believed Hank to be stuck in, was in fact, near Sarah’s house. The police corners Hank, who lets out a long fart before they take him away. This is not the end of the surreal turn of events for the people at the beach, though. As the police are taking Hank away, Manny’s corpse starts farting violently. So much so that it moves back into the ocean and swims away like a boat. As Hank and Manny exchange one last smile, the amusingly absurd tale of Swiss Army Man comes to an end. 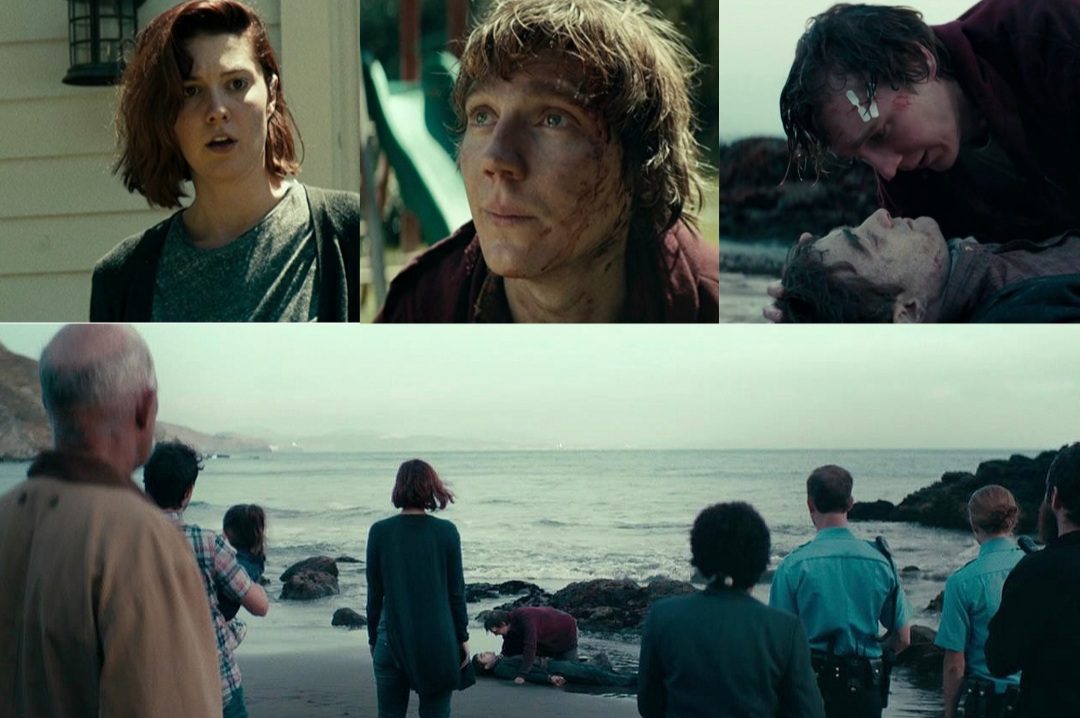 The ending of Swiss Army Man entails a surreal conclusion that’s both hilarious and beautiful in its metaphorical implication.

What is the Significance of the Farts?

Swiss Army Man is a film about the psychological journey of a depressed and socially repressed man. Hank has never been himself, repressing his psyche and emotions because he fears to express them. He loves the girl on the bus but could never muster up the courage to strike a conversation. Part of the fear of expressing himself truly is a shame. That’s why Manny is so integral to his journey to ditch shame and be truly himself. When Hank’s suicide is interrupted by Manny’s dead body, Hank realizes something. He discovers that unlike what he imagined his last minutes to be, there was no flashback of happy moments. No images of partying, being with friends, being truly happy flashed before his eyes. That’s because he never truly lived.

Psychological instability coupled with the trauma of a suicide attempt makes Hank hallucinate all the events that follow. This overtly flatulent corpse of Manny becomes his excuse to convince himself that life is worth living. However, that’s not the only lesson he teaches himself. The multi-purpose corpse also helps Hank come out of his repressed and ashamed shell of a self. But why the farting corpse, though? I think the farts symbolize the normal things that Hank could never do due to his shame and social ineptitude. At the end of Swiss Army Man, he finally rips a big one. It signifies that he’s finally moved on and past his shame. He can now truly express himself. As the farting propels Manny into the ocean, Hank is also ready to move on. 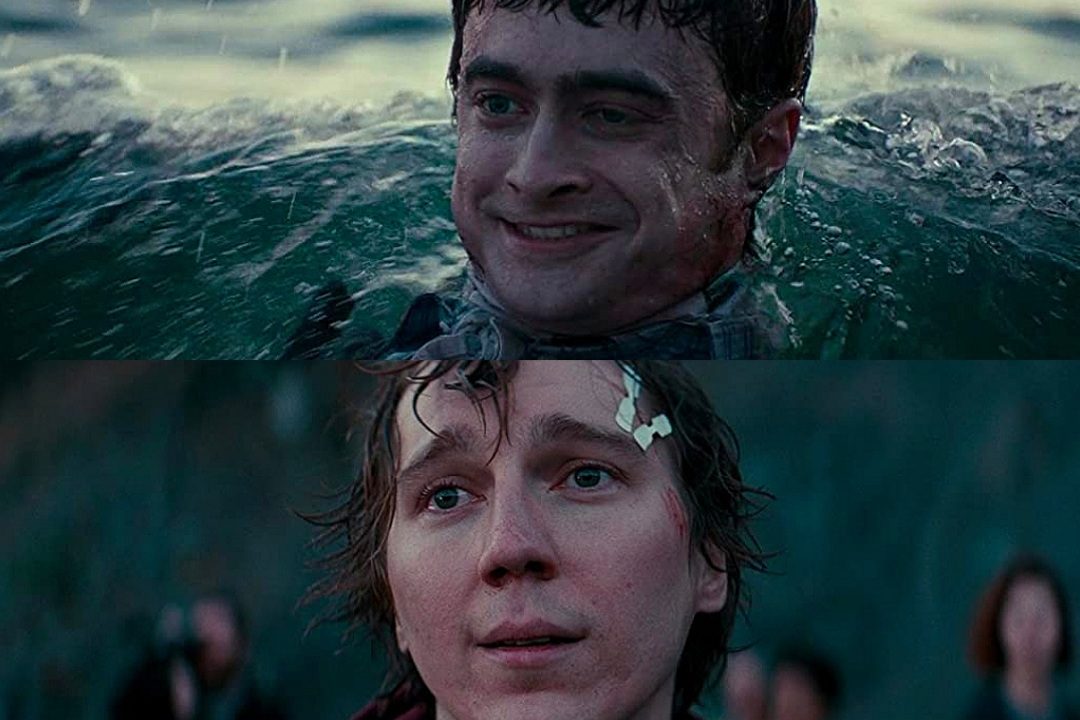