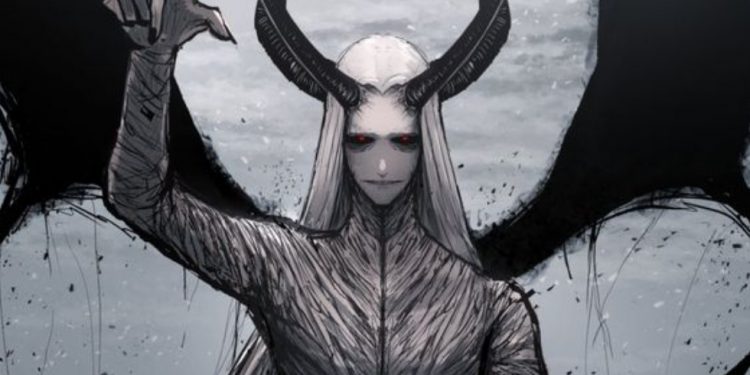 Black Clover Chapter 318 reveals the fall of King of Supreme Devils after the Magic Knights attacks with a killer blow. Asta uses Devil Union: Fourth Sword Demon Slasher against Lucifero to prevent him from getting to the human world. The Magic Knights notice that Lucifero is falling, and they move back. Mimosa and Yuno appear on the other side, and Yuno fires an arrow towards something. In Black Clover’s latest chapter Yuno uses Spirit of Euros to land the killer blow on Lucifero. Asta noticed that and realized that it was his rivalry Yuno. He knows that Yuno will show up in a time like this.

The Ultra Giant Bull is still near Lucifero. Yuno also notices Asta in a Devil Union Mode. Patolli managed to save William, who was falling on the ground. He wonders if William is okay, and Willam calls out Patolli’s name. Langris sees Yuno and realizes that Yuno has arrived and stolen the spotlight since he landed the last blow. Everything around the Spade Kindom Castle begins to collapse, including the Spade Kingdom Castle. Captain Yami land on top of flowers and compliments the Blacks Bulls that they did a great job.

He also calls the idiots when they gather around him, crying since he thought the rain was beginning to pour. The Black Bulls shed tears of happiness and thanks to their Captain for his wise words. Vice-Captain Nacht turns into his human form and realizes that the war is over. Charlotte, Nozel, and Ril are excited to see that the Captains are safe and alive. The Magic Knights begin to gather as they get relieved since no threat can harm them. They know that they have conquered the Devils in the Spade Kingdom.

Outside the Spade Kingdom Castle, the warriors of the Spade Kingdom and the citizens are glad that the war is over and will build another peaceful country. They know that the Devils have been reigning their country for many years, and now they have earned long-lasting freedom. They helped those on the ground while different families reunited with their beloved ones. A mysterious Devil with horns appears behind the citizens and asks them why they celebrate since they have to leave the town. The citizens were shocked to hear that, but they faced the opposite direction and wondered who said that.

Nacht notices that and realizes that it is Supreme Devil from the Second Level. The citizens run away from the Supreme Devil, and Nacht concludes that Lucifero’s manifestation is. But it is yet to get complete. Massive Mana emerges, and everyone wonders what is happening since they know that war is over. A hand pointed at the Magic Knights in that dark magic and told them to bow before him. A new version of Devil appears, and we see Magic Knights on the ground; after that, Devil withdraws his hand back.

It seemed as if they got blown away by the powers of wind from his middle finger. That is how he made them bow before him. Asta notices that from a distance and travel using his Demon Slayer. All the Magic Knights and warriors of Spade Kingdom have been defeated and unconscious on the ground. That mysterious Supreme Devil heard something and wondered who was coming towards him, but he felt that the guy coming had no magic or any powerful spell. Asta arrives at the scene, surprised to see the Magic Knight on the ground.

Black Clover Chapter 318 will be released on 3 January 2022. The manga is delaying Black Clover 318 and returns on that date above. Asta saw a Supreme Devil with four Horns and wondered what had happened. The Supreme Devil looks at Asta and realizes that Asta is the boy who almost destroyed Lucifero before he manifested. He calls Asta the brat who made him not manifest completely. Let’s look at Black-Clover-Chapter 318 official details.

‘Industry’ Ending Explained: How Does The HBO Series end?