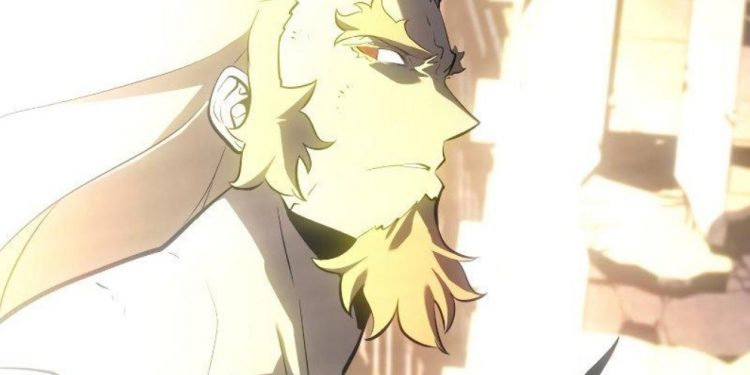 Solo Leveling Season 2 Chapter 179 reveals the mystery behind the Dimensional Crack. S-Rank Hunter Sung Jinwoo has defeated the King of Dragons after summoning the Rulers Army to help him. The Brightest Fragment of Luminosity grant Sung Jinwoo’s wish and give him the Cup of Reincarnation to revive humankind. Sung Jinwoo accepts that he will fight with all Monarchs and monsters inside a closed gate to save humankind. In the recent chapter of Solo Leveling Season 2, Thomas The Goliath, with other Hunters, were surprised to see a massive light coming from Sung Jinwoo’s side.

That light covered the earth, and everything returned to normal. It seems like time has turned back, and everyone is alive. The destroyed buildings have returned to the standard form. In the morning, Jin-Ah’s mother reminds her daughter to wake up Sung Jinwoo. Jin-Ah arrives inside Sung Jinwoo’s room and wakes him up. Sung Jinwoo is at a young age, and Jin-ah is also young. Sung Jinwoo has also followed his sister and was surprised to see his father in the living room. He realizes that the nightmare is over since he is with his family, and they are both healthy.

Sung Jinwoo realizes that he was given the last chance to rewrite everything and set everything right. He decided to spend time with his family and his friends to treasure it as his reward. Sung Jinwoo realizes that the Monarchs are preparing to attack the human world beyond the skies. He hangs out with his friends, plays games, and realizes that he is enjoying his time. Sung Jiwoo wonders if it will be okay to stay for a day and enjoy a peaceful world. His mother continued cleaning at his house and saw a letter on top of the table.

Sung Jinwoo’s mother was surprised to know that he would return after completing his mission. In another dimension, Beru killed a monster after cutting its head. Bellion also joins the battle and fight with a horde of monsters. Sung Jinwoo also appeared potent and realized that he had won the battle against the Monarchs. He encounters the Monarch of the Transfiguration, the pillar of everything, and kills him. Sung Jinwoo has now spent 27 years after entering the Dimensional Crack. He decided to kill all the enemies inside there and then returned to his world.

Sung Jinwoo realizes that the war will be over soon since he has to defeat the Dragon Emperor and The Brigade of Destruction. He is happy that the time inside the Dimensional Crack runs faster than in the human world. He sits on top of the hill after killing his enemies and realizes that only two years have passed in the human world, but in the Dimensional Crack, he will talk about 28 years soon. Sung Jinwoo realizes that it will take him two years to meet with everyone and wonders how his parents are doing.

He knows that when he returns to the human world, his mother will not suffer from any illness, and his father will not disappear since he will settle the score in Dimensional Crack and end everything. He wonders if he should wait for Jin-ah to grow up and explain what happened. Bellion returns and reveals that the Shadow Army has defeated all the enemies and left no enemy breathing. Sung Jinwoo told Bellion that they would never taste a defeat again. He summons his army since the battle is about to begin. The monsters begin appearing above the sky.

Solo Leveling Season 2 Chapter 179 will be released on 30 December 2021. The King of Dragons Antares also joins the battle and realizes that the Monarch of the Transfiguration Yogumut has been killed. His minions ask if they should retreat, and Antares replies that he is tired of running and will fight Sung Jinwoo. He was impressed with the Shadow Monarch since he never thought Sung Jinwoo would use the Cup of Reincarnation to reverse the time. Let’s meet when Solo Leveling Season 2 Chapter 179 official details.

RRR Pre Release Event: All That Went Down, Plot & Cast of The Movie