Now that the King is looking for a Crown Princess, what will be Yi San And Sung Deok Im's fate? Find out in The Red Sleeve Cuff Episode 8. 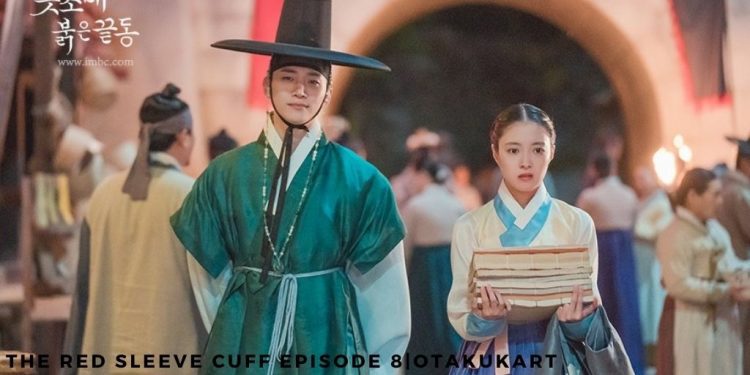 The Red Sleeve Cuff will soon be airing, and fans can hardly wait. Within the release of a few episodes, we have seen Sung Deok Im use her genius to get out of tricky situations countless times. An independent female character is a rarity to find in historical dramas, but Sung Deok Im is a true gem. Furthermore, Lee Se Young’s (The Crowned Clown, How Are You Bread, A Korean Odyssey) acting in this drama will make you believe that she was born to play this role. From saving countless court ladies through her reading, helping the Crown Prince win the King’s favor, to answering all of the Queen’s riddles in a jiffy, she has done it all.

Additionally, The Red Sleeve Cuff is also the highly anticipated comeback of 2PM’s Lee Jun Ho (Just Between Lovers, Work Of Love) after two years due to his military enlistment. Despite carrying the difficult responsibilities of being a crown prince on his shoulders, Lee Jun Ho, through his character, Yi San, will make you laugh out loud with his antics. Consisting of romance, mystery, castle politics, and comedy, The Red Sleeve Cuff is an all-in-one, so do not miss out on episode 8 of this magnificent historical series.

Will Yi San confess to Sung Deok Im? Will Head Court Lady Jo use Sung Deok Im dethrone the Crown Prince? Will the King accept their love? The Red Sleeve Cuff Episode 8 will be released on the 3rd of December and will answer all of fans’ burning questions. This historical kdrama will be telling us the tragic tale of a King who chose his people and a court lady who wanted to live her own way over the course of sixteen episodes. Moreover, each week two new episodes of The Red Sleeve Cuff boasting Lee Jun Ho and Lee Se Young’s dazzling chemistry are released on Friday and Saturday.

Although it is a historical kdrama, Jung Hae Ri’s (The Emperor: Owner Of The Mask) impressive writing will make keep you intrigued every second of the episodes. Currently, Yi San’s position on the throne is always in jeopardy. This is because the King is afraid that Yi San will turn out to be just like his father. To prove his grandfather and other ill speakers in the castle wrong, Yi San goes out of his way to work hard and study. In Red Sleeve Cuff Episode 8, the King will start to look for a suitable Crown Princess. Will Sung Deok Im stand a chance? Keep on watching to find out.

How to Watch The Red Sleeve Cuff Episode 8?

The Red Sleeve Cuff is yet another successful MBC historical kdrama. It has taken up the 22:00 time slot according to Korean Standard Time on Fridays and Saturdays. Which is 6:30 pm in India, 12:00 am in Australia, 1:00 pm in the UK, and 8:00 am in Canada, and 8:00 pm in the United States. Furthermore, this Jung Ji In’s (Let’s Hold Hands and Watch The Sunset Together) first project after a three-year-long hiatus. With the amazing comedic timing, romance sequences, and representation of the Korean culture, she has outdone herself once again. Each episode is nearly 1 hour and 30 minutes long, but it feels like fifteen minutes with an intriguing plotline. Moreover, if you are an International viewer, then luckily, The Red Sleeve Cuff Episode 8 is available to watch on Rakuten Viki. Rakuten Viki has subtitles in more than fifteen varying languages for The Red Sleeve Cuff.

What to Expect From The Red Sleeve Cuff?

With the intense rivalry between each castle member, The Red Sleeve Cuff takes a new turn every single second. In the previous episodes, we learned that the Head Court Lady Jo has a strong reason to stop Yi San from taking over the throne. She recalled how his father used to beat the court ladies up. According to the preview, she will be picking up Sung Deok Im in order to achieve her goal. But will Sung Deok Im be strong enough to reject her superior’s orders? Make sure to watch The Red Sleeve Cuff Episode 8 to find out.