Sun Joo Is Jailed on The Suspicion of Murder of Mi Ra In ‘Show Windows: The Queen’s House’ Episode 7

Myung Seop is a devoted husband but he can't deny his love for Mi Ra. Because of these many complications arises in the lives of Sun Joo, Myung Seop, and Mi Ra. 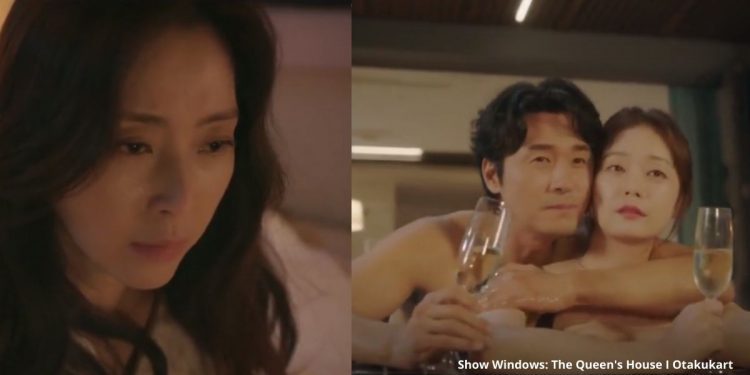 The South Korean drama ‘Show Windows: The Queen’s House’ has a story that intrigues a viewer to think about the mystery involved. The actress Song Yoon Ah plays the character of Han Sun Joo. She is a warm and cheerful person who loves her husband immensely. After marriage, Sun Joo focused only on her family, but when she finds out about her husband’s affair, her heart breaks into a million pieces. In ‘Show Windows: The Queen’s House’ episode 7, we will see the aftermath of Myung Seop’s affair being revealed.

Sun Joo is the daughter of Kim Kang Im, who is the CEO of a big designing company. Kang Im always keeps testing Myung Seop for his loyalty. Even though Sun Joo trusts her husband blindly, her mother always warns her to be careful. The role of Myung Seop is played by the South Korean actor Lee Sung Jae. Finally, the actress Jeon So Min plays the role of Myung Seop’s lover Yoon Mi Ra.

Han Sun Joo has a perfect life, born in a rich family with loving people around her. She has never experienced hardship in life. After marrying Shin Myung Seop, she becomes a picture-perfect wife with great kids. But she is unaware of the disaster that is coming her way. Sun Joo’s husband Myung Seop is having an affair with Yoon Mi Ra. And this will be the reason behind Sun Joo’s tragedy.

Myung Seop is not from a wealthy family, and he uses his mother-in-law to climb up the ranks in her company. Even though he seems to be a devoted husband, his infatuation with Mi Ra grows every day. When he is on a business trip, Mi Ra tells him that they should end things on a good note, but it is not as simple as it seems. After seeing Myung Seop with his wife, she becomes jealous and wants to remove her from Myung Seop’s life. In order to do so, she makes a plan to meet Sun Joo and make it look like a coincidence.

Also Read: ‘Something In The Rain’: Plot, Cast, Review & Where to Watch

When Myung Seop finds out that Mi Ra tried to take her life, he rushes to the hospital. No matter how hard he tries, he cannot deny anymore that he is in love with her. While Sun Joo leads an ignorant life, Mi Ra keeps strengthening her relationship with Myung Seop. Also, she is forming a friendship with his wife. What is Mi Ra’s motive behind pursuing Sun Joo?

Even though Mi Ra’s intentions are not clear, Sun Joo treats her as her sister and even fights with her evil uncle for her. Another person who is very important in Sun Joo’s life is her brother Han Jung Won. He lives abroad but has returned to South Korea. Also, he loves his sister more than anyone. If he ever finds out about Myung Seop’s affair, the outcome won’t be good.

The drama ‘Show Windows: The Queen’s House’ revolves around a murder mystery. In the upcoming episode, we will see that Sun Joo attacks Mi Ra. At Myung Seop’s wedding anniversary Mi Ra will have an encounter with Sun Joo that will lead to a fight, and the escalation will result in Mi Ra being hospitalized. Also, Sun Joo will be jailed, and there will be numerous speculations about why Mi Ra was attacked. Watch ‘Show Windows: The Queen’s House’ episode 7 to find out.

The ‘Show Windows: The Queen’s House’ Episode 7 will release on 20th December 2021. Mi Ra’s life is already complicated, considering her affair with Myung Seop. Adding to this, she has an uncle who wants to take advantage of her relationship with Myung Seop. Will this be the reason for Mi Ra’s downfall? Find out in the upcoming episode.

Where To Watch ‘Show Windows: The Queen’s House’ Episode 7?

Demon Lord’s Army vs Crazy Guild In The Fruit of Evolution: Before I Knew It My Life Had It Made Episode 12