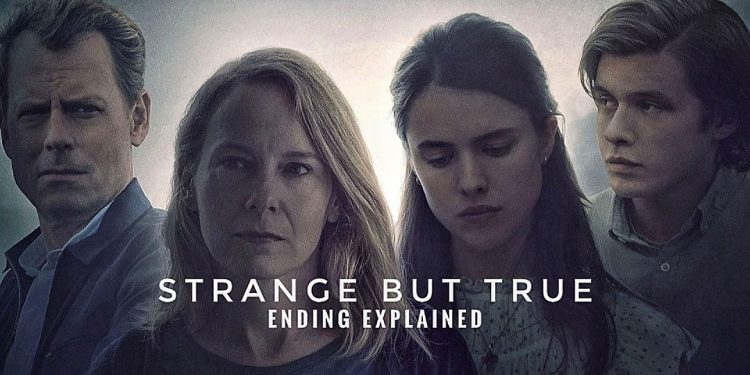 “Strange But True” follows a plot that justifies its title for the most part. At the center of it all is Melissa, who’s several months pregnant. We learn that her boyfriend Ronnie died five years ago, the night they went to prom. The plot kicks off when she visits Ronnie’s house where his mother and younger brother live. With an unexpected visit, Melissa also comes with an unprecedented and absurd claim that she’s pregnant with Ronnie’s baby. The reason for her claim is that she had only ever slept with one man — Ronnie. The five years too late pregnancy becomes a case of curiosity, then suspicions, and then of some truly dark revelations.

By the time the ending of “Strange But True” arrives, we have learned the answer to the mystery, but another mystery regarding the fate of the characters persists. The 2019 neo-noir thriller stars Margaret Qualley, Amy Ryan, Nick Robinson, Brian Cox, Blythe Danner, Greg Kinnear, and Connor Jessup in the main cast. Helmed by Rowan Athale with a screenplay by Eric Garcia, “Strange But True” entails a thrilling ending. Let’s now delve into all that goes down in the movie and what its ending means. Spoilers ahead!

“Strange But True” begins with the Chase family receiving a strange visit by the girlfriend of their dead son. The visit is made stranger still when Melissa — who’s very much pregnant — claims the child belongs to the dead Ronnie Chase. Ronnie’s been gone for five years, following a freak accident after his prom night with Melissa. Ronnie’s mother, Charlene, and younger brother Philip are understandably befuddled and, not to mention, offended. Mellissa’s abrupt visit has already irked Charlene, who asks Philip if she’s come to gloat about her pregnancy.

Melissa claims to be mothering Ronnie’s child, which she claims must be a miracle. She plays a recording she taped of a psychic reading she had. The psychic told her the hullabaloo about a child and Ronnie. Melissa’s visit was already strange enough to begin with, but her psychic tapes just do it for Charlene. She asks Philip to show her the door. Philip also asks her why she’s doing that, making such claims, obviously finding them ridiculous. Later, however, Philip does propose a theory — a big “if” he calls it — that entails Melissa probably freezing Ronnie’s sperms and later using them to impregnate her.

Charlene finds it dubious and later goes to the library she worked at to research the topic. Meanwhile, Philip starts digging up details on his own as well. He goes to the same psychic reader Melissa went to. The psychic tells a thing or two about Ronnie and then gives him an ominous and cryptic warning for something bad that’s going to happen to either him or his family. Meanwhile, Charlene discovers that the sperm freezing process is very much a likelihood. However, she soon starts looking into a more theological aspect of such a puzzling case. Charlene then contacts her ex-husband Richard who’s a physician. She asks him if it’s possible to get pregnant from frozen sperm. She tells him about the case.

Meanwhile, we learn that Melissa has been living with an elderly couple who seem to be the most caring and wholesome. They have taken in Melissa and have been caring for her. Melissa lives at the cottage behind their house. However, we learn that her rent has been coming from Richard’s pockets for a while. When Charlene hears of this from Gail, she furiously calls in Richard. His current wife tells Charlene he’s headed for New York. Charlene sets off to directly welcome and confront him at the airport. They get in the car and have an argument. Charlene learns that Richard was in contact with Melissa to cope with his grief because she was never available to have a talk or process grief together, ever.

The Secrets Bill Keeps & The Denouement

Meanwhile, Gail has been concerned for Bill, who’s coughing and has been secretly smoking. One day, Gail discovers his hidden stash of cigarettes. However, there’s another pack containing some kind of tablet. She is dubious and then heads off to the pharmacy to find out what they’re for. Philip visits Melissa, and the two reminisce and share their grief over Ronnie. As Philip leaves, Melissa labor screams calls him back.

As Philip rushes towards the hospital, Gail confronts Bill, having learned a horrible truth about him. Meanwhile, Charlene is worried after not seeing Philip at home, and the car’s missing too. She calls Philip moments after he makes a terrifying discovery himself. As the ending of “Strange But True” approaches, the characters bear witness to an intense series of events, some causing said events unintentionally and some trying to escape the consequences that await them.

The pressing question throughout “Strange But True” is exactly who is the father of Melissa’s baby. Melissa’s pregnancy is a subject of great confoundment right off the bat. According to her, she has never had sexual intercourse with anyone except Ronnie, on the night of their prom and before his eventual tragic death. Five years have passed since that night, and it’s almost impossible for her to be pregnant because of Ronnie. Almost, because there does exist a probability wherein Ronnie’s sperms could be used to impregnate her. It could be done by a real-life process of freezing one’s sperms to make use of in the future.

However, after all the research and digging around, that’s not the case with Melissa’s baby in her womb. Charlene starts doubting if her ex-husband had sexual intercourse with Melissa when she discovers that he’s been paying her rent all these years. However, that’s not the case either. Richard tells her that he started spending time with Melissa to share his grief with someone. When he learned that her strict Christian parents disowned her because of her obsession with magic and psychic stuff, he felt he owed her and decided to help her with her rent. What he thought to be a short-term help soon turned into a permanent thing and eventually became a habit. However, he did not have sex with her. No, Richard was not her baby’s father.

It was Bill. He’s the father of Melissa’s baby, and he impregnated her without her consent and her ever recalling anything about it. The fatherly figure who had helped her during her worst time along with his wife was a monster. Behind that helpful, kind, and cute smoking-in-secret persona, Bill was a sick sexual offender. He had been giving Melissa the date r*pe drug called Rohypnol.

That was the reason why Melissa had been struggling with frequent blackouts and having no memory of what happened. Bill would drug her with Rohypnol and sexually assault her, eventually impregnating her. Later in the film, we learn that he and Gail had tried to conceive a child of their own many times. However, Gail could never get pregnant, and that’s why they never had a child. It was possibly his wish to have a child of his own that transformed into the dark and sick actions he committed.

Strange But True Ending — Who Dies in the Movie?

The ending of “Strange But True” has a total of two deaths. The first one to die is Gail, at the hands of Bill. It happens when she confronts him about the date r*pe drugs in their basement. As he climbs up the stairs, the distressed and broken Gail starts throwing hands at him. In the little physical struggle that ensues while they’re both climbing, Gail falls down the stairs and to her tragic death. Meanwhile, Melissa asks Philip to call Bill and Gail to accompany her to the hospital. Philip goes to tell them but witnesses a horrible scene — Bill is sitting beside Gail’s corpse. A horrified Philip gets into trouble when his phone starts ringing right as he witnesses the horror. This alerts Bill, who rushes outside and sees Philip, who’s trying to tell Charlene about what just transpired.

Philip drops the phone, and Bill tells him it’s not what it seemed like. He tries telling him it was an accident, but the shotgun in his hands doesn’t help convince Philip. As Philip starts running into the woods, Bill gives chase and eventually catches up to him, knocking him out. Meanwhile, Charlene and Richard rush to Bill’s house and soon find Philip’s phone ringing in the woods nearby. Bill, meanwhile, is burying Philip alive, but he regains consciousness and starts escaping. Bill tries to choke him to death, but Philip perseveres and fires off a shotgun. His parents hear that and shield him from Bill, who’s pointing his shotgun at them. For a moment, we think Bill has shot Charlene. However, we learn that Bill turned the gun onto himself and shot him after saying he didn’t mean to kill her, referring to Gail.

What Happened to Ronnie — How Did He Die?

Throughout the movie, we get these flashbacks to the night Melissa and Ronnie went to their prom. They were the happiest couple, and it was probably the happiest night of their life. The picture-perfect Chase family sent the cute couple off to the prom on a limousine Ronnie and his friend had rented. A beautiful night preceded Ronnie’s tragic death, where he and Melissa shared intimate moments and made love.

On their way back home, Ronnie confesses his love to Melissa, to which she says he’s not loud enough. He says it again, this time louder and letting their friends sit in front of them. However, Melissa pushes on, and Ronnie gets up, opens the roof of the limousine. He shouts out his love for Melissa, feeling the euphoria of love. Meanwhile, the chauffeur keeps warning him to get inside, but Melissa and others don’t pay heed to it. He eventually leans back to warn him to get back inside, distracting him from oncoming traffic. The limousine crashes into the oncoming vehicle, and Ronnie dies in the car accident.

“Strange But True” is currently available to stream online on Hulu.

Also Read: Nick Robinson Girlfriend: Who Is The ‘Love, Simon’ Actor Dating In 2021?