Station Eleven Season 1 Episodes 6 & 7 might see Kirsten making all the moves possible with the help of the book. 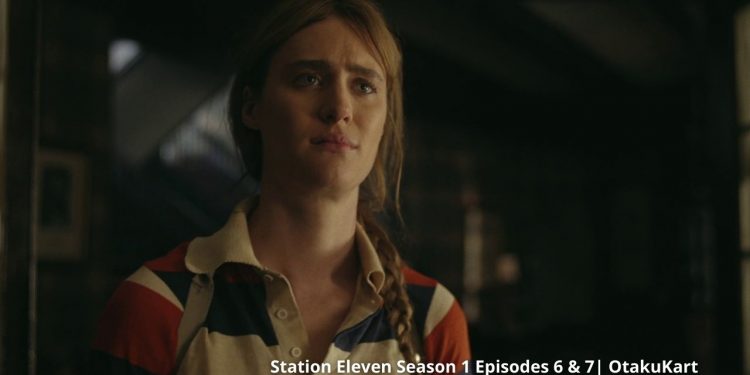 Station Eleven Season 1 Episodes 6 & 7 might tell us how things would go down between Prophet and Kirsten as now they have the hold of the same book. Recently on the show, we not only saw the havoc he is wreaking but also how he came to this point. The fourth episode took Travelling Symphony back to Gil. The Pingtree saw every child following the ways of the Prophet. They returned by the end of the night but tied to them was something Gil never saw coming.

The fifth episode, on the other hand, told us about the first day the flu actually started spreading around the world. It saw a group of people stranded at the airport. Things looked more like what every other post-apocalyptic movie or show would have. People find ways to survive, listening to a new leader, betrayals, and people left behind. Amidst all of them was one chaotic personality whose revelation served the purpose of the episode.

Previously on Station Eleven, the group had reached Petoskey Station, where they once again came across the stranger. He came riding on the bike, asking them again to join the Museum of Civilization. Although the group again declines to join him, he ain’t giving up. He promises to approach them again further down the line. Meanwhile, doing cartwheels led Alex to come across a note that says “beware of the mysterious Prophet”. Elizabeth looks at it and realizes who this could be. She needs her Station Eleven book, which means she may need to go back to Pingtree to get the copy.

The group had to split, and half of them reach the Pingtree on which the sign suggests is full and landmines. The group believes it to be fake until Gil comes warning them. Anyway, the group survives and finds out about the wrath that Prophet brought. Kirsten grabs what she came for. After putting on a show in front of all the professors, the episode came to a close with kids who went with Prophet returning with mines strapped to their chest. One of them goes to hug Gil that sets off a mine.

Also Read: What Goes Down In ‘Claws’ Season 4 Episode 4?

Coming to Episode 5, the show takes us back in time to the first day the flu starts spreading. A day after Arthur’s death, many people, including Clarke, Elizabeth, and her son Tyler find themselves trapped at the airport with all airlines closed as the flu starts spreading rapidly. Elizabeth tries to maintain her distance from Clarke until things start to change around. A group of skilled individuals decided to take the chance and leave with their airplane to somewhere else.

The entire airport worries while Clarke assures each one of them that these individuals thought they were smart, but they weren’t. He assured that they had enough resources to sustain life here, Elizabeth and a security guard supported Clarke. Amidst all of this, Elizabeth’s own son became a threat as he brought an outside individual infected inside the airport and even burnt down an aircraft. The episode closes with the revelation that Tyler is the Prophet.

Station Eleven Season 1 Episodes 6 & 7 are releasing on 30 December 2021. Episode 6 is titled “Survival is Insufficient,” and Episode 7 remains untitled. There is no official synopsis of the episode as of now. From what we saw in the previous episode, we are expecting the Travelling Symphony to once again cross paths with the Prophet, the one who relies on Station Eleven. Now that Kirsten has her hands on the book, too, there is some chance of survival they see ahead.

In Australia, Station Eleven Season 1 Episodes 6 & 7 will release around the same time as the United States. Coming to India, although the majority of HBO content is on Disney+ Hotstar, the sixth & seventh, or any of Station Eleven’s past episodes haven’t come on the platform yet.

Also Read: The Family Is Not Together As We Move To Yellowstone Season 4 Episode 10