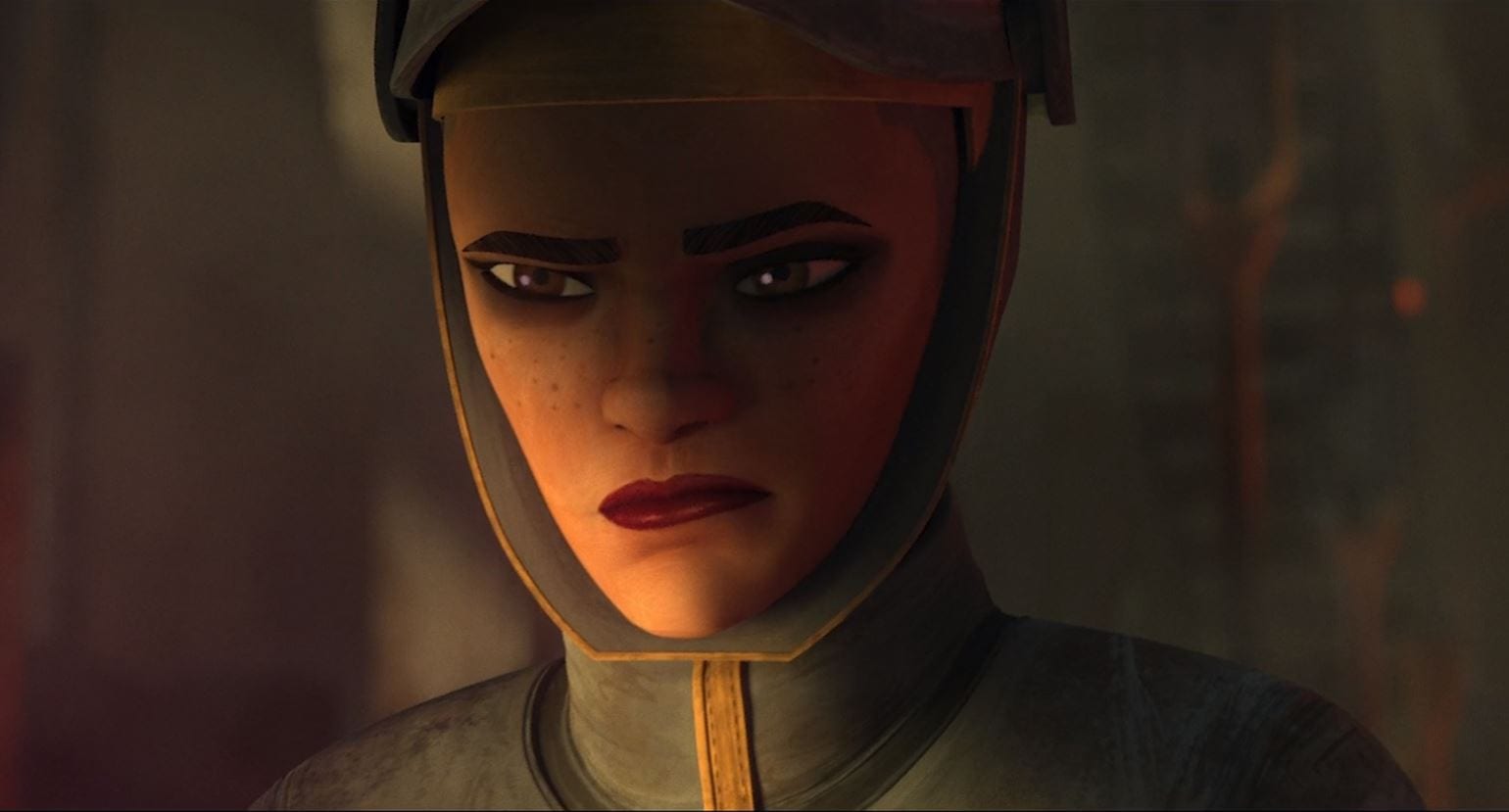 Star Wars: The Bad Batch Episode 6 is out, and with that, we have an all-new adventure waiting for us. In the last episode, the Bad Batch was asked by Cid to complete a task for her. Doing so would earn the team credits as well as information on the bounty hunter behind Omega. This was a rescue mission where the Clone Force 99 was to rescue an alien named Muchi. Muchi had been captured by some Zygerrian slave traders who were located on the opposite side of Ord Mantell. The team is able to locate Muchi within the prisoners successfully. While there were some mishaps during the mission, the Clone Force 99 were successful as they were able to return the alien back to Cid’s client. Moreover, they earn some Imperial credits as well as information on the Bounty Hunter named Fennec Shand.

Star Wars: The Bad Batch is an adult animated series set parallel to the events of Original Star Wars Trilogies. The events that occur in Bad Batch are in direct continuation to that of Star Wars: The Clone Wars. This means that Star Wars: The Bad Batch shows us the direct aftermath of the Clone Wars. Here, except for a team of enhanced Clones, the rest have been asked to initiate Order 66. The Clones were now under the Empire as they were to kill all Jedi. But even out of the five members of the Bad Batch, Crosshair was augmented to follow orders of the Empire. So, when the rest realize this as well as the existence of another enhanced Clone named Omega, they fetch her and leave Crosshair on Kamino. Now, the Bad Batch are navigating their way through space, trying to avoid any confrontation with the Empire.

What Happened in Star Wars: The Bad Batch Episode 6?

Star Wars: The Bad Batch Episode 6 titled “Decommissioned” followed up with the Clone Force 99 as they were making themselves at home at Ord Mantell. In the last episode, we saw how Omega found a Zygerrian crossbow. And now, making it her weapon of choice, she was doing some target practice within Cid’s establishment. At that point, Cid appears as she interferes with the training session with a new mission for the Bad Batch. Hunter reminds her how they had not decided on working for Cid. Nevertheless, Cid doesn’t take no for an answer as she makes the decision for them, seeing that it was the best option for the Clone Force 99. Moreover, before she leaves, she advises Omega on her Shooting skills. She tells her how she must develop arm strength, due to which she was unable to hold the bow longer, causing it to misfire.

The Mission Cid recruited the Clone Force 99 was to retrieve the head of a Separatist Tactical Droid. This mission was to take place in Han Solo’s Home Planet, Cordellia. Here, all the droids were being Decommissioned after they had been defeated in the Clone Wars. But these Tactical Droids have valuable data that has been stored through time whenever a droid would face Clones in battle. So, now these Tactical Droids had increased in value due to their data that could be used to defeat the Empire’s Clone Forces. 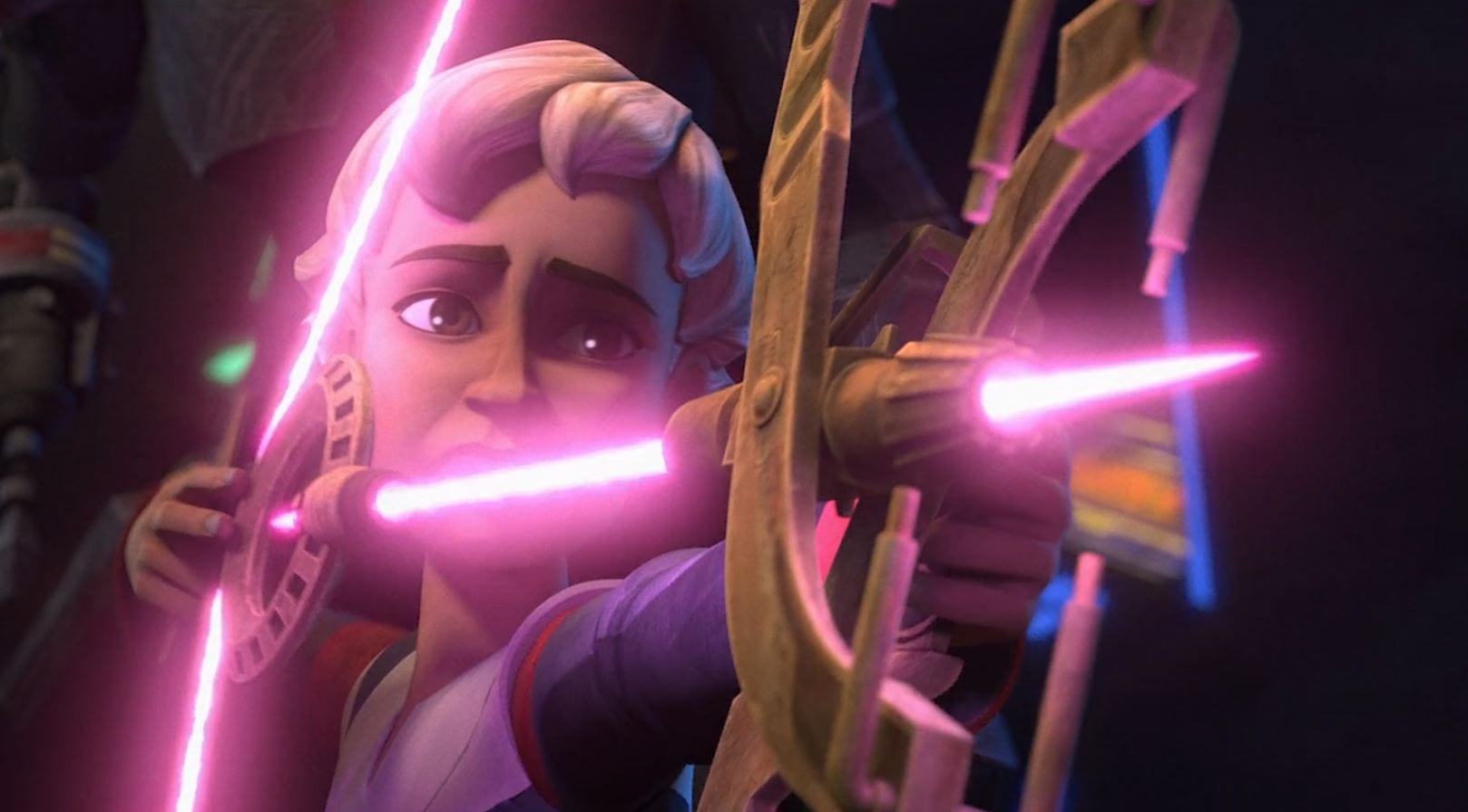 Omega training with the crossbow

The same was explained by Tech to his teammates on how the information available on these Tactical Droids could be used to strategize against the Empire. The team lands on Cordellia as they infiltrate the decommissioning facility. But this was being guarded by Police Droids, which forced the team to stay vigilant. Wrecker was assigned to lookout duty while Hunter, Echo, and Tech were to retrieve the Tactical Droid. Soon enough, they discover that there was only a single Tactical Droid within the plant. That, too, was up for grabs as the Clone Force 99 aren’t the only ones after the Tactical Droid. This starts a game of tag between the two teams going after the head of the Tactical Droid.

The other team that was after the Tactical Droid was the duo of the Martez Sisters. They first appeared in Star Wars: The Clone Wars, where they became close to the former Padawan of Anakin Skywalker Ahsoka Tano. These were Rafa and Trace Martez, who were recruited by someone to do the same mission as the Clone Force 99. In the beginning, the team tries to decipher who the two combatants were as things started in hostility between the two groups. They were trying to take each other down as Omega encounters Rafa. Here, she seemingly gives up, only to attack her again. This causes Omega to shoot an arrow, causing a fire within the facility. Soon, we see reinforcements arrive at the station as there is a complete lockdown preventing the infiltrators from escaping. 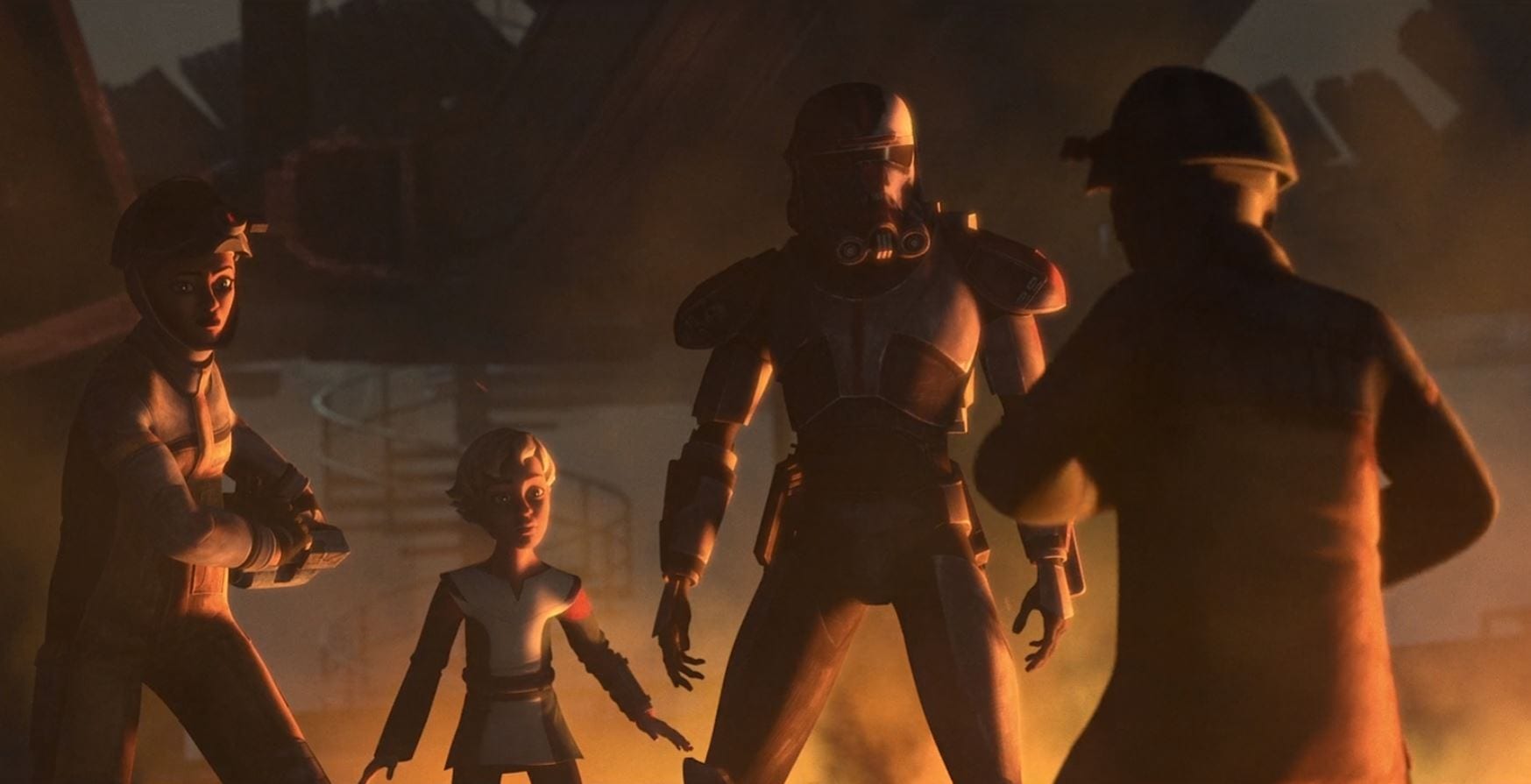 The Clone Force 99 and Martez Sisters

The only objective that the two teams carry was to retrieve the head nevertheless, they did have the common objective to flee from the decommissioning station. Rafa retrieves the Head as she informs Trace of the same and heads for the exit. But as she realizes that Omega was stuck and in danger, she turns back. Meanwhile, Trace and Hunter work together to shoot down waves of Police Droids. Soon Hunter receives Omega’s distress call as the two head towards her. In the meantime, Rafa had reached back to Omega as she rescued her from being incinerated along with the decommissioning droids.

What Happened With Wrecker?

While Echo and Tech tried to create an escape through the Lockdown, they ended up shorting out the entire facility’s system. So, they ask Wrecker’s help to have him reach the main control panel. As it was a little out of reach, Wrecker has to leap for it again, hitting his head. But this time, we surely see signs of Wrecker having issues with his Inhibitor Chip. His head was playing the memories of Crosshair saying, “Good Soldiers, Follow Orders”. And it is now ever so confirmed that the team might have to face Wrecker in the future as a possible obstacle. Nevertheless, Wrecker is able to fight through for the meantime as he makes a Superhero entry into the battlefield, taking down several Police Droids in an instant. This causes Trace to have an instant liking towards Wrecker. 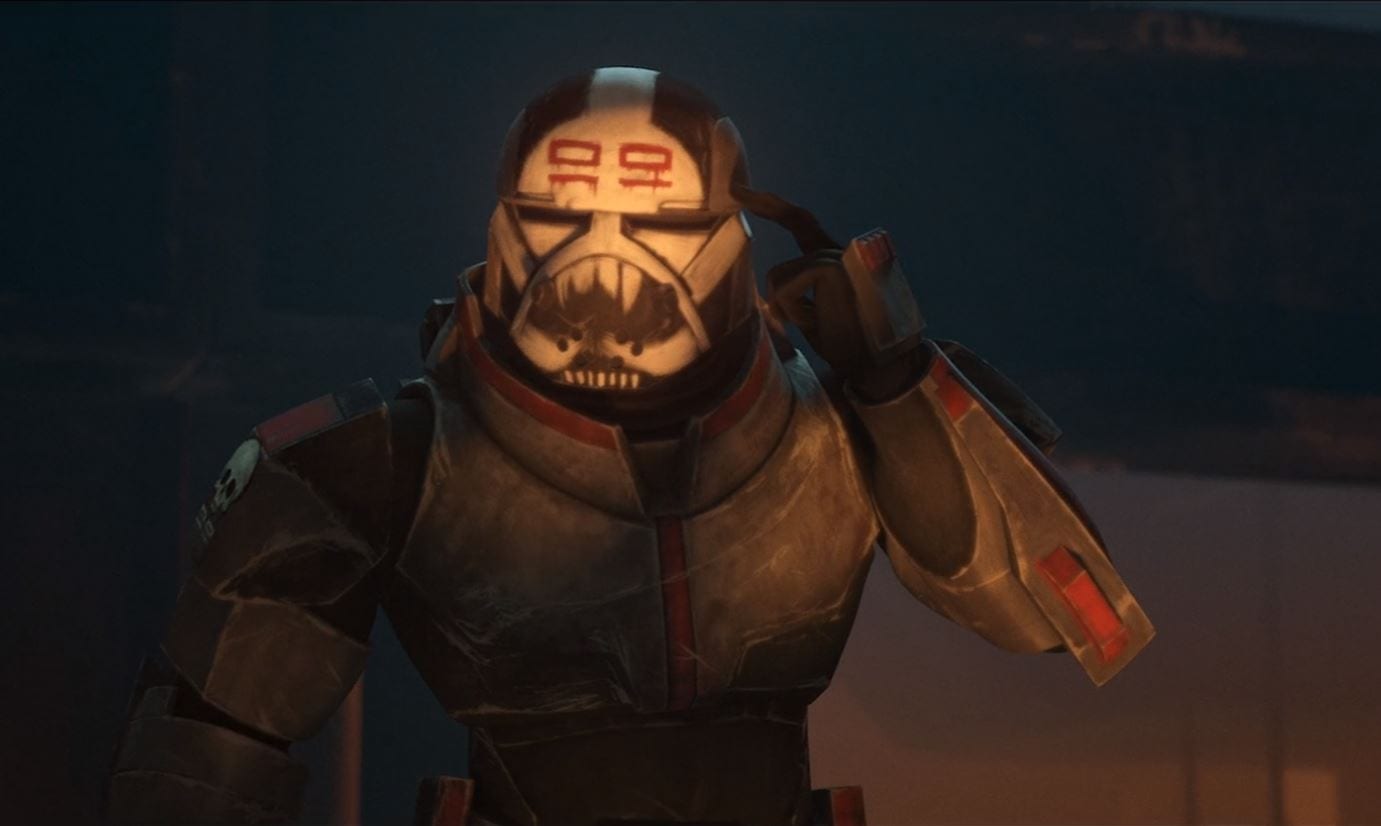 How Do They Escape The Decommissioning Plant?

The plan which Rafa and Tech come up with is to make use of the Tactical Droid Head to commandeer the existing clones in the facility. They will make use of them to takedown the Police Droids. For this, they require time which is bought by Wrecker. Slyly, while establishing a stronger connection between the Head as well as the Droids, Tech manages to copy the data onto another device. Soon after, the connection is established as the droids obey Rafa’s orders attacking only the facility security. This gives the Clone Force as well as the Martez Sisters to make their escape together on the Sisters’ shuttle. But during the escape, this Tactical Droid Head is destroyed, causing the sisters to believe that their mission had failed. 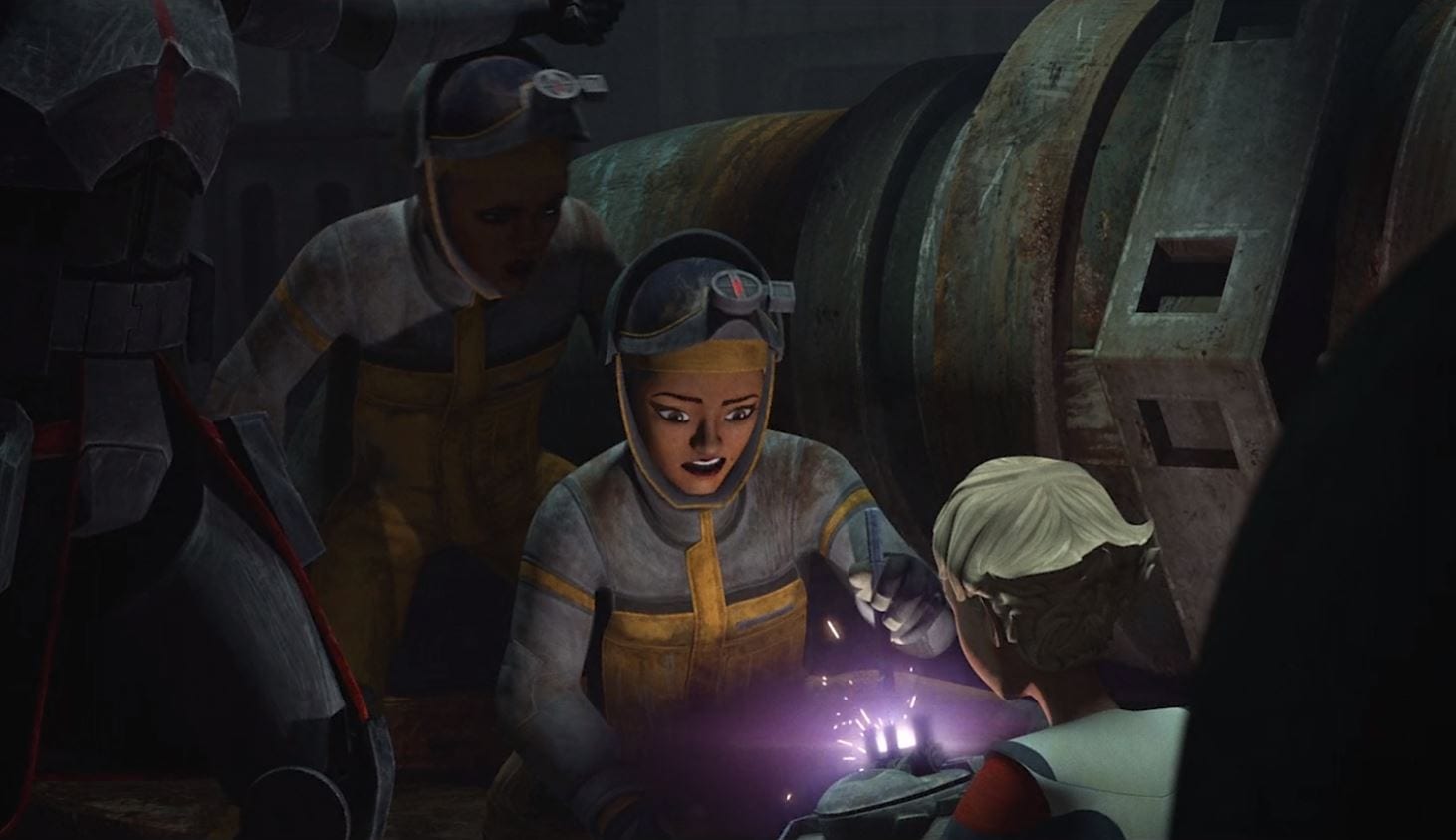 What was the Martez Sisters’ Mission?

The Martez Sisters’ were to retrieve the Tactical Droid Head and get it back to their Client, who was aiming to fight back against the Empire. They are astonished to hear how the Clone Force 99 were risking their lives with such valuable information on the line without knowing who it was going to. Nonetheless, the Bad Batch was only aiming to complete the mission to earn credits. Later, as the sisters dropped off Hunter and the crew near their ship, Omega seems to have developed a good relationship with the two. And seeing that the sisters’ objective was for a positive outcome, Hunter hands over the Droids’ data that Tech had managed to copy on another device.

Who are the Martez Sisters Working For?

At the end of Star Wars: The Bad Batch Episode 6, The Martez Sisters are seen communicating with their client. While the character is not shown, it can be presumed that they are an important character from the past. In the show, there was a reference to Rex. He was one of the few clones who had their inhibitor chips disabled way before the events in the Bad Batch. Another possibility could be Saw Ferrera, who was known to have formed a rebellion against the Empire. One other unlikely possibility could be Darth Maul, who was trying to get revenge on the former Republic. Nevertheless, the most likely candidate for the mysterious character seems to be someone in a Jedi robe, possibly Ahsoka Tano. 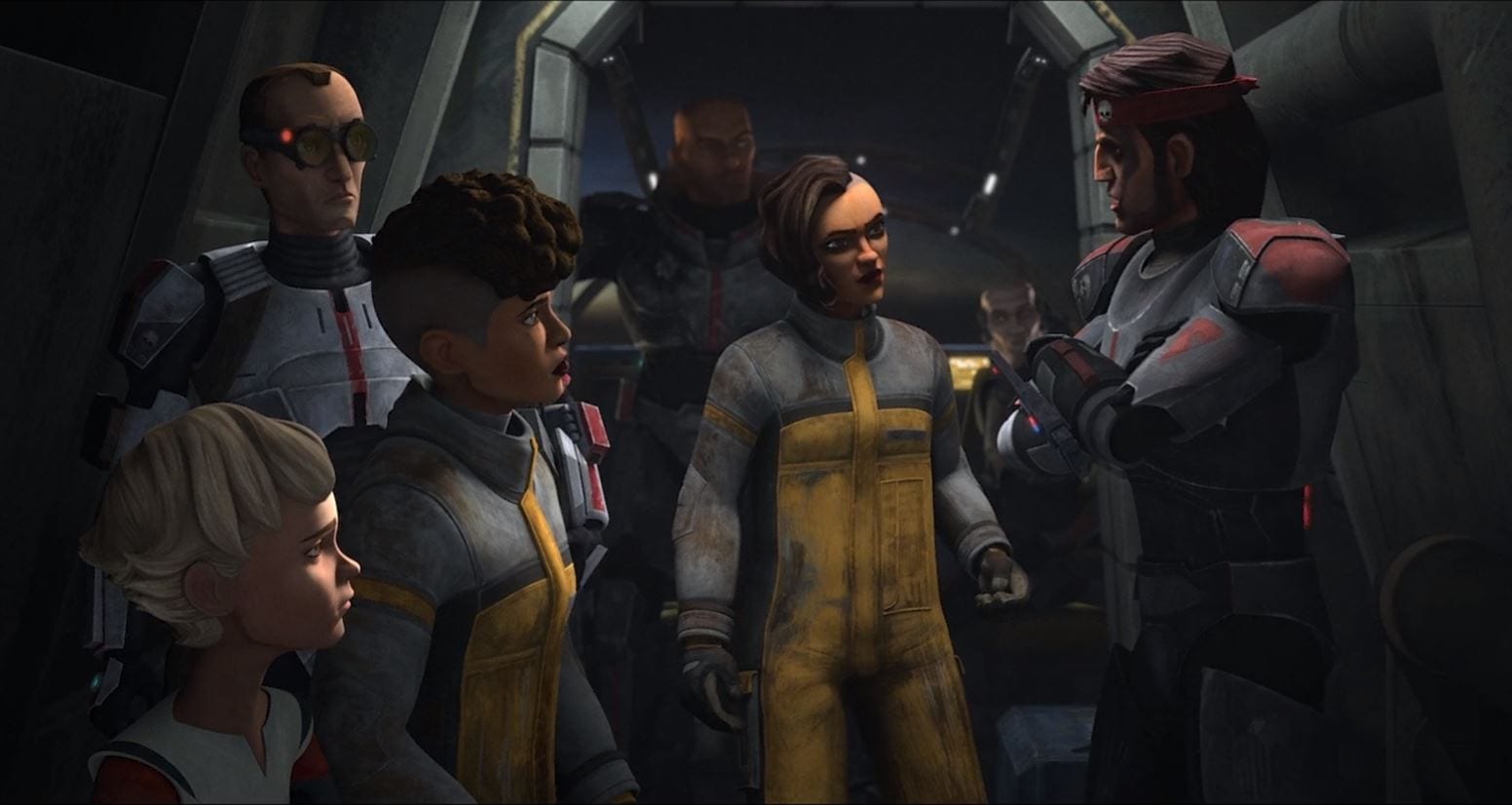 Martez Sisters and the Clone Force 99 on a ship