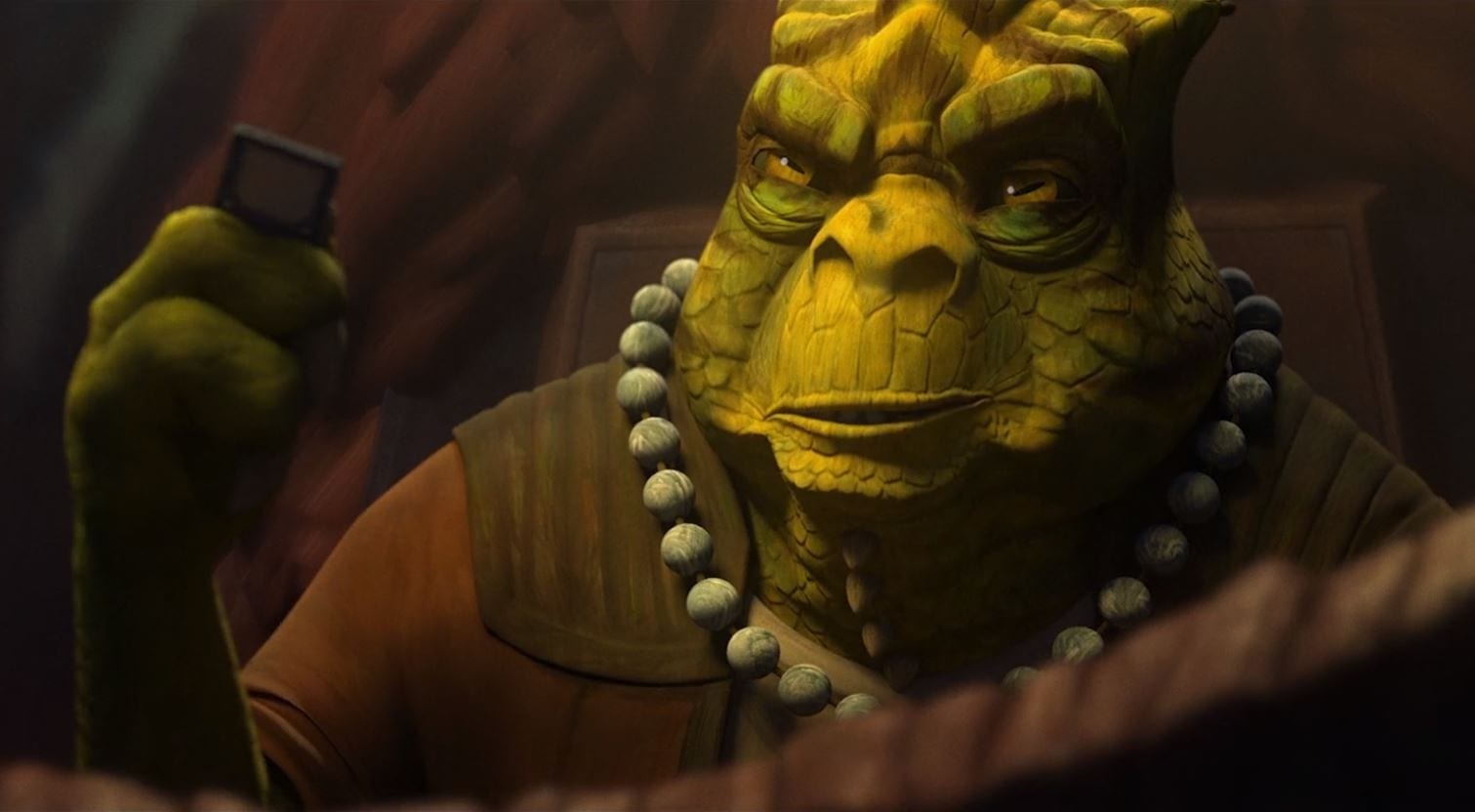 Star Wars The Bad Batch is a direct sequel animated series to Star Wars: The Clone Wars. The events of the show continue directly from its end, as the war comes to a close. But the moment it happens, The Republic initiates Order 66 that tasks all the Clone Troopers to take down the Jedi. All of them comprehend the order, except for the five members of the Clone Force 99. These are enhanced Clone Troopers who all have a special ability. But out of them, Crosshair show signs of compliance to the New Empire’s orders. Seeing this, Crosshair is taken in by them while the rest retain their sense of ideology. The crew realizes that there is one more enhanced clone on Kamino, Omega. They save her and flee away from Kamino. Now heading to episode 6, let’s have Star Wars: The Bad Batch Episode 5 Ending Explained.

In the last episode of Star Wars: The Bad Batch, we saw the Clone force 99 head to Pantora for making some changes to their ship as well as a supply run. During this, a bounty hunter is informed of their arrival on the planet. This Bounty Hunter is out for Omega and even manages to lure her away from her friends. Nevertheless, the Bad Batch soon realizes this as they head to rescue her. With an intense aerial chase over the streets of Pantora, Hunter is able to rescue Omega. This leaves the bounty hunter on the ground as she lives to hunt another day. She goes back to her informant hoping for future intel while the bad batch realizes that they must identify who the bounty hunter was. Moreover, they must uncover who has sent her after Omega. We follow along with these questions in episode 5.

What Happened in Star Wars The Bad Batch Episode 5? 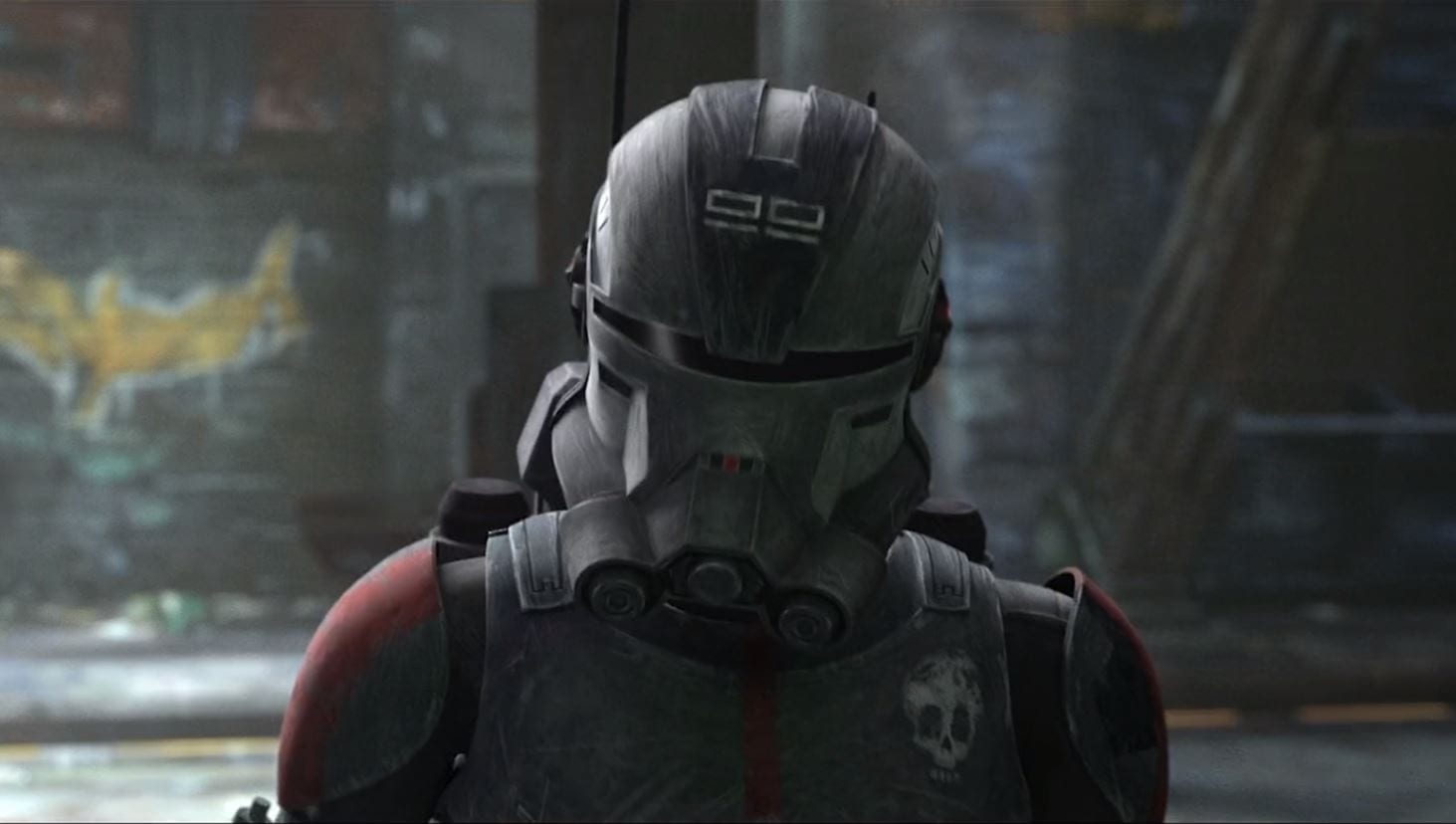 Star Wars The Bad Batch Episode 5 titled “Rampage” starts off with Tech handing Omega with her own Comm device. This had become evidently necessary as Omega was always in a threat to be captured. Unlike their previous plan in which they wanted to stay put, the crew now wants to find out the identity of the bounty hunter as well as who sent her. For this, they were now on the Havoc Marauder heading to Ord Mantell. According to Echo, on this planet there existed a former informant to the Jedi, Cid. As they land on the planet, Omega is reminded of the three rules she must follow. Don’t wander, keep her eyes and ears on the surrounding, and trust no one except for her squad. And if she does get lost, she must contact her crew using the comms and give her location. 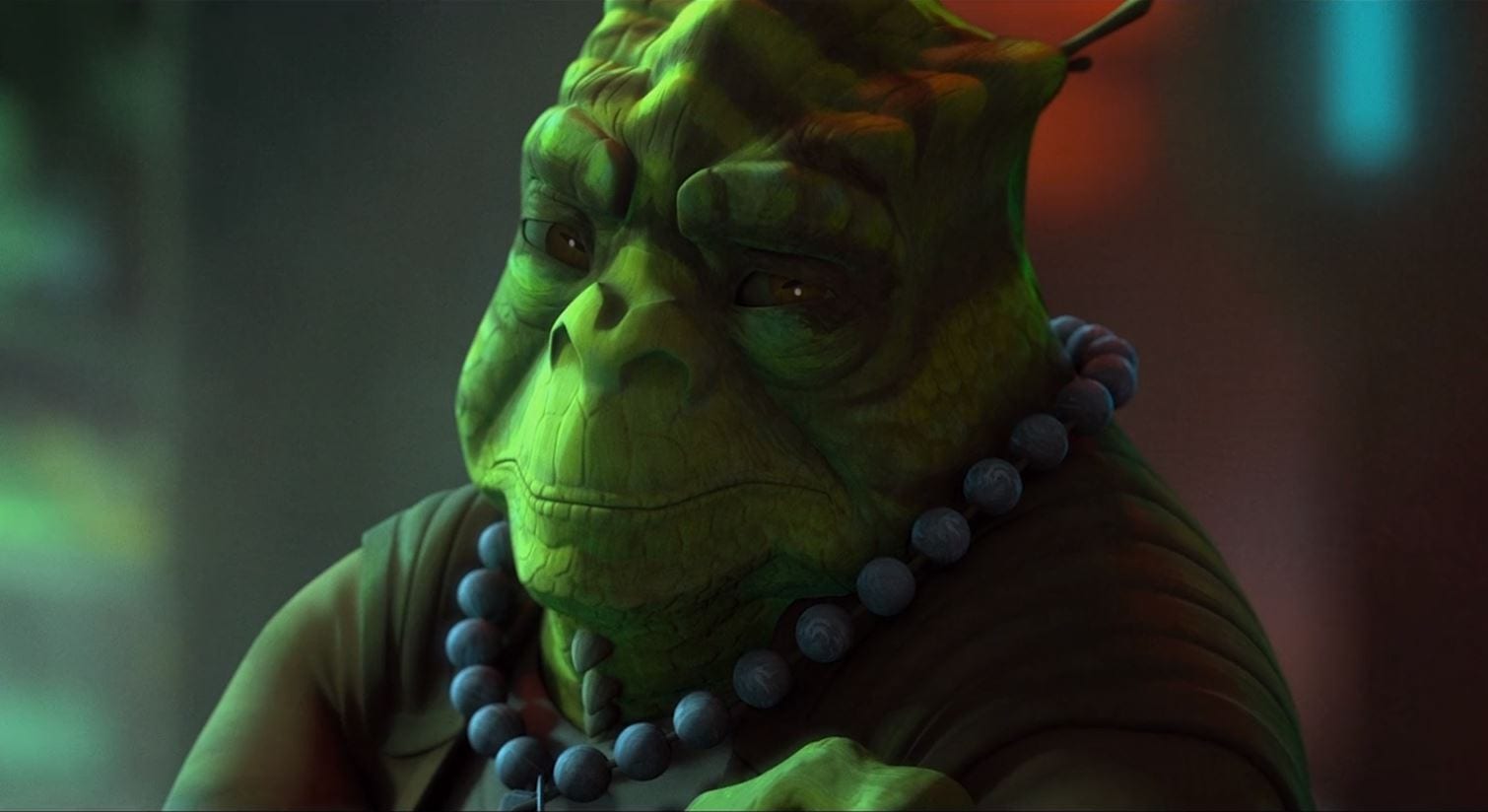 The Bad Batch arrives at a casino that was formerly the place where the Jedi came to meet the informant. But the Trandoshan who works there claims that she had never heard of such a name. While the rest of the crew doubt Echo’s intel, Omega soon realizes that the Trandoshan herself was Cid. She takes the crew back to her room where the Bad Batch shows her imagery of the Bount Hunter who was after them. While Cid couldn’t identify her at the moment she initiates a trade. The Bad Batch was to rescue a child named Muchi from the Zygerrian slave traders. In the meantime, she would use her contacts to get intel regarding the Bounty Hunter. That was not all, as she would also give them 30% of the cut she was about to receive from her client. The Bad Batch then heads to their new mission. 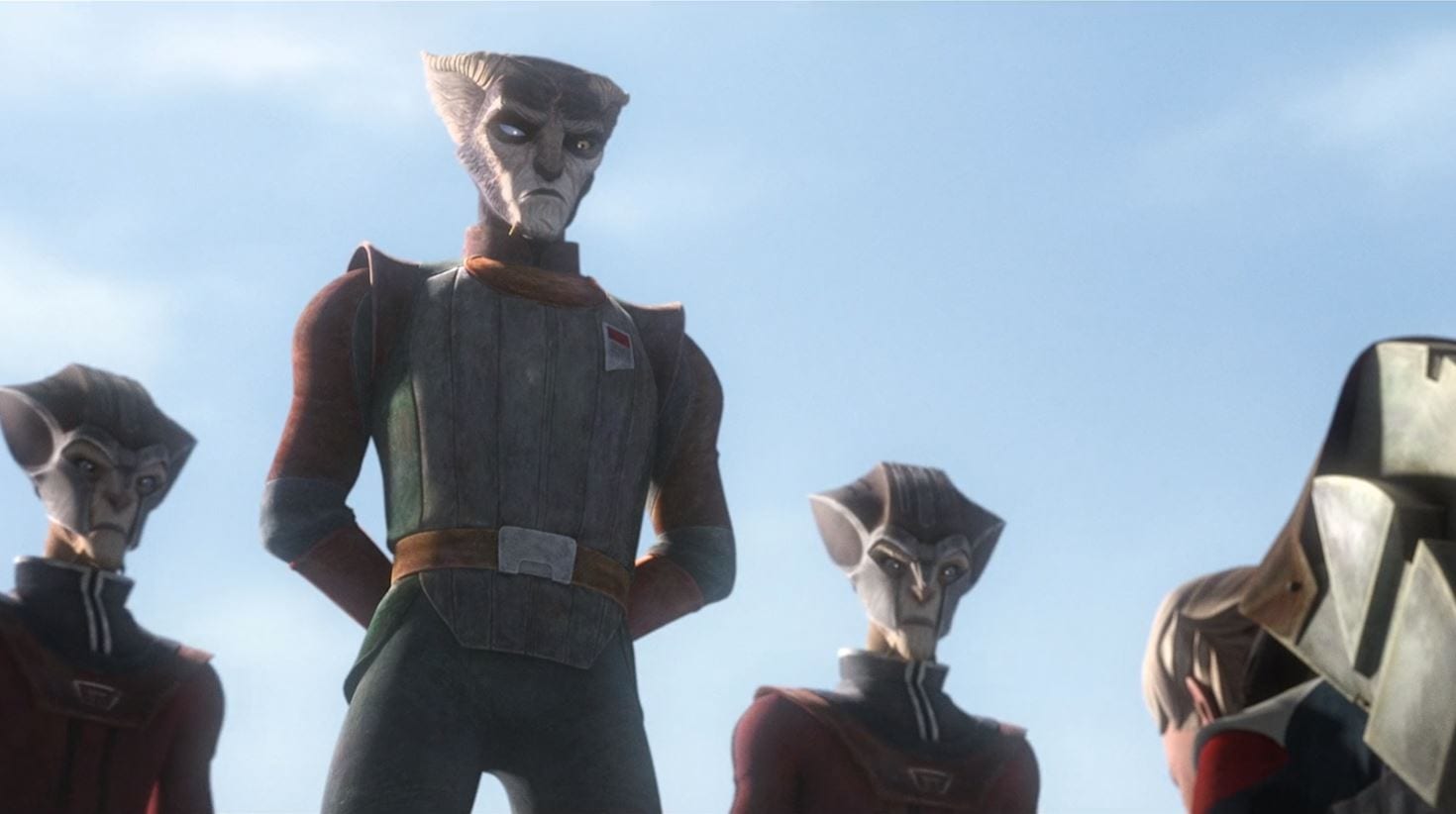 The Zygerrians were a group of feline-like humanoid beings that were known around the galaxy to be slave traders. The slave trade was abolished by the Republic while their last appearance took place in Season 4 of Star Wars: The Bad Batch. Here, except for Omega, everyone heads to a Zygerrian stronghold to rescue a Falleen girl who they interpret to be Muchi. But soon after, a Brezack attacks the crew leading to the Zygerrians immediately capturing them thus taking them under custody. The leader of the group could not be happier as he received four new slaves with combat experience. These would fetch higher prices in the market. While the Republic had abolished the slave trade, that was not the case for the empire. Moreover, the Zygerrians were working under Darth Maul. The crew wants to contact Omega but their comm devices were taken away from them.

In the meantime, two Zygerrians come to investigate the Havoc Marauder for any reinforcements. But Omega manages to slip away making them think there was no one else remaining. Omega soon realizes that her friends were in trouble and as she observes through her binoculars, they had been captured. So, Omega heads to save them as she covertly makes her way through the Zygerrian stronghold. At first, she was aiming to get to the Clone Force 99’s devices but soon decides to free a monster that had been captured. Omega is caught soon enough but she had managed to pick the lock. An adolescent Rancor appears from within as it causes a rampage. Through all the commotion, the Bad Batch manages to free themselves as they try to rescue the Falleen girl. But at that moment, the team realizes that the Rancor was Muchi.

What Happened in Star Wars The Bad Batch Episode 5 Ending? 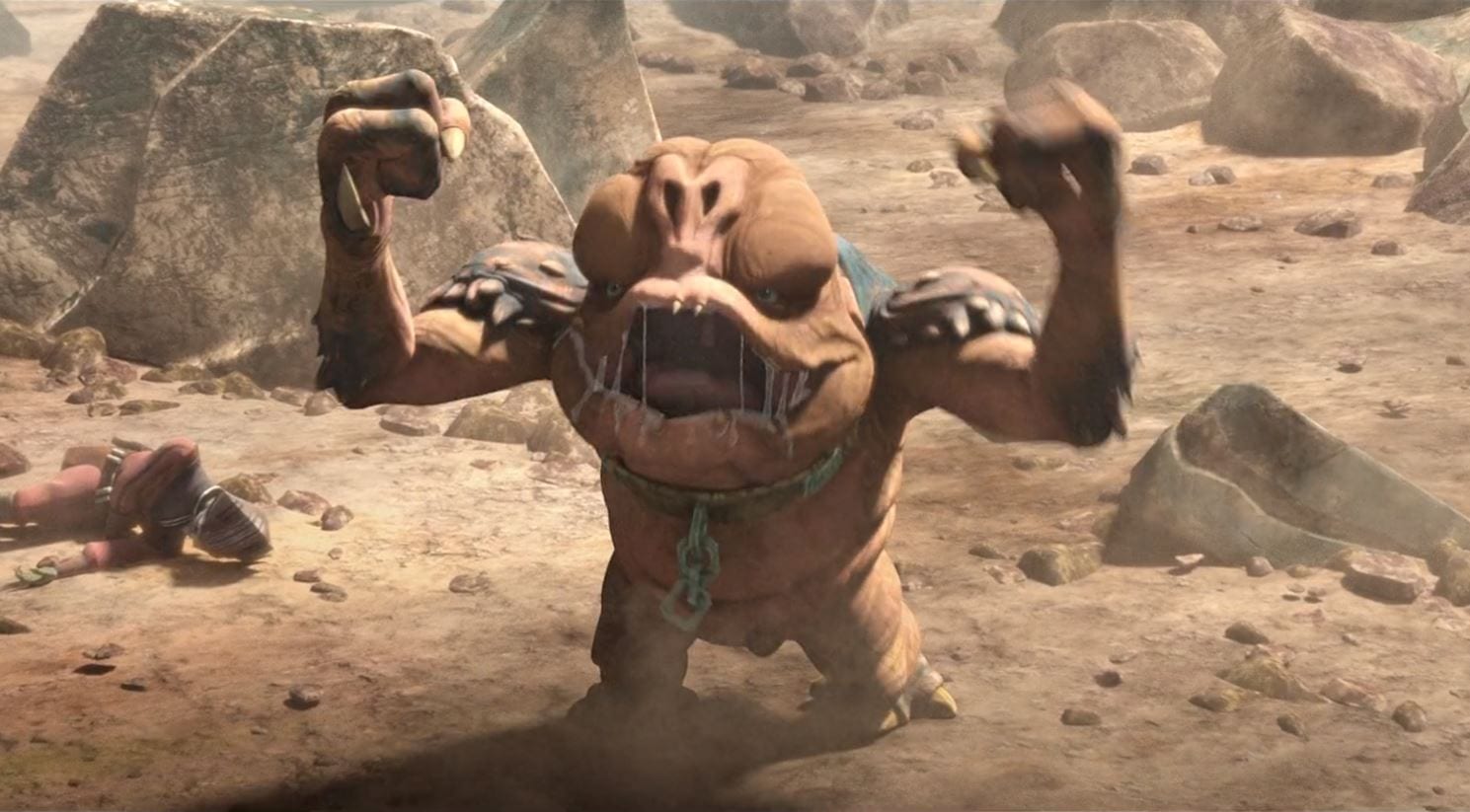 A fight breaks out between the Rancor and the Brezak as the Zygerrians try to recapture the Rancor. But The Bad Batch also has to take the Rancor back to Cid. So, they split themselves where Echo and Omega were to escort the captured slaves to safety while Hunter, Wrecker, and Tech were to follow the Rancor. During the chase, Hunter starts fighting the Zygerrian leader as he asks the other two to follow Muchi. Hunter

When Tech and Wrecker encounter Muchi, Tech informs Wrecker how a Rancor only conforms to beings stronger than it. So, Wrecker takes it upon himself to subjugate the beast. Wrecker and Muchi start to brawl as both of them look to incur heavy damage on one another. A little later as Hunter, Echo, and Omega return, they see Wrecker and Rancor exchanging slower blows as they both fall down. Muchi submits as they take the Rancor back to Cid. 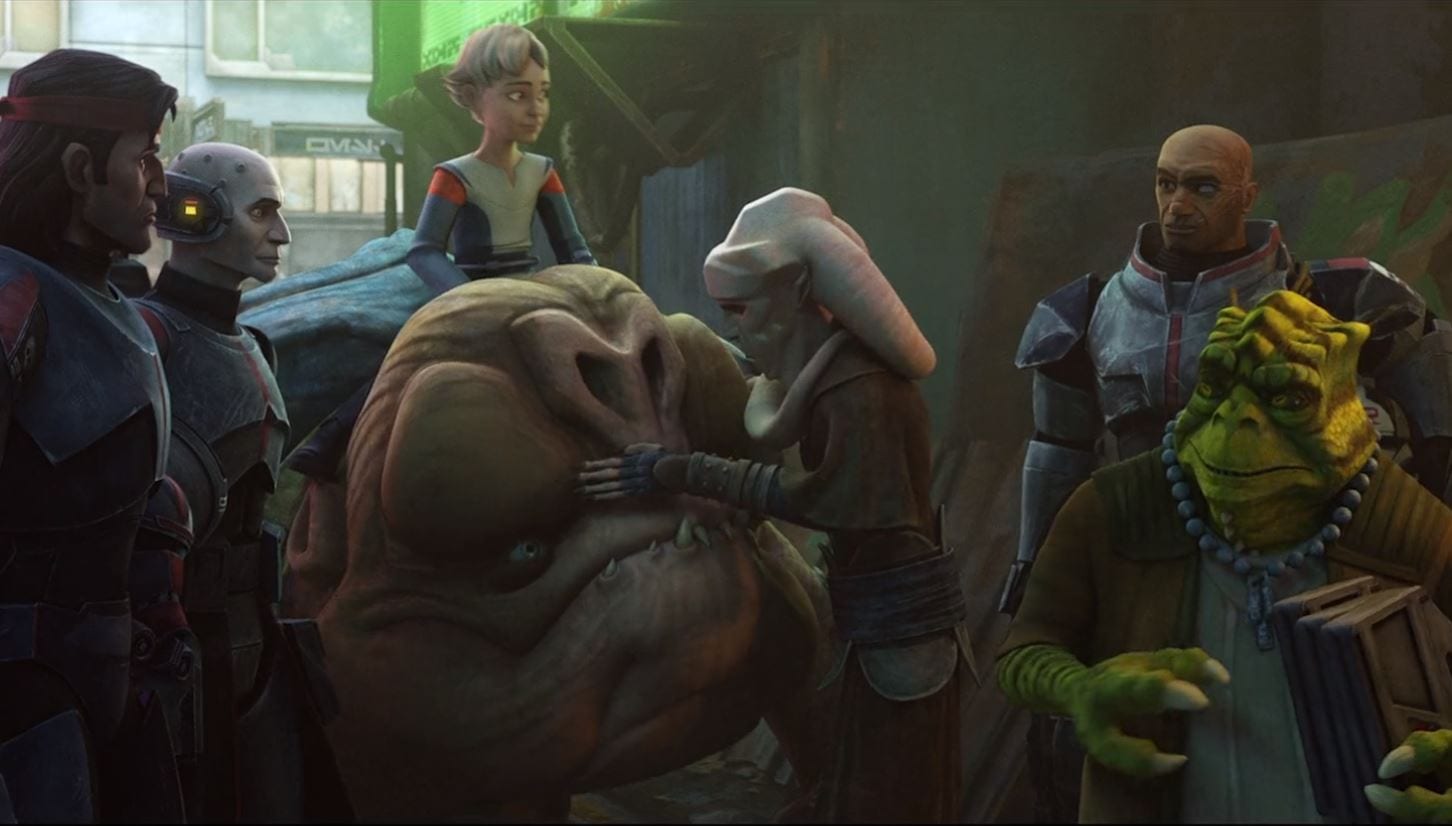 Here, Bib Fortuna, Jabba the Hutt’s Majordomo had already arrived to collect Muchi. While Cid herself was surprised that the Bad BAtch was successful on their mission, Bib hands off the compensation to Cid. Hunter and Cid enter Cid’s office where she informs him that the Bounty Hunter was named Fennec Shand. She was a new Bounty Hunter, nevertheless, she was already known for her notoriousness. Unfortunately, Cid was not able to find who gave her the bounty as Fennec was working under a direct commission paid to her instead of through the Guild. Seeing that such a threat was following the Bad Batch, Cid realizes that they were more valuable than she initially thought. The Bad Batch required Friends and Money so as Cid hands Hunter the share of their compensation, she offers her assistance for giving them jobs in the future. 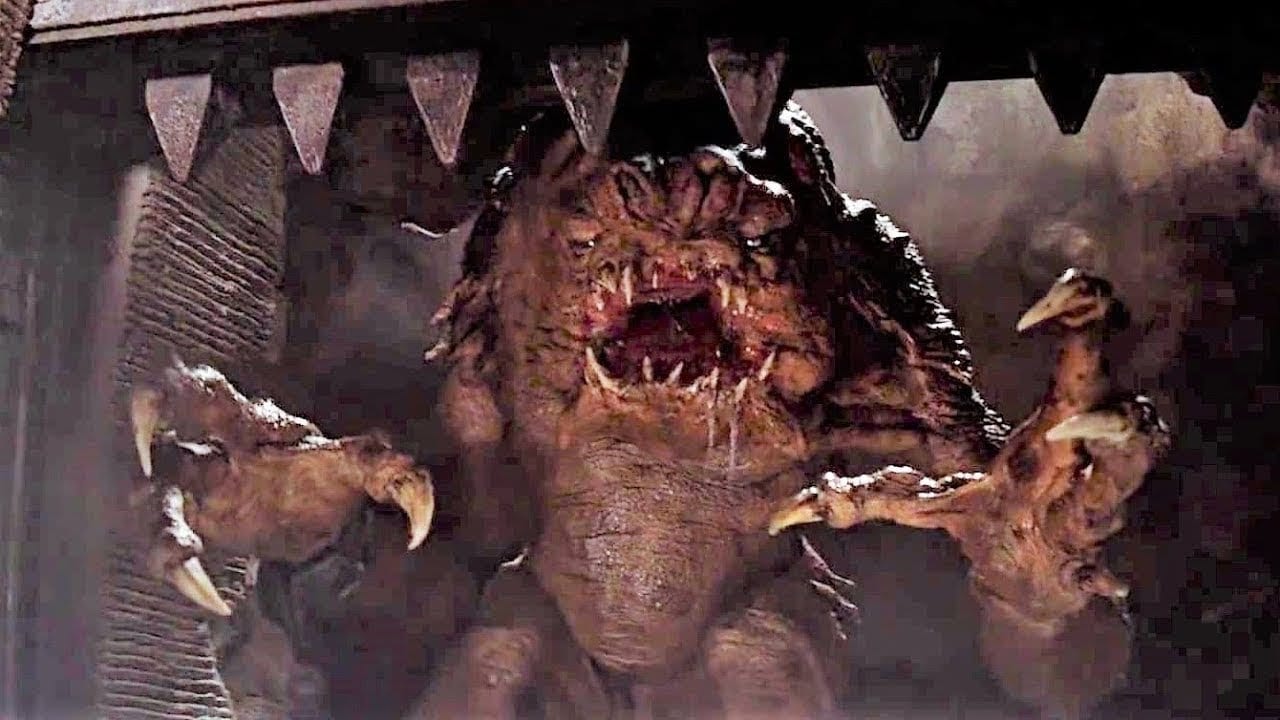 Firstly, there is a possibility that the Rancor we saw in this episode is someone we have seen earlier. In Star Wars: Return of the Jedi, we saw Luke Skywalker taking on a Rancor when he was captured by Jabba the Hutt. While that Rancor is named Pateesa instead of Muchi, there’s always the possibility that the beast was either renamed or they are related in some way.

Additionally, Cid was now onto the Bad Batch. She knew that they were very valuable to the Empire. Nevertheless, seeing that they were able to rescue Muchi, she realizes that they could be of use to her. She was often given missions by various clients. So, she could make use of them to complete missions while paying them appropriate compensations for the same. This could mean that we could see the Bad Batch turn to Cid more in the future for resources as well as intel.