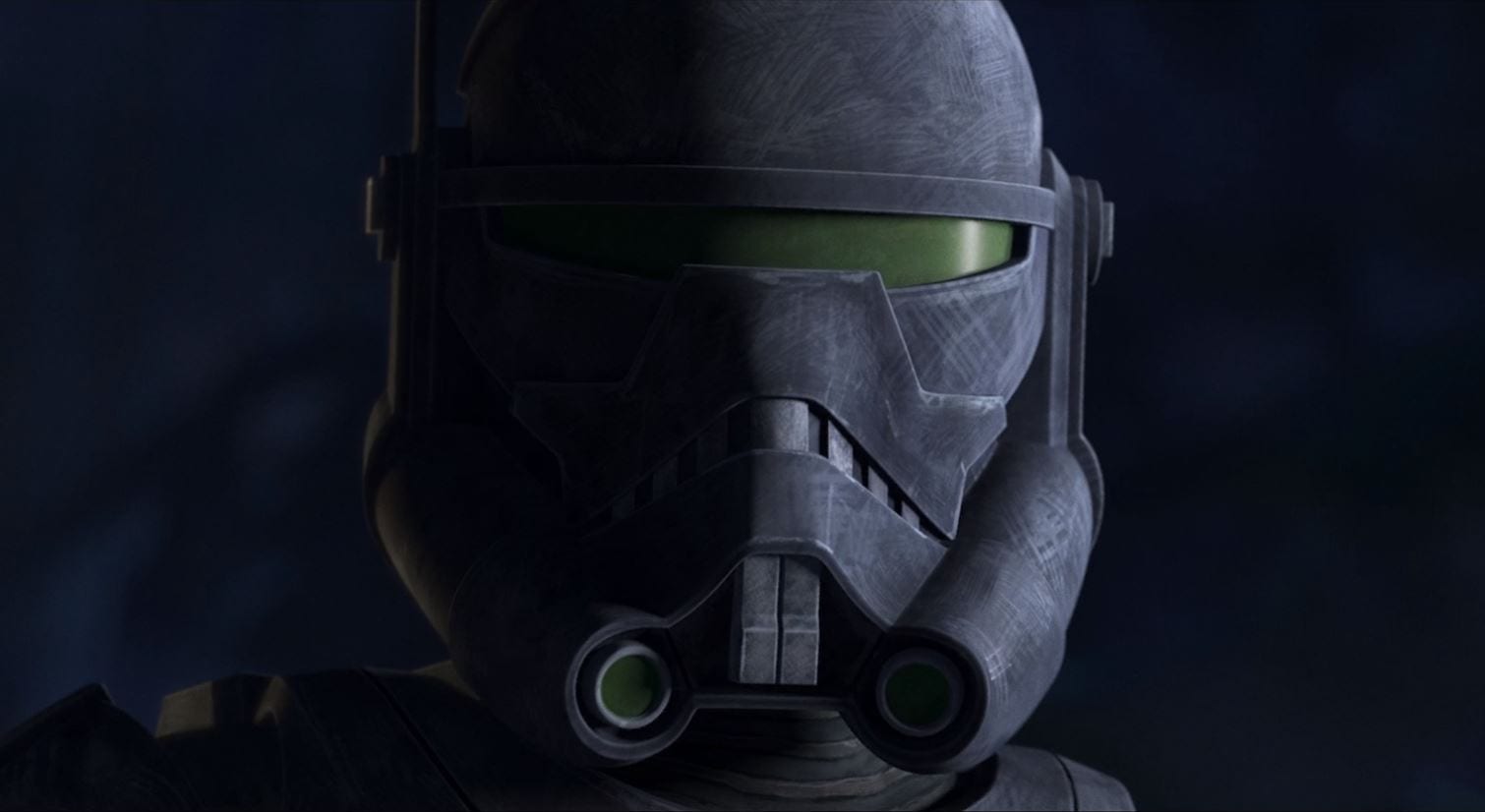 Star Wars: The Bad Batch is an animated show that acts as a direct sequel to Star Wars: The Clone Wars. This show features the enhanced group of five Clones called the Clone Force 99, aka Bad Batch. The events take place right at the end of the Clone Wars where Order 66 is initiated. This order has the clones comply to kill all the Jedi Masters. But unlike the regular Clones, the Bad Batch isn’t fully augmented to follow orders except for Crosshair who felt the need to do so. While the new Galactic Empire looks forward to strengthening their ranks, they see Crosshair as a valuable asset and have him augmented to follow orders. Meanwhile, the rest of the squad leaves Kamino with the seemingly fifth enhanced clone, young Omega. This article will discuss Star Wars: The Bad Batch Episode 4 Preview and Recap.

Now, the new Clone Force 99 was traveling through hyperspace on The Havoc Marauder. But ever since they have left Salecucami, they have noticed that there have been a few glitches in the system. Echo has been repairing it himself while Tech tries to build a scanner to check the functionality of their inhibitor chips. The crew is low on rations, and they must conserve it until they are able to obtain more food. Now that Omega is on the ship as well, they must take care of certain things. Omega has no place to sleep, and this is noticed by Wrecker when suddenly the ship drops out of hyperspace. So the crew quickly has to crash land on a desolate moon, after which Tech identifies the problem to be with the Ship’s capacitor. Luckily, they have an extra on-board. 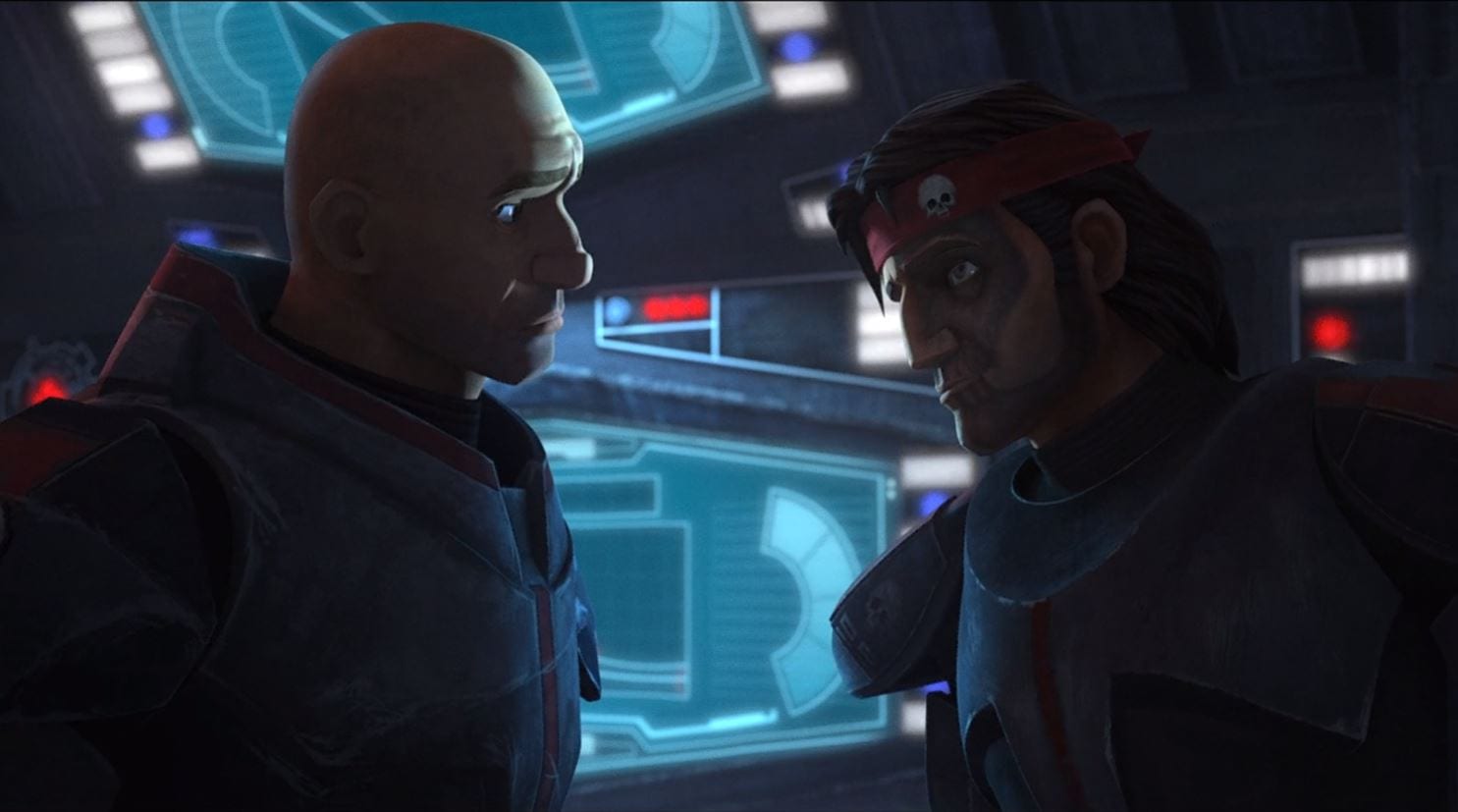 Star Wars: The Bad Batch Episode 3 titled “Replacements” has Tech and Echo replace the broken capacitor. Just then, they realize that there is something out there damaging the hull. At that moment, a creature comes and steals the capacitor as it moves across the windows. This startles Omega, as Tech is able to identify the creature as Ordo Moon Dragon, a creature that feeds on raw energy. While Tech and Echo make other repairs, Hunter decides to go after the creature on his own as Wrecker seems to have got a head injury during the crash landing. Omega asks to join him in the search saying how she was now part of the squad. To this, Hunter reluctantly agrees.

Hunter makes use of his skills to track the Dragon as Omega follows him around. He is finally able to locate the Capacitor. And just as he was about to pick it up, he is attacked by the Dragon which causes him to knock off his breathing mask. Omega tries to help her unconscious friend as she places the mask back on his mouth. She takes his blaster and follows the dragon to a tunnel where she locates its lair. Just as the dragon was about to attack her. Hunter wakes up and calls out to him. This distracts the Dragon giving Omega enough time to figure out a way to leave the tunnel, and get back to Hunter. After they get back on their journey, Wrecker reveals the room he made for Omega. 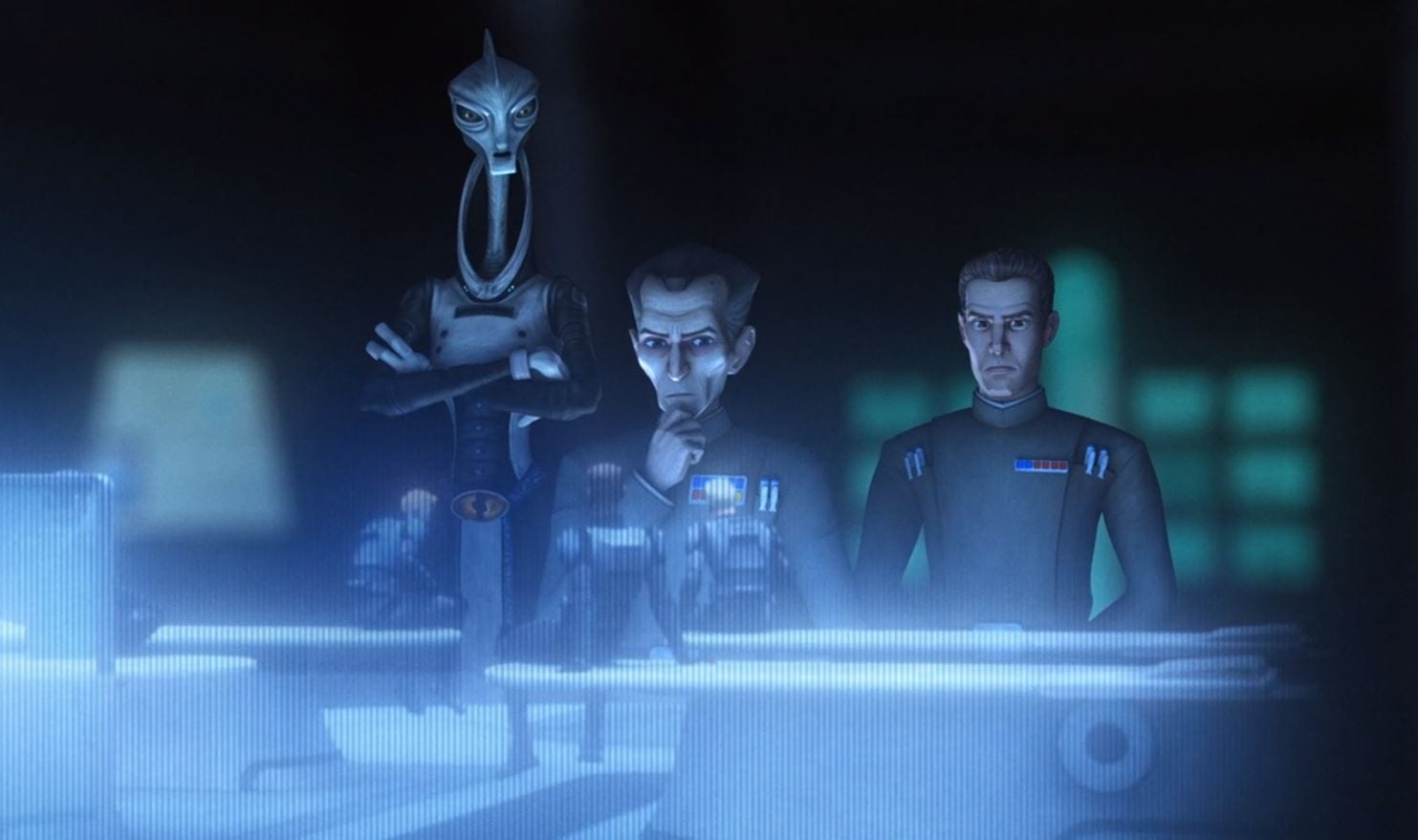 Back on Kamino, Admiral Tarkin, and Nala Se assess Crosshair’s augmentations. According to Nala Se, they are optimal, giving the Empire full control over the Clone Force 99 soldier. Just then, Rampart comes in, introducing his plan to have elite soldiers from all across the Galaxy be part of the Empire. He even introduces the two to his first Elite Squadron of four, who are to be trained under Crosshair. Rampart dreams about the possibilities of many such soldiers who could be trained under skilled clones. Tarkin likes the idea and decides to put it to a test.

On the mission to Onderon, we see one of the soldiers try to argue why Crosshair was made the squad leader. He soon gets the answer to this after the squad takes out the rebel soldiers. Crosshair was about to kill some civilians too when the soldier tried to stop this. Crosshair explains how he was made the Leader in order to check if the rest follow the orders. He kills the soldier after which the rest three reluctantly comply with killing the civilians. The soldiers return back to Kamino which has Tarkin impressed with the operation enough to name Rampart an Admiral as well. Meanwhile, Nala Se and Lama Su worry about their Clones starting to become obsolete. And therefore they look forward to using the DNA samples of the Bad Batch for future clones. 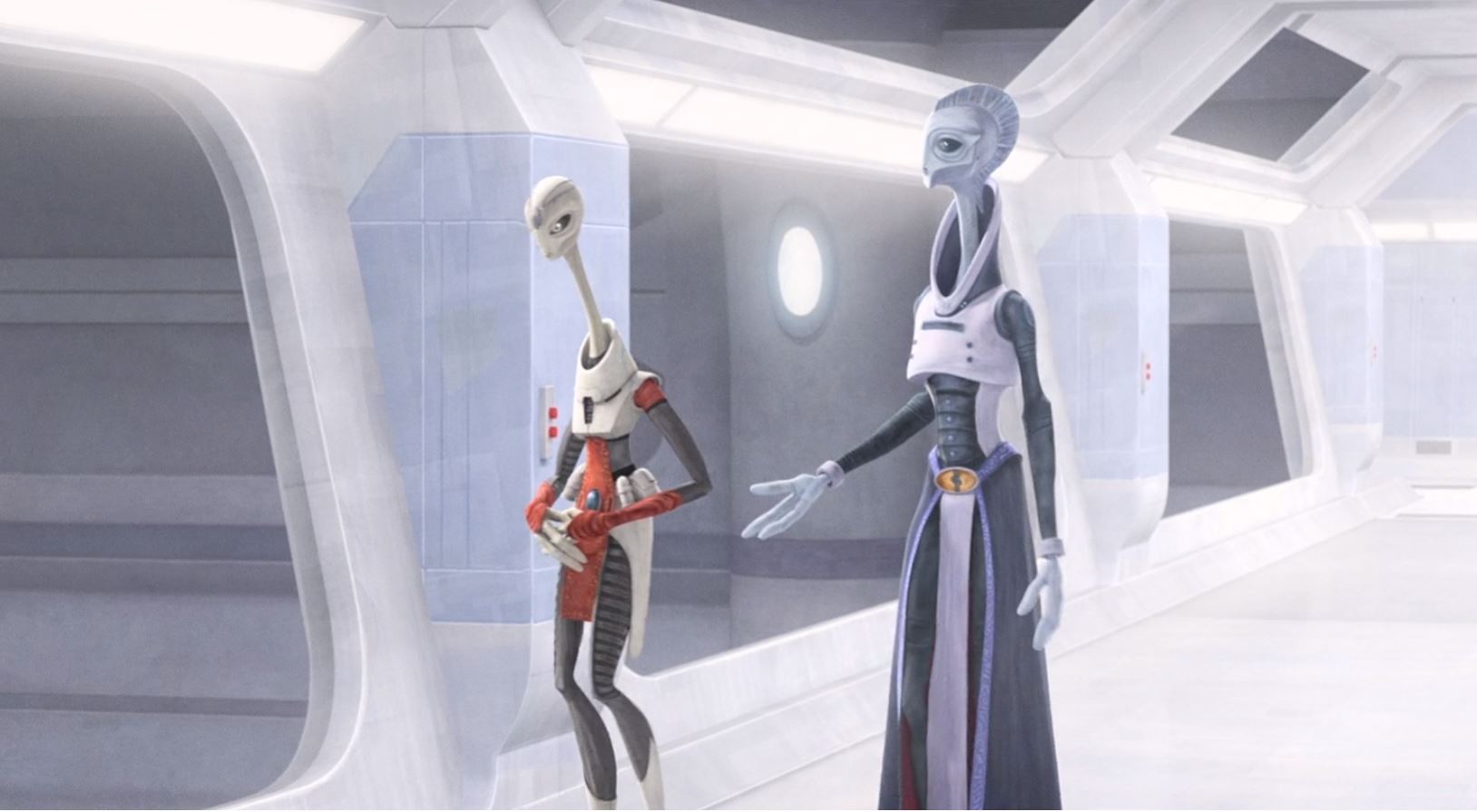 When will Star Wars: The Bad Batch Episode 4 Release? 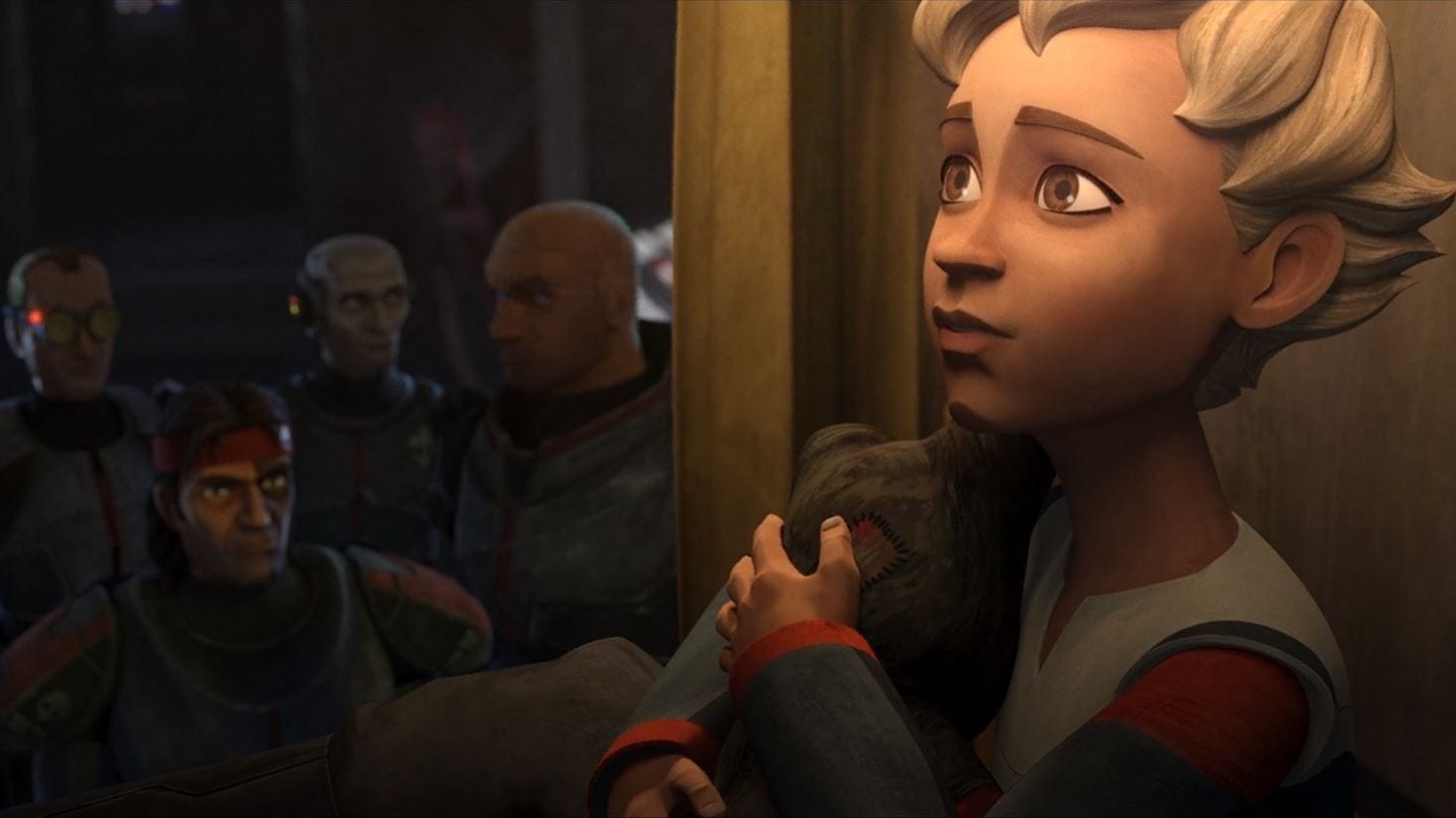 Star Wars: The Bad Batch Episode 4 will have much to do with the relationship between the members of the Clone Force 99. Omega has now officially joined the crew with her having her own mini room made by Wrecker. She has shown her heroics twice. Once when she helped Cut and Suu with the chain codes, and another while retrieving the stolen capacitor. It seems like Omega has a lot of potential but her specialization still hasn’t been identified. Future episodes of the series could have her try out different things to see what she thrives in. In the trailer for Star Wars: The Bad Batch, we saw Omega wielding a cybernetic bow and arrow. Only time will tell if that happens to be her specialty. One thing to be noticed is her eagerness to learn new things, like the Hunting skills like Hunter.

Meanwhile, Crosshair has become an ideal clone to the Empire. He complies with orders and is equipped with a high skill set to do so. In the previous episode, he led four of the elite human soldiers. But during the mission, he had to make some vital decisions as he killed one of them. The soldier wasn’t following the order to kill the insurgent civilians, and therefore Crosshair had to eliminate the useless soldier. According to him, a soldier is supposed to follow the orders given to him. Hunter and the gang are still affected by Crosshair’s change in allegiance. But they know it isn’t truly his fault, so they must come up with some way to bring him back to the Bad Batch.

Also Read: How To Watch Star Wars: The Bad Batch?

All the episodes by Star Wars: The Bad Batch can be watched when they air exclusively on Disney+. These days, most shows tend to be a streaming exclusive, and Star Wars: The Bad Batch is no exception. The only way one can watch the show is if they subscribe to Disney’s Direct-to-Consumer Streaming Service. Star Wars’ Production Company, LucasFilms was acquired by The Walt Disney Company, due to which all the Star Wars content has become available on Disney+. While also airing animated shows like Star Wars: The Clone Wars, and Star Wars: Rebels, Disney+ also has all the 9 Episodes, The Mandalorian, and also all the standalone movies.

The Season Premiere for Star Wars: The Bad Batch had a runtime of 70 minutes which left the fans with a pretty good idea of the plot. But after this episode, Star Wars went back to its original runtime of below 30 minutes. Episode 2 had a runtime of 27 minutes while episode 3 “Replacements” ran for 24 minutes. There is always the possibility that we may get longer episodes somewhere closer to the season finale. This would bear resemblance to WandaVision which aired only a few months ago on Disney+. And if we look at all the new shows Disney+ have been releasing at the moment, it is safe to assume that there will be no mid-season break in Star Wars: The Bad Batch.

Also Read: Star Wars: The Bad Batch – What’s It About? Is It Worth Watching

How to get a Disney+ Subscription?

In the US, one can subscribe to Disney+ in a bundle along with ESPN, and Hulu. This bundle would cost $13.99 a month. Meanwhile, one could also get Disney+ on a solo subscription for $7.99 a month or $79.99 a year. The yearly package would cost you what you would have paid monthly for 10 months, along with which you would be receiving a 2-month subscription for free. In India, The Walt Disney Company has collaborated with Star to rebrand Hotstar as Disney+ Hotstar. One can subscribe to Disney+ Hotstar monthly for ₹ 299, or even get a yearly package for a collective rate of ₹1499.