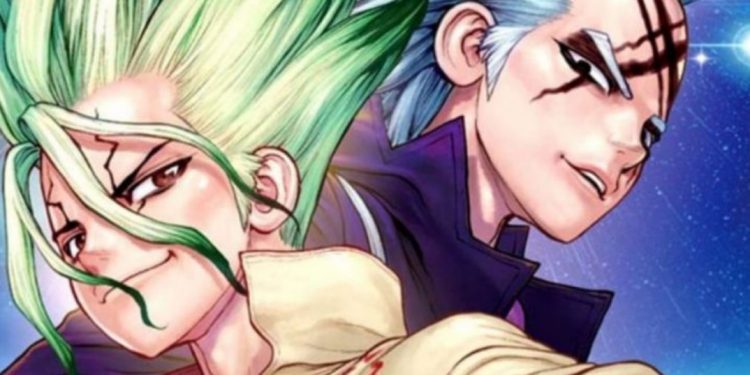 Ryusui noticed that Senku was passing nearby and called out his name. He tells Senku that he has questions for him and asks about a knight in the Medieval Kingdom. Senku wonders why Ryusui was referring him to a knight. Ryusui tells Senku a story about a knight who has to protect the princess, but that knight fell in love with the princess. One day, the knight stood near the castle and offered a red rose to the princess. He told the princess to have a future with him.

But the princess has a line of princes who asks for a hand in marriage, and they have also proposed to her. A prince from the next kingdom was on the top list and visited the royal palace one day. He falls on his knees when he meets the princess and proposes to her. The marriage between the prince and princess will settle things and bring peace around the country. Ryusui asks Senku what he would do if he were that knight who falls in love with the princess.

Ryusui takes off his hat, and Senku wonders why Ryusui wants him to solve that case of the princess. Senku reveals what he would have done and reminds Ryusui that he asked when he knew what he would say. Dr. Xeno is at the hill with Gen, who notices something. Gen thinks that Dr. Xeno is playing it cool. Dr. Xeno is surprised by Senku’s proposal and realizes that Stan was a Legendary Warrior. He believes that they might take the world without fail if they allied. Senku and Ryusui had their say and said that they would reveal the truth.

Xeno realizes that he threatened them to ruin the rocket engine if they don’t revive Stan. Ryusui tells Xeno that he must not carry the burden of the villain role. He also reminds him that he can not accept that he is one of the Kingdom of Science members. Kohaku, Chelsea, and others heard about Stanley’s revival, and they were shocked. But Chelsea is glad that Stan will be the rocket pilot since Ryusui has decided that after thinking. Gen reveals that Tsukasa will escort Xeno. Tsukasa feels like he is guarding a VIP.

Dr. Xeno says that if Stan rampages, Tsukasa will handle him, and they can call him a hostage if they like. The crew thinks that the moment Stan wakes up, he will take a gun and begin to shoot them. They know that the moon mission is deadly; they will save all humankind once they arrive there. Ryusui confesses that he will revive Stan since he might be an Ace pilot, but he lacks shooting skills. They know that Stan is suitable for that, and they go there and revive him. Xeno explains everything to Stan.

Dr. Stone Chapter 222 will be released on 12 December 2021. Stan lights his cig and accepts what Xeno told him. Senku is glad that Stan understands Xeno. Xeno knows that Stan will handle any meaningful task. They talked about Stanley’s target and that he will be shooting Medusa at 60 meters per second. Stan reveals that the shooting angle will be 0.13 degrees. Ryusui also decided to polish his skills. Senku, Kohaku, and Stanley are the selected candidates for the moon. Let’s look at Dr. Stone Chapter 222 official details.